Many people who know me well were surprised to hear that I gave up many other events last week-end to attend the Silver Spur Awards, which is basically all about cowboys. It’s put on by the organization Reel Cowboys and let me tell you–it was a blast! I actually have more to say about this event than about most others!!! 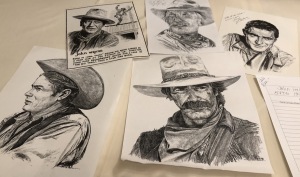 One of the silent auction items, which pretty much sums up this famous cowboy event. Photo by Karen Salkin, as is the big one at the top of this page.

I wanted to go to this awards dinner not only because I was a major Roy Rogers and Dale Evans fan growing up, (and let’s not forget Buttermilk, of course!,) but also because one of my most interesting acting gigs in my career was a Western, with David Carradine, to boot, in what I believe was his last film. We found-out that morning that he had received a Golden Globes nomination, so the shoot that day was extra exciting.

I think my training for winning the role of Emma May Crawley, the Mayor’s wife, (who’s the fancy lady of the town,) was not just my years of acting leading up to it, but also the many instances of hanging-out with the rodeo stars in Aspen for a few summers. They were all much sweeter and more shy than expected. (They called my friends and me, “Ma’am,” like little kids, even though we were all the same age.) But, boy, were they rugged! Much more so than the actors who played them in my film, even though those guys held me hostage in a bank for the duration of it! 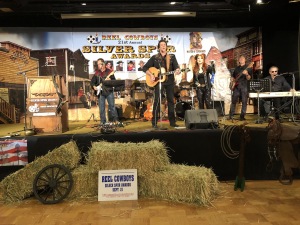 The band. Photo by Karen Salkin.

All those experiences led-up to me being happy to be an audience member for the Silver Spur Awards at the Sportsmen’s Lodge in Sherman Oaks.

When I arrived with my friend Diane (who deemed this to be “a fun and certainly different event,”) we were stunned to see that at least three-quarters of the guests were outfitted in cowboy and cowgirl attire! I would have totally gotten into the swing of it had I known. I thought I was cool with my Santa Fe earrings—one a cowboy boot and the other a cactus—and rocking a horseshoe nail around my neck. But I had nothing on the other guests! So I’m getting next year’s outfit ready right now!

The evening began with a beautiful silent auction, with the assemblage being serenaded by the Steve Waddington Band, who are the epitome of country music! 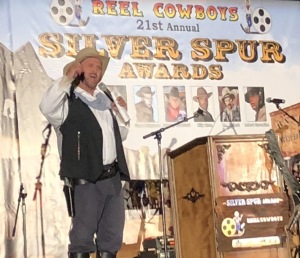 This is one of the few charity banquets where the food came pretty quickly, which I, of course, was happy about. The Caesar salad that we began the dinner with, was so perfect that I could have eaten five of just them, and nothing else, and been happy.

While we chowed-down (cowboy talk) on that, “Festus” tribute comedian Mark Staggs regaled us with his clever jokes, (some of which took a second to think about.) I think I laughed harder at them than anyone else in the entire ballroom! (And, unlike what crazy Jeremy Piven did at a different charity event that same week-end, Mark did not feel the need to curse-out those who were not paying enough attention to him!!!) 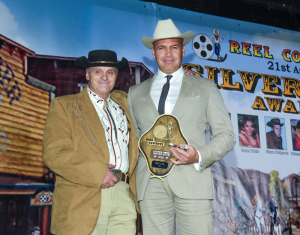 Billy Zane on the left with his award from Reel Cowboys President Robert Lanthier. Photo by William Kidston.

Then Reel Cowboys President, Robert Lanthier, took to the stage to greet everyone. He introduced the luminaries in the crowd, which included Katherine Ross, Stefanie Powers, Gilligan’s Island’s Dawn Wells, and my table-mates, Billy Zane and Neile Adams McQueen, an adorable former dancer who was Steve McQueen’s first wife. An interesting adjunct to the event for me is that I had connections to so many people there, which made it that much more special, but I’ll tell you all that at the very end of this review. 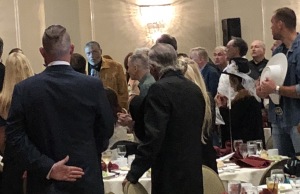 Rosey Grier on the left center, facing us, giving the invocation, which the assembage is obviously riveted to. Photo by Karen Salkin.

The one old pal I will tell you about right now is former football player, Rosey Grier, who is now a minister, so he did the invocation for the event. Truth be told, I wasn’t even sure what an invocation is, so when he told us to say something like, “I am precious, I am valuable, and there’s no one like me,” I thought he was just copying what I think about myself every day!!! (It was actually a little Stuart Smalley-esque, but I always believe in positivity, so I’m down with affirmations like that one.) 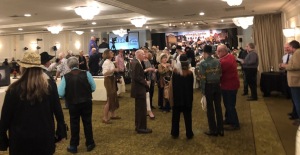 Some of the many guests happily mingling before they sat down for dinner. Photo by Karen Salkin.

Many awards were given out to people who have played cowboys on both big and small screens, hence the apropos moniker “Reel Cowboys,” as opposed to real cowboys, (although I was happy to sit next to one of those all night!)

But the presentation that got to me the most was one by the Taurus World Stunt Awards Foundation, which appears to be a godsend for injured stunt performers. I have such respect for the men and women who constantly put life and limb in jeopardy to bring exciting entertainment to the world. I can’t even ride a bicycle! (That is not a joke—I really cannot.) 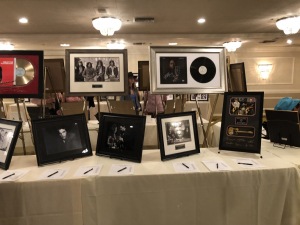 Just a small part of the silent auction. Photo by Karen Salkin.

All in all, the Silver Spur Awards banquet made for a really enjoyable evening. The awards themselves were interesting, the dinner was delish, the music absolutely perfect, and the crowd enthusiastic. Even the programs were beautiful! (And informative.) And even better than all of that, a lot of money was raised for worthwhile causes. I now look forward to next year’s event! Maybe my western movie will even be honored there. (But don’t hold your breath; it was–how shall I put it?–not the finest movie ever made. And that’s being kind! Very kind.)

Now, as promised earlier, here are just a few of the connections I have to so many people in attendance: 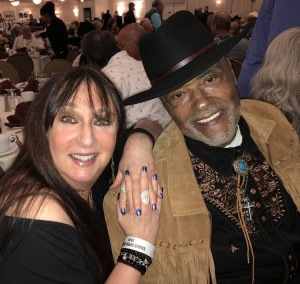 Stefanie Powers’ darling late mother, Julie, used to call me after many of the episodes of my former television show, Karen’s Restaurant Revue, aired. She loved to dish about my wardrobe and about several of the celebrities that she and I both knew. And she always seemed as proud of me as she was of her own TV star daughter!

Speaking of my show, that’s how I connected with Rosey Grier so often! Before I even began doing KRR, Rosey and I used to work-out at the same small gym, and he was always so lovely and helpful to me. And when the show started airing, he would always critique each episode the next day at the gym, and was always very complimentary about them. He was one of my very first celebrity fans, so, even though I hadn’t seen him for many a year before the Silver Spurs, I’ve eternally had a soft spot in my heart for him. 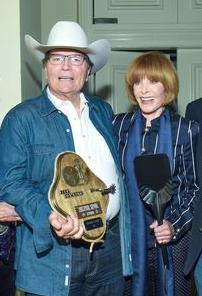 I did one of my first celebrity charity events with movie cowboy Patrick Wayne! We were two of the celeb waiters and waitresses, whom the public paid to have serve them. Instead of running back and forth to the kitchen, Patrick got to hang behind the bar to serve up the drinks, which teetotaler moi had no idea how to whip up, of course, and he was very charming and helpful to me the whole day.

And in that western film I mentioned before that I did, the man who played my husband was the late Ed Lauter, whose cute wife Mia was in attendance that night. I had met her just briefly during that film, but she and I bonded on a break in the action at the Silver Spurs, and I was happy to discover that she’s adorable.

I wish I could have chatted with every acquaintance I had at these fun awards, but between paying attention to the awards themselves, taking the notes for this story, dining, perusing the silent auction, and socializing with the other guests at my table, there just wasn’t enough time. But I hope to see them all again…either here again next year, or out on the prairie!!!