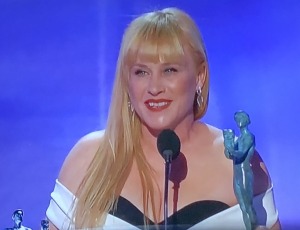 Just had to put this pic of Patricia Arquette up here, because it’s the best her hair (and face, too, actually,) has ever looked! Photo by Karen Salkin.

Even though, as a proud member of SAG-AFTRA, I voted for these awards, I have to say that the SAG Awards are pretty much always the most boring awards show of the year. But this year’s rendition was the worst ever! (But compared to an opposing network’s production of Rent: Live that was broadcast last night, too, it was brilliant. That’s how bad that show was!)

But there was one bright spot—our time didn’t get wasted with any arrivals shows because…there were none! I think there were one or two on-line, but who wants to watch that stuff on a computer?! Or worse–a phone screen! They’re bad enough on a big TV!

So let’s get right to the actual awards show: 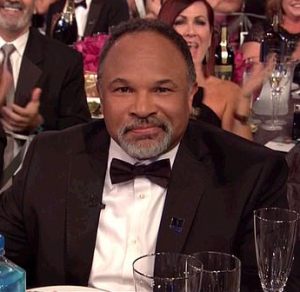 The best part of the evening, by far, was the little “I am an actor” vignettes at the top of the broadcast. Mike Myers‘ story about how much more supported the arts are in Canada was eye-opening. And the crowd went nuts for Geoffrey Owens, the man who had been a regular on The Cosby Show way back in the day, and then was recently discovered being a check-out person at a New Jersey Trader Joe’s! Because of that unwanted publicity about that situation, he’s now back on the small screen, in a Tyler Perry series! Now that’s an inspirational show business tale.

Megan Mullally was a dreadful host. She totally bombed. Boy, did her bits, throughout the entire telecast, fall flat. 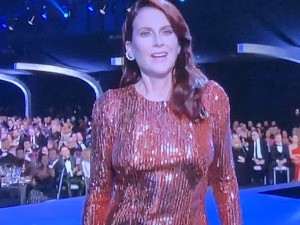 Megan Mullally and her sagging, lopsided breasts. Maybe she was just reminding us that we were, indeed, watching the “SAG” awards! Photo by Karen Salkin.

And she really needed a bra/to stand-up straight/Spanx. Not only were her boobs sagging embarrassingly, but they were two different lengths!

And that awful voice was making my ears bleed!!!

Whose dumb idea was it for her to host in the first place??? This show was so much better when it didn’t have a host.

Megan’s awful bit with Alec Baldwin could not have been more uncomfortable. For us and them.

As for the rest of the guests, presenters, and winners: 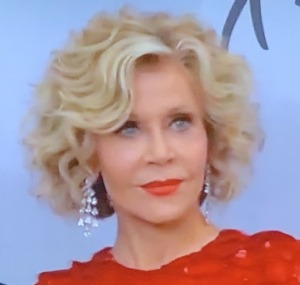 Jane Fonda. I was going to use a much more sharply-focused image here, but I’m sure she’ll appreciate this softer one. I know I would! Photo by Karen Salkin.

Jane Fonda definitely does not want to go gentle into that good night, which I give her tons of credit for. I’m sure that I will follow suit!

It’s nice that Rachel Brosnahan acknowledged the extras on her show. But to call them “artists” is more than a reach.

I’ve never liked Tracy Morgan, but that was just creepy that he started to announce the winner without first saying the nominees. And he called the winner of Best Comedy Series The Marvelous “Miss Mavel,” when it’s “Mrs. Maisel.” How rude of him! 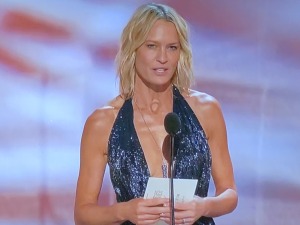 Emily Blunt’s acceptance speech was adorable. Mr. X and I both voted for her for Supporting Actress, so we’re glad to see that the majority of our fellow actors felt the same way.

What is Robin Wright’s next role? Tan Mom?!

And—I’m not joking here—did she once have a tracheotomy? I’ve never before noticed that “hole” in front of her larynx. 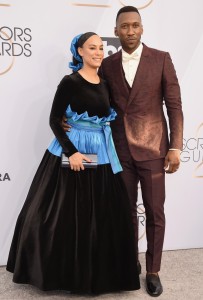 Mahershala Ali and his wife. Does she not have a mirror in her house???

Was Mahershala Ali’s wife auditioning for The Handmaid’s Tale with that hideous outfit???

I’m happy that Mahershala Ali won, since we voted for him, too, but he should have definitely been in the Leading Actor category, not the Supporting one.

I like that Glenn Close and Michael Douglas presented together. They both still look good. Actually, Glenn looks the best she ever has. She looked this age when she appeared in The World According to Garp…thirty-seven years ago!

Patricia Arquette sure likes to pop her boobs out!!! But her hair looked the best it ever did, by far. And good for her that she thanked Robert Mueller! 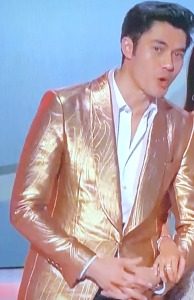 How gorgeous is Crazy Rich Asian’s Henry Golding??? And I love his equally-gorgeous accent, too!

When I was little, I used to love Alan Alda solely because he loved his wife so much.

I really enjoyed Jason Bateman’s speech, even though he mentioned his former show (Arrested Development) and not Ozark, the one he won for!!!

The In Memoriam section gets sadder all the time. Or is that just me?

You know how I hate mispronunciations, and it really annoyed me that the announcer called Hugh Grant “You,” without the “H” sound in front. People sound like idiots when they speak like that. 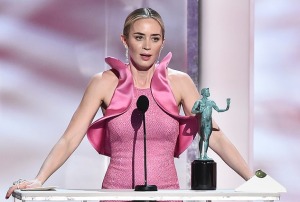 Emily Blunt and her somewhat controversial dress. People likened it to female private parts. But I liked it.

Hugh Grant was the only honest person on there—he admitted that he’s never seen any of the nominated shows he was announcing. You go, boy!!! [Note: The pic at the very top of the page is apropos of nothing. I just thought it’s really interesting to see the old guard, Hugh Grant, and new guard, Timothee Chalamet, together, equally puzzling over what someone was saying on stage.  Photo by Karen Salkin.]

I watch This Is Us only to see the little surprise that’s at the end of each episode. And even though I do not watch the other nominees in this category, they all looked like they deserved the award so much more than This Is Us! (Perhaps many of my fellow SAG members also watch network shows only. Who has time for all these cable, satellite, auxiliary channels??? Surely not yours truly.) 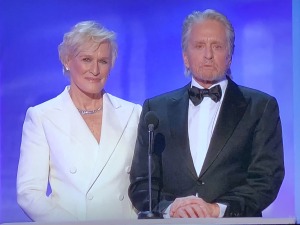 It’s ridiculous that Rami Malek won the award for Leading Actor in a Movie! Yes, he is excellent as Freddie Mercury, but I really think he won because the way more deserving Viggo Mortensen and Christian Bale split the smart votes.

Glenn Close’s acceptance speech about “two eyes looking into two eyes” being something like the one honest form of communication, or something like that, made me cringe. That was so offensive to sightless people. Does she think they don’t count? 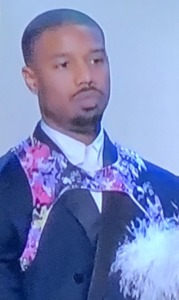 Jodie Foster looked great.  But it was strange to have her present the biggest award of the night when she hasn’t made a movie in many years.

What the heck was Michael B. Jordan wearing??? It looked like a harness!!!

I know that this is not as in-depth as my usual awards show reviews, but I have too much going on in my own life right now to be as concerned with strangers as I usually am. And, as always, I tweeted a lot of my thoughts as the show went along live, and I don’t like to repeat myself. So, if you don’t want to miss any of my bon mots going forward, why not take this opportunity to follow me on Twitter right now, in plenty of time for next month’s Oscars? My “handle” there is @MajorCelebrity. You will not regret it. (Unless you’re a badly-dressed celebrity.)