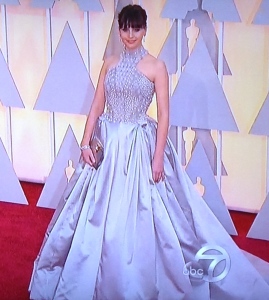 Felicity Jones, winning the night in both fashion and niceness. Photo by Karen Salkin.

Yesterday was a long day and night.  The show itself was good enough, but far from great. Most of it was pretty ho-hum.  It was three and a half hours long, and got good only in the last third or so.  It picked-up with the Glory number.

I tried to watch all the arrivals shows, (even trying again late at night, when it was all over,) because I really want to review it all for you, but I just could not force myself to watch the idiots on E for more than a second every now and then. So, there will be no reviews of their inanity this time. One girl can do only so much. (And if I thought that the Ross guy’s voice was unbearable, I certainly could not handle the one on the tubby Kardashian chick!) 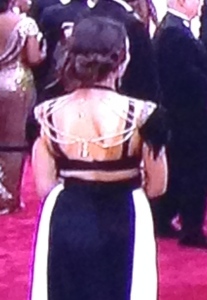 The opposite of the pic above. Why would this woman wear this outfit when with her back fat??? Photo by Karen Salkin.

So, here are my thoughts on all the ABC proceedings, from start to finish. [Fun note: Can you guess why I choose the photo at the very top of this column? Give up? It’s because that woman in the middle was tripping on the stairs! Now that you know what’s happening, can’t you see it?] With so many shows on, (arrivals, the Oscars itself, post shows, party shows,) some things have understandably slipped through the cracks, of course. This is a bit shorter than usual because I tweeted a lot, (@MajorCelebrity; they’re all still up there, if you’d like to read them, and make sure to follow me now so you don’t miss out next time,) but here are some more of my thoughts, in order that they all happened: 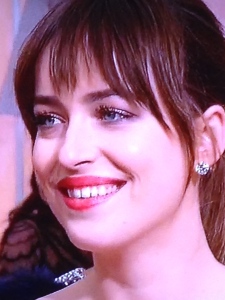 Good for Patricia Arquette to not try to cover-up her numerous wrinkles, especially around her mouth and on her neck. That’s refreshing to see in Hollywood. But why would her rich fam have never gotten her braces???

That’s probably the first time Melanie Griffith was asked to step aside to shoot someone else alone–her daughter!

Speaking of her, Dakota Johnson said, “I feel like I’m very, very lucky to be in the position that I’m in.”  That’s the understatement of the year! And she needs veneers. (I tweeted about her rudeness to her mother in a later interview. I think I was the first one to do so. Mr. X told me not to bust her on it, but it turns-out that I was far from alone on this one!!!) 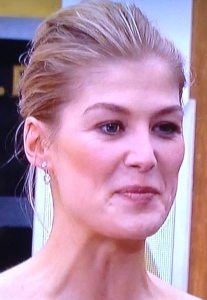 See what I mean about Rosamund Pike’s eye? Photo by Karen Salkin.

Adam Levine and his wife look like they don’t even know each other.

Rosamund Pike said of Oscars host (and her Gone Girl co-star) Neil Patrick Harris, “I’ve never met a greater snowman.” I like that.

Interesting pearl dress on Lupita Nyong’o. Mr X asked, “How many clams gave their lives for it?”

Emma’s mom is so cute-looking. But her face looks more like Melissa McCarthy than her own daughter. (Lucky for her!)

Why would Lady Gaga feature a side boob, especially when it’s so saggy? And her crazy red gloves looked like she thought she had to go in the back and do the dishes!!!

I could tell Neil Patrick Harris was nervous at first; he hit some bad notes, but he warmed-up halfway through the song.

What a self-serving speech from Best Supporting Actor winner JK Simmons. It was so pompous.  You could just see him thinking he was so clever to tell us to call our parents, even though that had nothing to do with his role, nor circumstances. He totally neglected to thank his wonderful co-star, Miles Teller, without whom he never would have been able to go so deep into the performance, nor the director of Whiplash, Damien Chazelle, who gave him this marvelous opportunity to begin with!!! Somehow, I get the feeling that portraying that kind of rage in the film came naturally to him. Just sayin’. 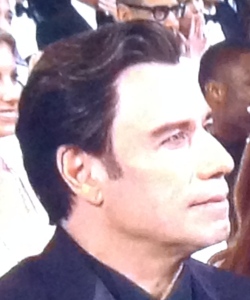 Nicole Kidman looked awful. That was a horrible dress, and you could tell that her hair totally got caught in the rain!

That was some hairpiece on John Travolta! I guess he decided to stop pussy-footing around about it, and go whole hog on the head. As Mr. X pointed-out, he certainly did not want that to get caught in the rain!!!

Keira Knightley‘s husband looks so young.  Somehow, I like her more for that. 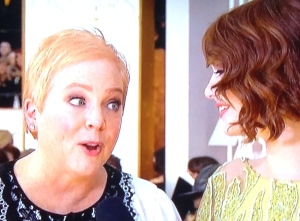 I don’t really know who she is, but I appreciated how well Chloe Moretz pronounced all the visual effects’ peep’s names. I’m sure so did they.

That was the absolute best that Anna Kendrick ever looked. Or could look, ever.

Jessica Chastain was horrible in announcing a winner. When she opened the envelope, she just slowly said, “Cheev-o,” which is probably her cozy name for guy, whoever he was. She didn’t announce his name, nor the film he won for. Everyone was confused. Mr. X said she was “stunningly rude to the other nominees.” What an idiot, and so inappropriate for the occasion. 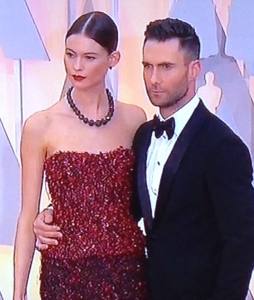 Adam Levine and his wife, looking like uncomfortable strangers. Photo by Karen Salkin.

Meryl Streep‘s outfit, a mixture of business and a little glam, was so perfect for her.

She was the perfect person to introduce the In Memoriam segment. She was truly choked-up.

The pictures they used of it were beautiful; instead of actual photos, they featured stylized portraits of the people’s younger selves.

And I’m glad they ended with Mike Nichols.  That’s why Meryl was so busted-up.

I’m glad that no one sang during the tribute, as they’ve done in a couple of other years.

Jennifer Hudson certainly gave it her all.

It was so rude of Neil Patrick Harris to say that Jennifer Aniston and David Oyelowo “deserve” to be there. That made it seem like they were lesser than the rest, (because they weren’t nominated when they were maybe expecting to be,) but we should accept them anyway.

Octavia Spencer‘s dress was actually great for her! And the earrings went correctly with it, too.

I think they introduced all the songs with little blurbs just because they wanted to do so for Glory.

Glory is no It’s Hard Out Here For a Pimp…thank goodness!

Excellent presentation for the Glory performance.

I’m thrilled for Eddie Redmayne. Totally deserving win. And he’s always so nice. I feel bad for Michael Keaton to have done his film the same year as Eddie’s, but that’s show biz, folks!

Julianne Moore, being all pale and hunched-over. Photo by Karen Salkin.

I’m also happy for Julianne Moore. But, you don’t wear a white dress when you’re that white yourself! And she really needs to take posture lessons already!

My final thought on the Oscars is this:  something’s wrong with this business when Leonardo DiCaprio doesn’t have an Oscar, and the insurance commercial guy does.

(I know many of you want to know what I thought of Lady Gaga’s performance, but you’ll have to check my tweets for that one. Clue: I was not a fan. I don’t know why everyone’s saying how good it was. It was not.)

And that’s it for awards shows for awhile.  I’m so glad they’re finally over!  But, in the next few days, I begin telling you about all the fabulous gifting suites that came along with the Oscars!  So, awards season won’t be officially over until we’re done with the suites.