Back in the day, when I used to go awards shows, the Golden Globes was my fave. It was the easiest to mingle at, and that we got to eat dinner before and during it totally helped put it over the top! It was more of a party than a stuffy awards show where it was hard to move. 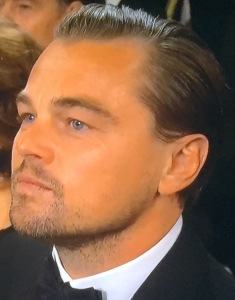 Leonardo is so gorgeous, and beautiful as a person, I thought you’d like to see his stunning visage twice! Photo by Karen Salkin.

And then, a few years ago, when someone had the genius idea to throw all the parties at the same hotel, the Beverly Hilton, (which is basically down the block from me,) that made it even better. I skipped the show itself, and went straight to the parties! All night! And each one was so different, in the same venue. I loved it all.

But now, for many reasons, including the fact that I live-tweet the show, I enjoy staying home and watching from the comfort of my couch. I had been at a pal’s baby shower all day yesterday, and was too exhausted to move by the time I got home. So, my mind wasn’t as sharp as it usually is when I’m reviewing awards shows for you. So, please forgive me for this not being my most shining work, and know that I’ll do better for the upcoming SAG Awards and the Oscars. 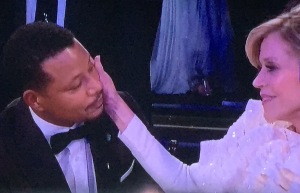 Who remembers a sad time when this picture of Terrence Howard and Jane Fonda would have been a scandal?! Photo by Karen Salkin.

[Note: I was going to repeat some of my tweets here, but it’s just too much work. And I hate repeating myself. I never did it on about four hundred episodes of my former TV show, Karen’s Restaurant Revue, so why start doing it now. You can always go to my Twitter page, @MajorCelebrity, and peruse them now. None are so interesting this time, but some are okay. My head just wasn’t in the game on this one, because the only person or film I was rooting for was Leonardo DiCaprio and The Revenant, and I didn’t expect anyone else to realize that it would be so unfair if anyone or other film won, so I was worried the whole time (because those two awards were at the very end.)] 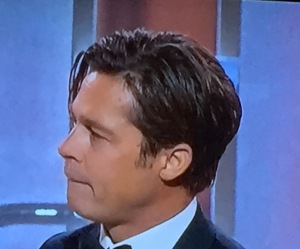 I love Ricky Gervais! Yet another perfect monologue from him!

Everyone has dirty, stringy, hanging hair, both sexes alike. Disgusting! What trend is coming next–hillbilly teeth?!

I hate JLo‘s canary yellow dress, that she kept trying to trick us into thinking was some wonderful shade of green.

I loved Ricky’s Ben Affleck joke. (That Matt Damon is the only person he hasn’t cheated on!) 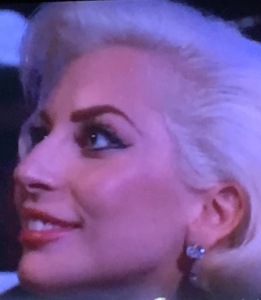 I think it’s time for Lady Gaga to get herself some braces, n’est pas? Photo by Karen Salkin.

Why did presenting team Bryce Dallas Howard and Orlando Bloom not even greet each other?

I never even heard of most of these TV shows!

Jon Hamm thinks he’s so funny, but he’s not.

Have you ever seen Lady Gaga and Bucky Beaver together? 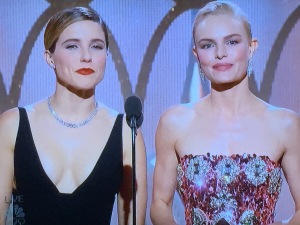 The ghostly duo of Sophia Bush and Kate Bosworth. Photo by Karen Salkin.

How nasal is Lady Gaga?

I am absolutely thrilled for the victories of Leonardo DiCaprio and The Revenant!!! Such deserving wins. (My very next column is the review of that film, my first of the season, so please be sure to read it. Clue: It’s the best movie of the year, and possibly the decade!)

I love Bryce Dallas Howard’s under-stated eye make-up. It looks great on her. 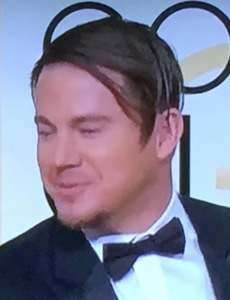 I hate to say it, because I’m a fan of hers, but Alicia Vikander‘s white candy-striper dress is awful.

Idiot Zendaya said that Harvey Weinstein “took to” her because she’s real. Guess what, honey? A “real” one wouldn’t make that statement!!! She elaborated, “He figured out that I was a real one.” She doesn’t even belong amongst this crowd at all! And she was at the front table! Proving once again that life is not fair.

What stylist talked all these peeps into going out with dirty hair?

I love Jacob Tremblay, the little boy from Room. I saw him in person at an event the day before, and he’s adorbs, not to mention extremely talented. 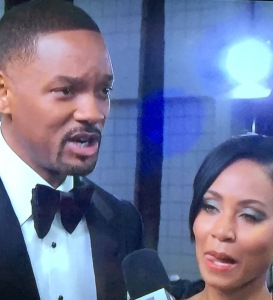 Doesn’t Jada Pinkett look bored while hubby Will Smith is speaking seriously? She looked even more so in action. Photo by Karen Salkin.

Rachel McAdams‘ flowered dress is hideous. It looks like pens I had when I was ten! They had fragrance I can still smell!

Speaking of Rachel, I wonder if she and former flame Ryan Gosling bumped into each other, and if so, what they said.

Leo was never one of my crushes, but I think that now he’s moved to the top of the list. I’m in love with him now, (but only professionally, so no worries Mr. X.)

Jada Pinkett could not look more bored as her husband, Will Smith, talked.

I love the few indigo dresses, like Kate Winslet‘s and Gina Rodriguez‘.

Kate Winslet is so classy.

I have no idea what this show is, nor who these people are, but their interviews are not that dreadful, actually. 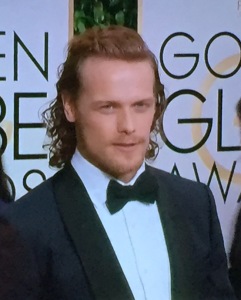 Who’s this gorgeous mystery man? If you know, please let us in on it in the Comments section below. Photo by Karen Salkin.

I wish Gina Rodriguez had not told us that she did not wear deodorant. Ugh. Between that bit of info, and everyone’s dirty hair, I may vomit. Seriously, I was really hungry before it all began, but I could not eat the whole time because of all the on-camera grime.

Does anybody know who this gorgeous Heath Ledger look-alike is?!

I don’t know who Olivia Palermo is, but I loooove her outfit! It may be my fave of the night! 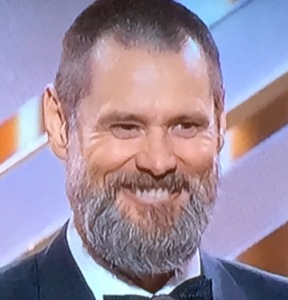 He was funny, but why would Jim Carrey choose to look like this??? Photo by Karen Salkin.

Matt Lauer always acts like he’s thinking of something profound to say, and then comes out with nothing special. Maybe if he stood up straight, his mind Would function better!

Eddie Redmayne is so genuine and darling.

Props to Sly Stallone‘s daughters for being some of the very few with clean hair!

And that’s all the snark (and kudo-ing, too) that I could muster this time. (Except for my tweets @MajorCelebrity, so please don’t forget to check those out when you get the chance.) I will post several movie reviews before the SAG Awards and Oscars, beginning with The Reverent this week.