My annual review of the Emmys arrivals and telecast will be shorter than usual. (I know—thank the Lord, right?) I live-tweeted many of opinions last night (which you can still read @MajorCelebrity,) so I’m just repeating them, and then giving you a few updates today.

Young Sarah Hyland in one of the few good outfits of the evening.

I had to interrupt my coverage of the Emmys Gifting suites to publish this, so please remember to continue reading about them, starting again tomorrow.

Okay, here goes with my thoughts on the Emmys:

I actually enjoyed these Emmys.  Maybe it was because it must have moved along, since it ended on time, or maybe live-tweeting made the time fly.

Whatever is was, I think that first-time host, Seth Myers, did an excellent job.  He didn’t try too hard, he didn’t make it about him, he had lots of funny moments, and he did it all with a twinkle in his eye, which I always appreciate.

As I said, I live-tweeted it, beginning with just some of the arrivals coverage.  Not even I could watch all three walk-in shows, so I switched around, and just could not get to it all before the live show show began.

Because it was an easy show, and the participants were basically well-behaved without many outside shenanigans, (like Ellen’s stupid pizza bit at this year’s Oscars,) there really wasn’t that much to complain about, so my tweets were not very amusing.

Who wears orange and black when it’s not Halloween??? Kerry Washington, apparently. And her make-up is a tad witchy, too. (And who gave her a blue purse? Fire that stylist!)

Sorry about that. But that’s what bland does.

No one’s outfit was even that bad, or that great, to warrant enough of my attention.  Or maybe I’m just exhausted from all the fabulous Gifting Suites leading up to the telecast.  (Speaking of which, reminder that it’s back to my coverage of those lounges tomorrow.)

And, as the evening went along, I realized that I didn’t care even one little whit about any winner!!! That was very a very strange feeling for uber-passionate, empathic moi.

So, in case you missed them, I’m going to just share the basic elements of my tweets (@MajorCelebrity) from last night, with a few other thoughts mixed in.

E!’s arrivals coverage was so nauseating that I had to move over to another channel! (I didn’t tweet this part, but I almost puked from Giuliani Rancic’s interview of Taylor Schilling. They just kept telling each how “gorgeous” and “insane” they looked, over and over. And Taylor said their jewelry should get married, or some stupidity like that. I was embarrassed for them both.)

The inane Sam Rubin (from local LA channel 5) just asked an OITNB actress to introduce herself! Shouldn’t he have studied-up on the people he would be interviewing???

Some teen girl who’s been on Mad Men since she was a kid, has the worst dress.  It looks like her belt is falling off!!!

If a woman is wearing a peplum, like Laura Prepon, it means she’s trying to hide a big stomach.

Are Anna Gunn and Allison Janney the same person?

Can someone please beg Jon Voight  to stop wearing that white schmata already?!

We just saw the beyond-foolish and embarrassing outfit on Lena Dunham.  Mr. X walked in the room, and yelled, “WTF???,” but with the real words.

From the back, she looks like the love child of Dame Edna and Bruce Vilanche. 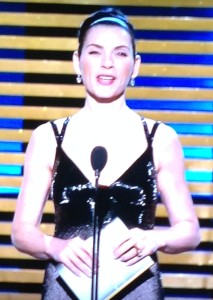 Julianna Marguilies looking like she’s about to wash her face and get into bed, not present an award! Photo by Karen Salkin.

Julianna Margulies looks like she’s about to wash her face and get into bed!!! Why in the world would she wear her hair like that!?!? And even Mr. X said her dress looked like a nightgown. Where are these people’s stylists?!

I can’t believe that Jon Voight actually just explained why he always wears that schmata scarf!

Ty Burrell‘s speech was very well thought-out, and so clever!

Jimmy Kimmel was just brilliant!  He was the highlight of the show!  He should host next year, if it’s on ABC.  [Note: The Emmys rotates channels each year, for fairness, and each network appoints one of their big comedy guys as the host.]

Love Jim Parsons! He deserved the win, and his speech was excellent.

That Julia Louis-Dreyfus bit of making-out with Bryan Cranston was hilarious.

It was a cruel joke to dress poor Mindy Kalling in this lumpy mess!

Who would dress Mindy Kalling in that monstrosity?!  They must hate her!

Kerry Washington‘s orange and black dress was like a nice Halloween witch costume!

Mr. X said of Weird Al Yankovic, “He found a look, and stuck with it!” And, in seriousness, I’m adding that he really hasn’t aged since I met him at least twenty years ago!

That was a great bit Sophia Vergara did with the guy who had to read the technical stuff. It was a highlight.

What a well-done tribute to Robin Williams tribute his good pal, Billy Crystal, did.

Good job by Debra Messing to have lost lots of weight since Smash. Big props to her!

Sorry these tweets aren’t funny, but I take this other actor critiquing seriously! I have to call them as I see them.

A FEW NON-TWEETED EXTRA THOUGHTS ON THE SHOW 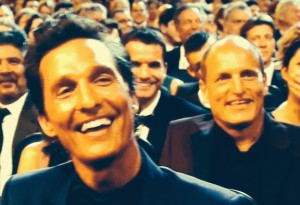 Can you see that Matthew and Woody look alike, despite the weird coloring of this pic? Photo by Karen Salkin.

Seth Myers sure has come a long way.

I can’t believe I forgot to tweet this one, but, did anyone else notice that Matthew McConaughey and Woody Harrelson look alike?! Only one is gorgoeus and the other far from it. I’m not saying which is which, but I’m just about positive that everyone, except for maybe Woody’s wife, can figure this one out! 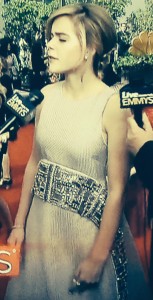 Doesn’t this Mad Men girl’s belt look like it’s falling off, rather than being that way on purpose? Photo by Karen Salkin.

Seeing Allison Williams makes me even angrier that she’s going to play Peter Pan on the live TV version this year. I’m probably the biggest Peter Pan in the world, (remember my birthday cake debacle? Scroll-down on this page for that story: itsnotaboutme.tv/news/holiday-happy-birthday-to-me-2013,) and I’m telling you, casting her was a travesty. It should be a really cute little boy-looking woman, who has great physicality, singing ability, and vulnerability. I’m dreading this version, even though I think Christopher Walken may be great.

Loved the mesh over Hayden Panettiere‘s chest. I mean it!

Ellen Burstyn hasn’t aged a day in the decade or so since I’ve heard of her.

That’s it for the Emmys. I hope it’s enough for this year. Please remember to check back here tomorrow for more great Gifting Suite stories!