I really don’t care much about the Emmys anymore since nowadays they feature hardly any shows that I watch, actors whom I have no idea who they are, and few that I care about even if I have heard of them! I have no one to root for. 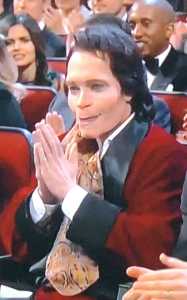 The weird mystery dude in the front row, about whom I did not tweeet, in case he was an unfortunate soul. (But it turned-out to be just make-up.) Photo by Karen Salkin, as is the big one of the massive Emmys arrivals at the top of this page.

But I still watch because I’ve been doing it my whole life. And, of course, I must review them for all of you!

Before I begin, I have to clear-up the biggest mystery of the night. (And no—it is not who that weirdo-looking character in the front row was!) For everyone who’s been asking me why it’s on a Monday this year, (as opposed to the usual Sunday airing,) the answer is one that even I did not know at first. I thought it might have something to do with the early Jewish holidays, or giving some of the guests a day in-between the gifting suites, or to give the celebs an extra night to recover from Saturday night’s fetes.

But none of that is the reason. Ready for it? The Emmys are on a Monday now so as to not clash with the early-season football games!!! (Perhaps the powers-that-be were around for that very old school Superbowl-Heidi debacle way back in the day, and it scarred them for life. And they are trying to make up for it now.)

Now that you finally know that answer, (you’re welcome, by the way,) let’s get to my sort-of brief reviews (because I live-tweeted many of my thoughts already. So maybe you should follow me on Twitter, if you don’t already. @MajorCelebrity.)

I was wondering why this show seemed like a weird version of Saturday Night Live, and then I realized that it was produced by Lorne Michaels. He featured way too many of his own cast members on the Emmys, some multiple times!!! Like the beyond-dreadful Fred Armisen and Maya Rudolph bits, which totally bombed.  Big-time! What a supreme waste of time those two were. 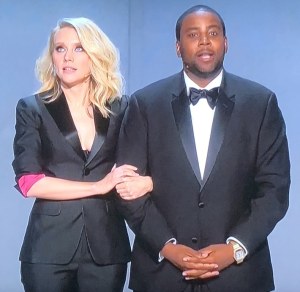 And even though I love him, I couldn’t figure-out why SNL’s Kenan Thompson was presenting the final award of the night, which the biggest star usually does. Making the Emmys basically a promo for his show, SNL, was not right of Lorne Michaels to do. And it weakened the Emmys. I’m so glad that a different network will produce the show next year.

I don’t think I’m down with the weird new format of the presenters showing-up only to announce the winners, rather than to first name the nominees. Yes, it probably does make the show move faster because there’s no tripping over names, (because none of them have heard of each other, either!,) but by the time they did their little “presenter patter,” I totally forgot the category and the nominees! 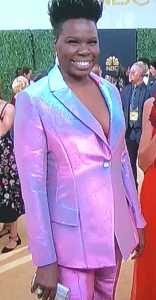 It was also a tad bizarre to see so many nominees in each category. It used to be five in each, dot, dash, end of story. With so many TV shows nowadays, (most of which I’ve never heard of,) it is nice to give so many actors a chance, but a nomination just seems not so exclusive anymore.

The on-air engagement of winner Glenn Weiss and his girlfriend was the best thing that’s ever happened on the Emmys!!! Even Mr. X was screaming along with me. (And, by the way, as Glenn was speaking of his recently-deceased mother in his acceptance speech, I said to Mr. X, “He’s going to propose to his girlfriend right now!” I even predicted that the rest of his sentence, “You wonder why I don’t like to call you my girlfriend,” would be, “Because I want to call you my wife!” I’m a genius at things like this.) 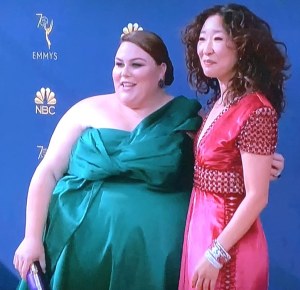 Chrissy Metz and Sandra Oh, looking like an opposite “10.” Photo by Karen Salkin.

And on a shallow note (like all these others aren’t???,) the Best Dressed women there were (in no particular order) Samira Wiley, Leslie Jones, Joey King, Taraji P. Henson, Issa Rae, Penelope Cruz, Keri Russell, and Zazie Beetz.

While the Worst Dressed were Tracee Ellis Ross, Chrissy Metz, and Sandra Oh. (Why would she want to feature a completely flat chest like that???) And no one loves bright colors more than I do, but I’m not a fan of Tiffany Hadish’s rainbow dress. (And with her pattern of repeating outfits until everyone begs her to stop, I’m sure we’ll have to see this one for another year! Ugh.) 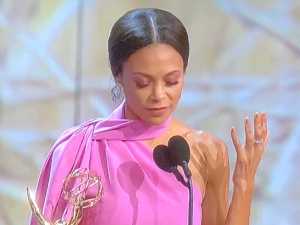 There were so many perfect parts this year! (Not roles in shows—hair parts!!!) So major props to especially Thandie Newton, Claire Foy, and Joseph Fiennes’ partner. 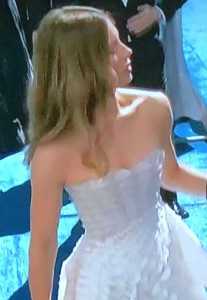 Why would Jessica Biel show her flat chest like this?! It just looks weird. Photo by Karen Salkin.

Why do idiot interviewers ask series regulars what’s happening on their shows?! How about watch it and find out!!! No one needs to know earlier than that.

Milo Ventimiglia was so nice; he listened to the high-foreheaded female host’s inane question, and gave a thoughtful essay answer!!! Wow.

Sterling K. Brown and his wife are always so nice.

I love that a kid from Stranger Things, Noah Schnapp, still goes to sleep away camp! And admitted it! Nice. 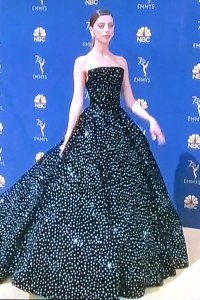 I have less than no idea who this woman is, but that is, by far, the most gorgeous gown there! Photo by Karen Salkin.

Colors seem to be the fashion of the day. And just white.

The gown on someone named Angela Sarafyan was stunning. But Mr. X said right away, “I hope she’s sitting on the aisle!”

Trevor Noah is adorable!!! I guess I’m the last to know.

When he told interviewer Jason Kennedy that he had watched his journey, Jason said, “You know I’m not Ryan Seacrest, right?” Very amusing and charming. I loved both these dudes! (And how rare is that for me?!)

Justin Timberlake was really listening to his wife when she gave a long answer about her career!!! (Maybe he should give the always ear-budded Mr. X some lessons.) 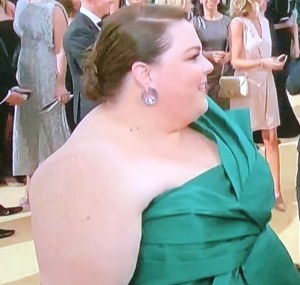 Why would Chrissy Metz have that arm sticking out like that??? If she has a stylist, I want his or her name so I never look that bad. That woman needs all the help she can get, and this was the opposite. (By the way, I’m not “fat-shaming.” I’m an equal-opportunity critic. I hate the stupid new rule that you can’t comment when heavy people look bad! You’re allowed to rag on the looks of normal-weight people only these days. What a crock!)

Mandy Moore said Reese Witherspoon is her idol. Of course she is—they both have the same lisp!!! 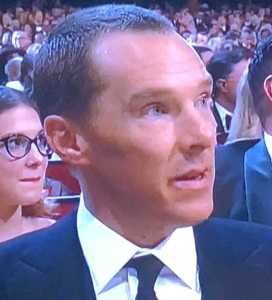 I have no idea who she is, but I now like Joey King and the guy she was with because they smiled right after a serious-faced photo. And her dress was great!

I love how much John Legend loves his wife, but Chrissy Teigen is really funny-looking. How did she become a model to begin with?  But they always seem really good together.

Benedict Cumberbatch looks so much better with his uber-short hair. He’s still funny-looking, but it’s definitely an improvement.

And what a nice, thoughtful, intelligent guy he is! 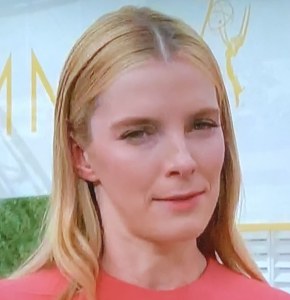 So, of course, that idiot woman interviewer dismissed Benedict for his serious talk. Shame.

I never saw Betty Gilpin before, nor heard of her, but she looks like a behind-the scenes person, not a nominee. Her make-up was almost non-existent, her roots were showing, and that dreadful no-color dress accentuated her centaur-looking body!

Jason and Zazie Beetz talked about how people mispronounce “Zazie,” and she said that her mother thought it would be really easy. But her parents should have spelled it the way she wanted it pronounced!!! You don’t spell it “Za-zie” if you want it pronounced “Cess-ie!!!”

Penelope Cruz is always so lovely. 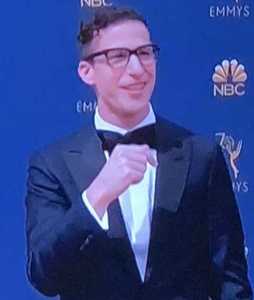 Can this really be Andy Samberg??? Photo by Karen Salkin.

These three woman hosts, who I believe are from the Today show, were the absolute worst interviewers. The could not rush everyone off any faster.

What has happened to Andy Samberg??? He looks like a little old man!

The wife of Chris Sullivan, of This Is Us fame, could not be further from his TV wife, Chrissy Metz. ’Nuff said on the subject.

The female hosts’ fawning over Sandra Oh’s Japanese parents was downright cringe-worthy. Savannah Guthrie said, “Oh they are gorgeous,” like she was talking about “special” children!!! Oysh.

Laura Dern is so lovely, intelligent, and not full-of-beans, as several others of these folks always are.

SOME IN-ORDER THOUGHTS ON THE SHOW 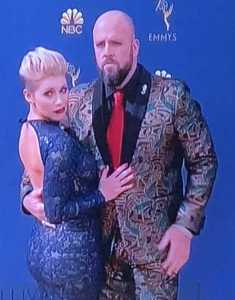 Chris Sullivan and his wife, the anti-Chrissy Metz. Photo by Karen Salkin.

What a great opening, both the funny song and the monolog of first-time hosts, Colin Jost and Michael Che!

But after the very first “bit” was about how “diverse” this Emmys is, with so many black nominees, only two won! So the opening just made it more obvious as the night went on.

And, on a semi-side note, I was just chatting with RuPaul on Saturday, and he did not have the bad skin, at all, that was showing on this stage. That’s a whole lot of break-out to have occurred in just two days! I didn’t know that was even possible. 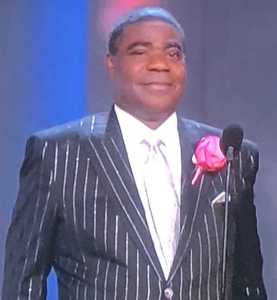 Emilia Clarke is so adorable.

I give Millie Bobby Brown credit first for wearing glasses, and then not apologizing about it, as others have done.

That horrible old-fashioned riding outfit is what Amy Sherman-Palladino showed-up in… as a nominee???

But what a fun reference she made about her husband: “You are the Sid to my Nancy, mister!” Scary, in a funny way. (But I’m sure that only about three of us even got it!)

I like Angela Bassett, but that was so classless of her to not know how to pronounce winner Rachel Brosnahan’s name. 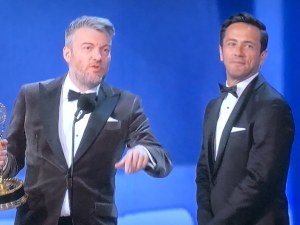 I guess big earrings are back, but, even though I love them with my two thousand pounds of locks, they didn’t really look good on anyone on this show. They were all swinging too much as the women spoke.

Aidy Bryant (another SNL-er, of course) and Bob Odenkirk were the funniest presenting duo.

The best speech of the night was from William Bridges and Charlie Brooker, the writers of Black Mirror: USS Callister, (which I don’t think is a comedy show.) They were funny and charming, and William is adorable-looking. Charlie made me laugh when he was just walking up to the stage! 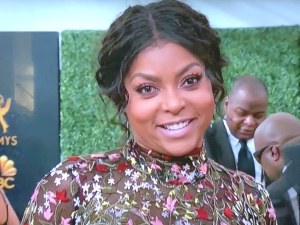 Who are those two miskites, Ilana Glazer and Abbi Jacobson??? I have never heard their names or laid eyes on them.

And how is John Mulaney considered funny? Ever.

Taraji P. Henson looks great. She just may be the best dressed one there, period.

Who are those Queer Eye fools to tell anyone how to look?! Three out of the five looked like total buffoons. 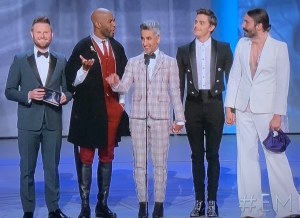 Anthony Anderson is so rude—he didn’t applaud even one second for The Marvelous Mrs. Maisel when they beat-out his show Black-ish for the Outstanding Comedy Series award. What terrible sportsmanship. 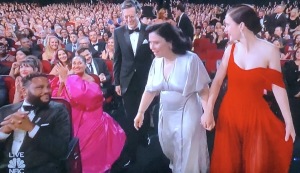 Anthony Anderson on the bottom left, not even pretending to applaud for the show that beat his. So rude!!! Photo by Karen Salkin.

Best news of the night—the show didn’t go long for once! Good on them!

[Note: All my Emmys suites’ coverage will begin on Thursday, and continue next week. There will not be a new column tomorrow because it’s Yom Kippur.  If that’s your holiday, I wish you an easy fast. The one good thing about my mini-stroke almost three years ago is that it got me out of fasting, in perpetuity! (I say that last part just to remind you that I’m shallow!)]