To celebrate “Welcome Home Shirley Temple” month in Santa Monica, (so designated because she was born there,) the local Santa Monica History Museum is showing the exhibit, Love, Shirley Temple for the next five days. If you’re anywhere near Los Angeles this week, and care anything about history, old films, and/or the one-and-only Shirley Temple, you have got to make this museum a destination! 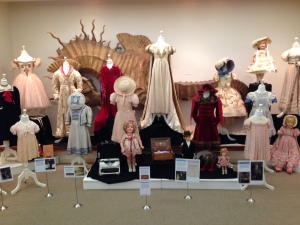 Just a part of the collection! Photo by Karen Salkin.

Please don’t miss this absolutely unique exhibit. (I’m even going back to see it again!) After it’s time there, there will be stops at four other museums around the country, before the entire collection is auctioned off, (on my half birthday, July 14!) And then you’ll never have this unique opportunity again!!!

Who in America doesn’t love Shirley Temple?! The answer is—no one! I even had a doll of her when I was a kid. (But it was an antique one, so I couldn’t really play with it. I almost fainted when I found it among my precious possessions in my childhood home last year!) 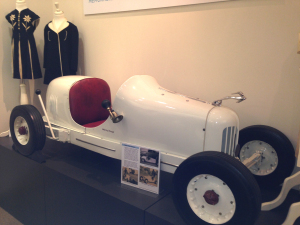 The car from Bojangles! Photo by Karen Salkin.

But this personal collection of Shirley’s, courtesy of the Temple Black family, puts my lone doll to shame! It features many of Shirley’s costumes, dolls, movie stills, and just about anything else you can imagine. And many things you can’t, as well!!! My eyes just about popped out of my head when I spied the adorable little car that Shirley’s four-time co-star, Bill “Bojangles” Robinson, had specially made for her. She drove it around the lot, and it even had its own parking space! (More on the actual exhibit in a minute.) 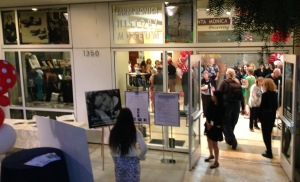 The party, from the outiside. Photo by Karen Salkin.

My pal, Flo, and I got to view it all this week at the opening party, which was a lovely event, from start to finish. There were so many components to it.

First, the guests got to mingle while snacking on delicious hors d’oeuvres catered by the near-by Fairmont Hotel. (I’m an idiot who didn’t realize they were serving Shirley Temples as the non-alcoholic beverage! What a cute idea! Had I not thought the glasses all contained wine, which I don’t drink, I would have tried one, for sure.) There was also a popcorn machine handy all night, which was a clever touch. 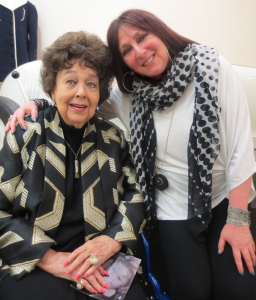 During that time, I was invited into a private room to interview Jane Withers, who’s been famous since she was three!!! She was adorable, and even moved my way-too-long bangs from my eyes, just as my mother used to do! (She told me she always wore bangs back in the day, so she knows how it is.) That one small gesture gave me a warm feeling from the start.

I loved her! She laughed at everything I said, and told me emphatically, “You’re nifty!!!” That was enough for me—I didn’t even need to sample the food after that high! (But, of course, I did!)

We discussed our manicures, our love for Shirley Temple, (who was her childhood friend and colleague,) and our mutual non-fanhood of child actors today. When I inquired about that topic, Jane said she just doesn’t really choose to watch them, while I said that I feel most of them are obnoxious. Guess Ms. Withers is classier than I! (Duh.) 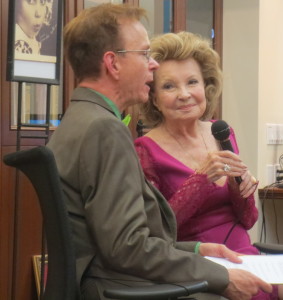 Cora Sue Collins, with an interviewer. Photo by Flo Selfman.

The fete welcomed several notables from that era, including Margaret O’Brien, Marilyn Granas, (who was Shirley’s stand-in,) and Cora Sue Collins, a child star with Shirley, who’s still rocking that movie star persona (in sexpot dress and heels!,) at an incredible eighty-eight! I might just have a new idol!

After a bit of mingling, we were treated to an hour or so of speakers and proclamations. It was fascinating as a whole, and anyone with an appreciation of history and/or movies would have enjoyed it. Louise Gabriel, the President of the Santa Monica History Museum, (and a noted doll collector,) was front and center for awhile, and loving it all. Stuart Holbrook, of Theriault’s auction house, gave us a lot of background on the exhibit. When he was done, Flo gushed, “That man is an impressive speaker!” 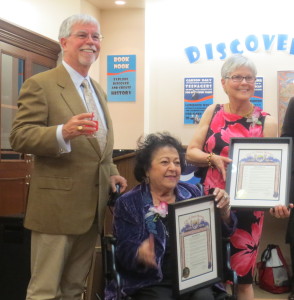 Mention was made of how smart Shirley’s mother, Gertrude, was, to have saved all of her costumes, famous people’s autographs, etc. That’s the opposite of my little mo, who, (not out of meanness, but just to get rid of stuff,) threw-out all my “treasures” the second I wasn’t looking. (Maybe that’s why I save everything now, much to Mr. X’s chagrin.)

The above-mentioned Cora Sue Collins was the final speaker of the evening’s presentation. We enjoyed her many stories, especially the ones about working with Greta Garbo as a child. Flo declared, “What a charmer.”

Two of Shirley Temple Black’s children were in attendance, and I got to speak with her daughter, Susan Black Falaschi, (who has the most gorgeous skin,) for awhile. She said that she, like me, (and I’m sure so many others,) couldn’t put together that the precious little dancing movie star was her mom. (I still can’t reconcile the youngster with the public servant grown-up!) 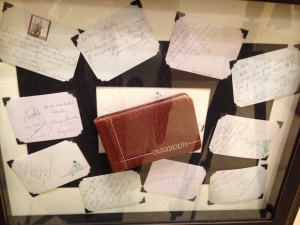 Some of the very famous autographs. Photo by Karen Salkin.

After that, Flo and I finally got a chance to peruse the incredible, beautifully- displayed exhibit. Flo noted that it was “such a treat” to see all of Shirley Temple’s personal memorabilia “under one roof.”

The high point for us was “spotting the autographs from Eleanor Roosevelt and Franklin D. Roosevelt in a display case.” I’m so glad she pointed those out to me! I had been concentrating on just the plethora of movie costumes; it was so interesting to see them get bigger as Shirley grew! 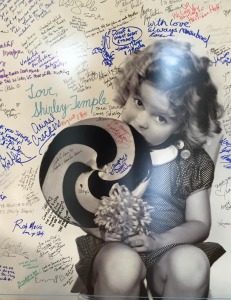 The poster we all signed. See if you can spot my signature! Clue: It’s near the top. Photo by Fabian Lewkowicz.

As we all left, we were asked to sign a giant cardboard poster of the event, and then given a cookie with young Shirley’s face on it. You know I’m never eating mine!!!

As Flo observed on the way out, “The evening was over all too soon!” Just make sure this exhibit isn’t over for you before it’s too late!