Recently, my friend from New York, Lauren, and I took a quick overnight trip to Vegas. (Without gambling even once!)

If you missed Friday’s story of where we stayed there, the beautiful condominium building, One Queensridge Place, you can read about it here: itsnotaboutme.tv/news/vegastravel-vegas-trip-part-i-one-queensridge-place.

Now we get to what I’m always the most interested in—a restaurant review!

(The juicy story about our actual time on the road will be published tomorrow, so please don’t miss that one.) 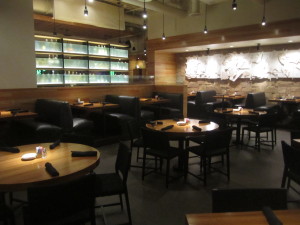 One of Cantina Laredo’s interior spaces. Photo by Karen Salkin.

We had just that one night in town, so of course, I always want to know where locals would recommend to eat. My friend Lori is not only a local for the past decade or so, but she also lived in L.A. for a very long time, and worked in Beverly Hills, where we used to go to lunch together often. So she’s someone whose opinion I really respect when it comes to restaurants. She and her boyfriend, Rob, said that one of their very favorite restaurants in Vegas is Cantina Laredo, so that’s where the four of us went.

It turned out to be right down the block from One Queensridge Place, in the tony Tivoli Gardens outdoor shopping center. It’s sort of a smaller, classier version of L.A.’s Grove, but with free, easy parking, no less!!! 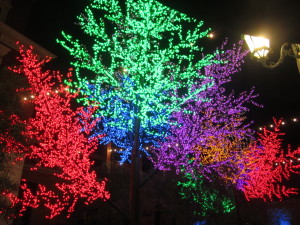 The beautiful tree lights on the patio. Photo by Karen Salkin.

This was such an upbeat dinner at what Lori tells me is a trendy eatery.  I enjoyed the perfect low-key lighting, and a highlight in that category for me was the brightly-colored lights on the trees that are on the popular patio.  I’m sure the patrons appreciate that they have such a variety of areas to sit in, and the bar looked very happening, too.  I’m so glad that there was such a fun, hip restaurant so close to One Queensridge Place.  It made our stay there even more buttery.

You know that when I visit a new eatery, I have to try as many dishes as possible, so thank goodness Rob came to the rescue in that arena. Lori eats like a bird, (hence, that’s why she has the greatest body I’ve ever seen,) and Lauren and I were way past hungry at that point, (read my story of our harrowing road trip there tomorrow,) so the three of us ladies just took bites and then foisted our leftovers on Rob. Good thing he’s a manly man and could take it!

Speaking of men, we were treated well by new manager, Matthew, (who had been there only three weeks, at the time; it will only get easier for him after cutting his teeth on our party!,) and informative server Eric, also known as Leche, (leaving me to crave milk for the entire meal.)

We were far from a party of drinkers, but Lauren insisted we try at least one alcoholic beverage to tell you about because their drink menu was so inviting. Cantina Laredo features more margaritas than I have ever seen in one place before, so, even though it was a tough choice, we finally settled on the Mango Pepper Rita, which is made with blood orange liqueur. As I said, Lauren was the only one who had a few sips, and she said it was quite delicious, while we were all in agreement that it looked quite festive! 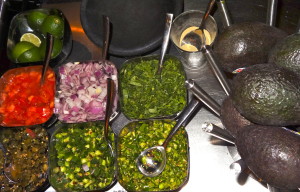 As recommended by everyone we had met that day, we began with their signature guacamole, which they mix up fresh for you, table-side. Not only was it delicious, but it was perfect for our group because I didn’t want spicy peppers in it and Rob did, and Lauren shuns onions and I need them. So, after Eric mixed the basics, he gave us each a little dish of the extras we wanted, so the whole group was satisfied. As Lori put it, they “accommodated our individual tastes,” while I was saying that they “accommodated our nuttiness.” I think she said it better, don’t you? Rob declared it to be “awesome and super-delish,” while Lauren chimed-in with “creative.”

I’m really a wimp, so outside of the specially-mixed guacamole, everything, including the basic cilantro-lime rice, (that the other three described as “zesty and tangy,”) was too spicy for me. I should have thought of ordering my chicken dish with no spice to begin with, but Matthew was kind enough to have it re-made sans sauce, and it was perfect.

So, here are the rest of the highlights of our meal, in the order that we ate them: 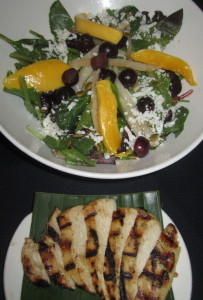 The mango and chicken salad, with the chicken on the side, the way we ordered it. Photo by Karen Salkin.

Rob said the ceviche was “great, tangy, and robust,” and Lauren added that it had a “hearty flavor.”  All four of us loved the Ensalada De Mango Y Pollo, which is salad with mango and chicken.  Lori’s a vegetarian, so we had the chicken on the side, which I can tell you was grilled just right.  Rob put it at “the top of the list,” and lauded the honey vinaigrette for it’s “subtle taste.”  He and I also enjoyed the “perfect amount of sweetness” of the tropical dressing on the Ensalada De Camaron Con Miel, along with the “fresh slices of mango.”  (The shrimp on it was a tad too “smoky” for the three of us who tried it, though.)

Lori loved her vegetarian Enchiladas De Avocado, which carnivorous Rob even deemed “hearty.” It’s one of their favorite dishes at Cantina Laredo.

For the true spice lovers out there, (like Rob,) there was the slow-roasted brisket Tacos De Barbacoa. Rob appreciated the “authentic Mexican flavors and aromas.” 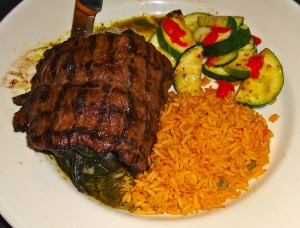 Lauren, who was a bit too tired from our road trip to Vegas to eat much, enjoyed her grilled steak special, which is one of their signature dishes. She kept encouraging me to try it because the steak was “so tender,” but I had just started on my specially-made sauce-less Camarones Escondidos, and didn’t want to change tastes.

This is the story on that chicken dish: it normally comes with a chipotle-wine sauce, which, as I mentioned before, was too spicy for me. So I asked Rob to eat it, because I can’t bear to waste food, and he said it was “very tasty,” and he really liked the “good, smoky flavor.” 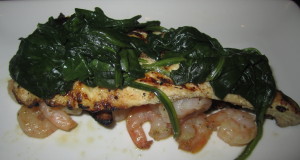 The shrimp-stuffed chicken breast, minus the sauce and rice. Look at its simple beauty. Photo by Karen Salkin.

Then I got to try the new one they made me, minus the sauce, and I absolutely loved it! It was a combination of ingredients I never would have thought of, and they worked perfectly together. What it is is a grilled chicken breast that’s stuffed with the tastiest baby shrimp ever, and topped with sautéed spinach. Much healthier than that you cannot get, especially in such a flavorful dish.

We were finally ready for the desserts which were prepared table-side, a presentation we all enjoyed.

Shockingly, I sat them out because I couldn’t eat another morsel at that point, so it was mainly Rob trying three of the four. The funny thing was that Lauren rarely eats desserts, and Lori tastes sweets even less than that, but they both took bites, and loved what they tried! 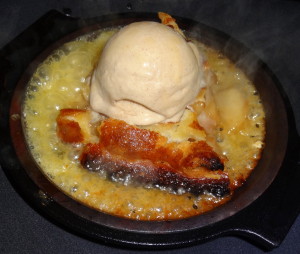 The consensus favorite was the Mexican apple pie, which was truly sizzled in Mexican brandy butter, and topped with cinnamon ice cream. It did look luscious. Lori said it’s “unique,” and “not to be missed.”

They moved on to the Mexican brownie, which was also served on a sizzling skillet with the Mexican brandy butter and vanilla ice cream this time. Lauren loved it and said it was “great,” while Lori piped-up that it was “moist and nutty,” and then added, “And who doesn’t like moist and nutty?” She might have a point there.

Cantina Laredo’s Tres Leches cake, which is just about mandatory in Mexican restaurants nowadays, had a fun twist; it came with a mango cream sauce. Lauren said it “looked cool on the plate,” and she positively swooned over the strawberry that was served on top of it, declaring it “divine.”

We were having such a good time that we practically closed down the place. With Cinco de Mayo coming up in a little over a month, I just may feel another visit to Cantina Laredo coming on, even if I do have to endure another road trip to Vegas to do so!