Trending
You are at:Home»Uncategorized»UPDATE: TWO MONTHS SINCE I’VE SEEN CLARENCE
By Karen Salkin on September 30, 2010 · Uncategorized

[Note: I’m not printing this column to be maudlin and throw a pity party for myself. Rather, I want other people in this same boat, (and strangely, a lot of friends and acquaintances have lost their pets recently,) to realize that they’re not alone in what they’re feeling.]
Today is two months since we lost our precious boy, Clarence. And, sad to say, so far it just does not get easier. To make it worse, he would have turned eighteen this past Sunday. (Which means that we were lucky for a very long time, but also, we have more to miss.) 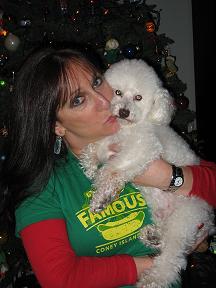 When friends lose someone, I always try to tell them that life will go on, and that they’ll be happy again. But at this point, I’m having trouble believing that myself.

And, ugh to the idiots who tell us to get another dog. Would someone get another child if they, God forbid, lost their teen-age son? I think not. I’ve seen that tragedy happen to people, unfortunately, and sadly, they never get over the loss. I’m afraid that’s what’s happening to us.

Going to bed is the worst time for me. Clarence and I shared a pillow. Mr. X and I have plenty of them, and Clar even had his own. But, just like the adorable best friend he was (and continues to be,) he always chose to sleep with me. It’s a chiropractic pillow and therefore has a grove in the middle. Every night, after he begged for, and received, his dog treats, he climbed on the pillow, kissed me twice, then turned around, we both sighed, and spooned the night away. It’s really difficult to sleep without him.

And I’m so nuts that I keep filling his water bowl still. Mr. X is a witness to what I’m about to tell you, so I didn’t imagine it: in the first couple of days after Clarence passed, the water went down too much and too quickly for it to have been evaporation, or any other scientific phenomena. I do believe that spirits stay here for a while, and it really helped to know that he was giving us a signal. (And wasn’t thirsty!)

All that being said, we have had some moments of laughter in our lives. It’s always easier for me when I’m out of the house because I would be without Clarence then anyway. And I’m grateful that we had already ended our long run of being co-stars on my show because there’s no way I would have been able to continue it without him. (Nor would most people have tuned-in anymore!)

And I’m beginning to feel that I’m back experiencing life. For most of the past two months, I felt that I was floating above life and not really in it. I still cry every day and night, but not as often or as much.

There’s really nothing more to say. I just wanted to acknowledge this day, and hope that Clarence is doing great “at college,” as I call it since he was the right age. I like to picture him at the ivied walls of Brown. You go, boy!