Trending
You are at:Home»PARTIES»UPCOMING/THEATRE/PARTY: “BANG BANG” MEET AND GREET AT PALERMO
By Karen Salkin on March 30, 2015 · PARTIES, THEATRE, UPCOMING

Years ago, friends were having their wedding on New Year’s Eve. Since it would be a tad weird to spend that ultimate party night with a bunch of strangers, (because most people at weddings come from different areas of the bride and groom’s lives,) the couple did something brilliant. They had a much smaller soiree a couple of nights before the nuptials, for their main younger pals, so that we would all know each other a bit. That way, everyone would be comfortable when we saw each other at the wedding two nights later. What a great idea!

And now I’ve noticed a similar growing trend in the world of L.A.’s smaller theatre projects. And it’s a smart one. (To give credit where it’s due, I’m pretty sure it was started by wonderful PR chick, Lynn Tejada of Green Galactic.) 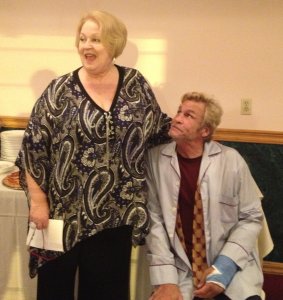 To that end, playwright Michael Kearns, whose play Bang Bang (not to be confused with the songs by Cher and Jessie J) has its World Premiere in a couple of weeks, had a “meet and greet” fete at Palermo in Los Feliz last week. Not only is that excellent publicity for his project, but it introduced many of us first-nighters to each other, which will make for a more festive opening night! Fun move on his part.

The venue was perfect; it had a real party feel to it. (More on the place in a minute.) I was happy to meet Michael and discuss a bit of life with him. Turns-out, we have several pals and experiences in common.

After we all mingled and ate for a bit, Michael addressed the intimate assemblage, speaking on his career, his reasons for writing this play, and his thoughts on the struggle of Los Angeles actors to keep 99-seat theatres alive, a topic many of us were very interested in.

I hate anything to do with guns, so, because of the title, I was ignoring this show at first. But when I took time to look beyond the moniker, I discovered this is an anti-gun piece. I could not preview his new work any better than the press release, so this is what it states: “In the wake of tragic events that stunned the nation, from Sandy Hook to Ferguson, Bang Bang takes a timely look through the dark lens of our obsession with violence. Michael Kearns’ compelling new theatre work explores an angry America with sensitivity, dark humor, and pathos for a cathartic experience that is surprisingly positive. The new play weaves a battered, shredded tapestry from individual lives torn apart when a trigger is pulled.”

The play will be at the Highways Performance Space in Santa Monica for six performances, beginning April 10. I’m planning on reviewing it, so please keep an eye out for that. (For now, you can learn more about the play here: highwaysperformance.org.) 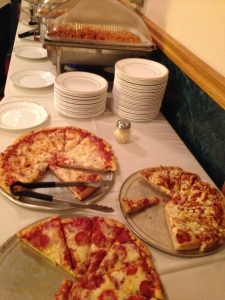 Part of the yummy buffet. Photo by Karen Salkin.

Now I have got to tell you about Palermo, which has been around for forty years!!!

First of all, I loved going to Los Feliz. It’s such a fascinating area that I rarely have cause, nor time, to explore. Just even driving along Vermont Ave. was fun!

Between the really fun buffet and cool atmosphere, Palermo made me feel like I was back in Brooklyn, (which is a great thing!) The upstairs Banquet Room, which is a bit detached from the rest of the eatery, is so Brooklyn, in due, partly, to the murals, the Xmas lights, and even the annoying tinny background music.  I seriously thought I was in Bay Ridge!  I was shocked, when we exited, to see I was still in LA!

The buffet that Michael and company chose was the perfect basic Italian fare. Palermo’s pizza is on thick bread, sort-of a combo between regular and deep dish. There were three varieties; our fave was the Pizzarosa, which is a cheese-lover’s dream, featuring feta, mozzarella, parmigiana, and fresh tomatoes. OMG!

They also served a penne bolognese and a vegetarian one, crispy garlic bread, and a salad that complemented the heartier food perfectly. (They didn’t serve dessert so my pal and I went into the main restaurant after to get some cannoli to go. And let me tell you, this time I didn’t think I was in Bay Ridge—I thought I was in Little Italy!!! Yu-um!) 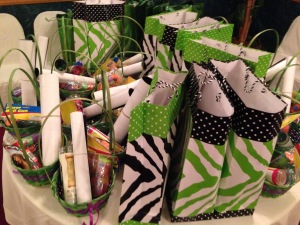 And they did the smartest thing at the end of the evening; its something that I’ve seen done only at my own soirees! The company was so generous in the food ordering that there was a lot leftover. So, our lovely server, Miguel, brought out to-go containers!!! I think most of the guests took full advantage of that consideration. It was so appreciated.

On the way out, we each received a goodie bag that contained, among other things, little toy water guns, to go along with the theme of Bang Bang. Very clever touch. That’s the only kind of firearm of which I can approve!