I spent this Halloween in New York, and during the day, I attended an annoying supposed seance in an eatery that was had been Harry Houdini’s childhood abode.  As the event droned on, (and on,) I found myself comparing it (unfavorably, I’m afraid,) with LA’s charming and entertaining holiday presentation Millennium Magic, which is filled with real magic! (Is that an oxymoron?) 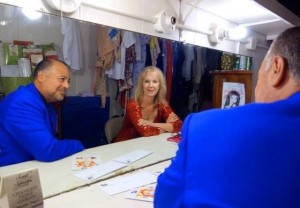 Well, lucky me, because when I got back to town last week, I found-out that this annual show is happening again this very week-end! Yay!

It’s held at Theatre West in the Valley, as a fund-raiser for that esteemed acting company. The producers are Jeanine Anderson and George Tovar, both talented magicians themselves. (Jeanine’s actually one of the very few female magicians I’ve ever seen! You go, girl!) Those two will entertain us at all three performances of Millennium Magic, which will be a treat for all of us who attend. 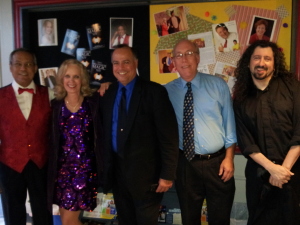 A previous Millenium Magic line-up. The guy on the right, Andrew Goldenhersh, is a riot!

But part of the three-performance fun is that the line-up (outside of that duo) is different each night! (Or day, in the case of Sunday.) And they are all professional magicians from the Magic Castle, so, if you’ve been wanting to get into that private club to watch pros like these, Millennium Magic is your chance to see the performers much more easily. (And much, much, much less expensively, as well. This show is a steal!)

Even though it’s all magic, there are all different types of it in this trio of presentations. But, much to the delight of all the audiences I’ve been in for the past few years, many of the magicians are humorous. What a perfect opportunity to be amused and amazed! (You’ll get the full magician experience if you see all three line-ups.)

Here is the schedule of performers, (in addition to Jeanine and George who do all three shows, of course,) but please keep in mind that, as with all theatre, it’s subject to change: 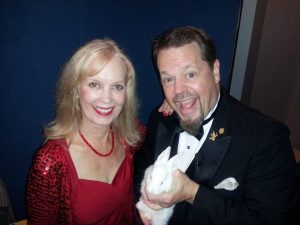 I’m not familiar with any of them, so I’m looking forward to making some magical discoveries this week-end. (See what I did there?) I hope that you’ll join me. [*I’m most curious to see this guy. Christopher’s hands were featured in The Addams Family films, as–what else?–Thing! Now I’ll have to sit up close to see if I recognize them!]

And, as always with Theatre West, a fabulous perk is the free parking right across the street! That is truly magic!