Trending
You are at:Home»UPCOMING»UPCOMING EVENT: MEMORY 5D+ PREVIEW
By Karen Salkin on May 16, 2017 · UPCOMING

I am such a fan of real talent. So I absolutely can’t wait to see the World Premiere of what I expect to be a wonderful show from China this month.  You know that I rarely tell you about something that I haven’t seen yet, but I recently got a small preview of some of the music from Memory 5D+, so I’m confident that we’re all in for a treat on May 26th and 27th. 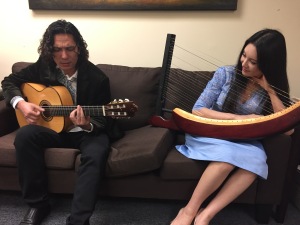 I had the privilege of meeting, and chatting with, two of the extremely talented musicians who are in the show, along with the producer and the writer of this international production.  Even with the language barrier, we had tons of fun and lots of laughs.  (I’m sure part of that mirth was due to the Chinese language I was trying to speak, which I had taught myself just that morning!) But the best part of that afternoon was hearing Lucina Yue (on the Chinese harp) and Erkin Abdulla (on guitar) play their instruments.  How lucky am I to have received such a private concert?! (By the way—I knew right away that Lucina plays harp before she even showed it to me, because of her elegant hands! Harp music fits her perfectly!) 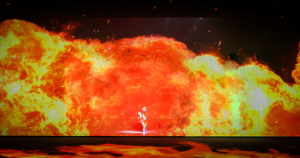 Zhou Siyao, through the visual effect. Photo by John Hughes.

To whet all of our appetites, this is how the show is described: “A once in a lifetime encounter with seventeen of China’s most celebrated national treasures: singers and musicians performing on rare traditional instruments seldom heard outside of China, paired with the latest story-telling technology.”

And with the rest of the cast of dancers and acrobats filling-out the evening, there are forty-three performers in all.  Yes, this, ladies and gentlemen, will be quite the extravaganza as only the Chinese know how!  (Speaking of “memory,” I can still conjure up that amazing opening ceremony of the Beijing Olympics, and that was nine years ago!) 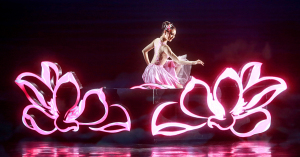 Zhou Lijun. Photo courtesy of Memory 5D+, as is the big one of Zhang
Yixiang and Zhou Lijun at the top of this page.

I understand that there’s an actual story that will be portrayed in Memory 5D+, written by John Hughes, the screenwriter of the upcoming film, Vivisection. He’s one of the people I spoke with in my private interview session, and I learned that he designed the visual effects for many popular movies including Frozen, Big Hero 6, Moana, Kung Fu Panda 2, Spider-Man 3, and Harry Potter and the Prisoner of Azkaban. And the backdrops were created by Tom E. Marzullo, whose list of the artists he designed tours for is a Who’s Who of the music world. So I’m confident that this show will look spectacular!

The whole of Memory 5D+ was created by Ulan Xuerong, whom I also interviewed that day. I don’t understand how one mind can come up with all of this artistry! Ulan should go on To Tell The Truth because I doubt that anyone would be able to guess that this sweet, unassuming, fashionable woman is the mastermind behind this supreme spectacle!

The story that we’ll see in this show is about how the forces of yin and yang in the creation of the universe learned to become one. (I’m glad I’ll finally discover that myself, because I can never figure it out! I think that most people don’t even know what “yin and yang” really are to begin with, and continually invoke them incorrectly. I can’t wait to share that lesson in my review of the show! Once I learn it myself, of course.)

Some of the instruments in Memory 5D+ are so interesting that I have to preview them for you. Several of them are rare traditional ones that we’re rarely lucky enough to hear in this country, such as the guqin (Chinese zither,) cowboy flute, gijak, guzheng, konghou (Chinese harp,) morin khuur (Mongolian horsehead fiddle,) pipa (Chinese lute,) Tuva drum (Shamanic drum,) and Topshur and Yekele, which are chordophones. (I don’t even know that English word!!!) 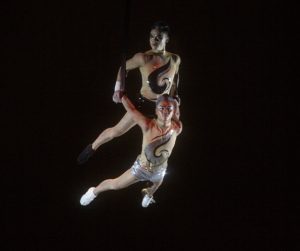 There will also be many visual arts featured in the show, including acrobatics and shadow play. But you’ll never in the gazillion years of the Mongolian Empire guess what I’m looking the most forward to. Ready? The Tuvan throat singing! I’ve witnessed it a time or two on television, but have never experienced it in person. I seriously can’t wait!!!

So, if you’re in or near Los Angeles on the two nights of the run, (which I expect to be magical,) do not miss this show! What better way to kick-off Memorial Day week-end than by making special memories for life?!