For those of you who are staying in Los Angeles, (or visiting it,) this Thanksgiving week-end, and are looking for something fun and festive to do while you can get around town with very little traffic, I have just the thing. It’s cultural, and holiday-themed, too, so it covers a lot of people’s tastes. And, of course, I’m planning on attending it myself! 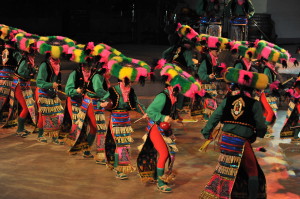 It’s the Saturday-night-only production of Navidad En Mexico, from the Grandeza Mexicana Folk Ballet Company, at the Redondo Beach Performing Arts Center, (which is really much closer to basic LA than many people think.)

You know that I very rarely just post a press release, (which is the lazy journalist’s way of doing things,) but since I haven’t yet seen the show, I obviously have no true impressions of my own of it to share with you. So, here’s the official word on this production:

“This spectacular folk dance holiday concert is a dynamic interpretation of traditional Latino cultural and religious events which highlight the holiday season in Mexico. Uniting Mexican folklore and heritage with the grander themes of religion and spirituality, Grandeza has created a colorful performance that will delight audiences of all ages.

This colorful show includes three dramatic/comedic choreographies by founder Jose Vences, each capturing a different aspect of the Mexican holiday spirit.  The first piece, Guadalupe-La Virgen Indigena, The Mother of all Mexico, illustrates the sixteenth century icon of the Virgin Mary’s apparition, forever changing the fabric of Mexican society, and becoming a celebrated icon of Mexican culture. The second act focuses on the light-hearted Pastorela, a mischievous reenactment of an Italian folk story. This much-loved Mexican Christmas tradition is still performed in towns and villages across Mexico.  Pastorela mixes religious teachings with indigenous folklore and ribald comedy to tell the eternal story of good versus evil, with a unique Mexican flare. Concluding with Navidad, the jovial dance celebrates Los Posadas, or nine days of festivities in preparation for Christmas.

Appealing to all of the senses, Navidad En Mexico visually delights the eye. The Lestor Horton Award-nominated costume designer, Elias Roldan created stunning costumes especially for these performances, incorporating the colorful traditions of Mexican folklore and dance. Explore the melodic sounds of traditional holiday songs provided by an accomplished choir featuring twenty choral members from downtown Los Angeles’ Cathedral of Our Lady of Angels. Join Grandeza Mexican Folk Ballet Company as they celebrate the heritage of the Mexican holiday spirit.”

[Note: Okay, I couldn’t help myself, and I had to correct several errors in the above three paragraphs, but I think you get the drift of what the show is about. But the credit, or blame, for the actually writing does not go to me on this one!]

I think that pretty much says it all. All I can add is, “Hasta la vista!,” to those of you who will be joining me in the holiday-entertainment-needing audience!