I’m in shock.  My funny, funny friend, Taylor Negron, has passed away.  From cancer.  I hadn’t even known he was sick! 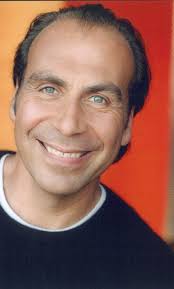 This is how I always think of Taylor.

I’ve been trying to pull myself together long enough to write this tribute, but I’m miserable about losing Taylor.  When I saw his name in a headline on the internet on Saturday night, my first thought was happily, “What series did he just get?”  And then, in the blink of an eye, my happiness turned to gut-wrenching sorrow when I saw what the story was really about.

Even though we had not been in constant touch anymore for the past few years, (a circumstance I now bitterly regret; I never expected a world where Taylor wasn’t just a phone call away,) he was someone I always considered a dear, and basic, friend.  I had known him longer than I’ve been with Mr. X! And that’s a very long time.

Please forgive me if this is the longest tribute I’ve ever written, but Taylor and I have so much history, and I have so many funny stories of his, that I just must share a few.  (The stories would be much funnier on video, but I’m too busted-up right now to shoot one.  I’ll try to do so down the line.) (I’m also sorry that this is far from my finest writing, but for once, this really is not about me.) (I know the stories about Taylor and me, but that’s what makes them unique.)

Before I was even in show biz, when I was a young girl who had just arrived in LA, my pals and I used to go to The Comedy Store to see their improv troupe. It featured Robin Williams, who was already famous. Taylor was a member, as well, and he’s the one who caught my eye from the start. I actually had a crush on his wardrobe, which he got such a kick out of when we became friends a few years later.

He and I eventually met at a party for Robin, and when I saw Taylor standing behind me in the buffet line, I did some comic bit to my friend about the chicken wings, knowing he would hear it. All of a sudden, he turned to his own friends and said, “Oh my God, that girl is still talking about the chicken wings!” So I turned to him and explained that I was just doing a bit, we laughed, and went our separate ways.

The next time I saw him was about three years later, when I had been doing my show, Karen’s Restaurant Revue, for a few months. I was at a big celebrity party at UCLA, when all of a sudden I saw Taylor walking towards me. He came right up to me, put his face near mine, looked me straight in the eyes, and said, “Oh my God, I love you so much!” I absolutely could not believe it! I told him I loved him, too, and we were forever bonded after that. I even let him in on the fact that I was the “chicken wing girl,” and he knew exactly what I was talking about. (We joked about that all the time forever after.)

So we immediately started hanging out together, possibly even that week; we did so many things together.  We went to each other’s parties from the very beginning, called each other constantly, hung-out at each other’s houses, and even started sharing pals. Mr. X even became friends with Taylor!

One time, the two guys were doing a pilot together, and I was sitting in the audience. They had done the first run-through on-camera, and then began another, which I also stayed for. As I watched it, I noticed that Taylor was not on stage when he was supposed to be. So I ran back to Mr. X’s dressing room to see if anything was wrong, and there was Taylor sitting on the couch, white as a ghost. He looked at me and said, (totally straight-faced,) “Did you see they just cut me out of the show without telling me?” I thought he was kidding me, but that’s exactly what had happened! Instead of being upset about something that any actor would be upset about, he and I just started laughing. Mr. X took Taylor’s firing much worse than Taylor did!

There are so many stories to tell you of our crazy times together, but I chose just a couple of my favorites to share with you here.

Mr. X was out of town one time, and Taylor picked me up to go to lunch and to the Getty Villa down on Pacific Coast Highway. In addition to his acting, stand-up comedy, and writing, Taylor was also an artist. 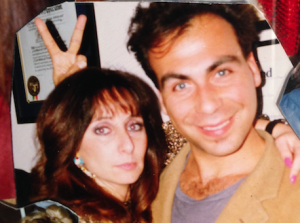 Karen Salkin and Taylor Negron. Photo by Jeanine Anderson. This was taken at one of my birthday extravaganzas, back in the day. It’s been hanging in my living room for many years now, yet I never noticed the fingers he was holding above my head until last night!

He decided he had to sketch me that day, and we were sitting on a bench in one of the gardens at the Getty. It was almost closing time, and I was really worried that they were going to kick us out. I kept seeing people exit, and finally, the guard came up to us and asked us to leave. He walked away, and I told Taylor that we had to leave right then. But Taylor informed me that it was okay for us to stay because he’s sketching me. I was young; what did I know?

So I stayed sitting there while he continued drawing. When the guard came over the third time to tell us that we absolutely had to leave that very second, Taylor just shut his eyes, slammed his fists down on the sketchbook he was using, and yelled at the guard, “You are oppressing art!” I think the guard was as shocked as I was, but he gathered himself, and told us that he was going to call the police if we didn’t leave that minute. So we finally left, and he continued the sketch at the beach. For every one of my birthdays after that, Taylor told me he was going to give me the sketch. Now with my birthday approaching in two days again, I’m really miserable that I never got it. But I’ll always have the fun memory of its conception.

This next line of Taylor’s I’ve been quoting the years. I had always had long straight hair, and that’s how I was known on my show. One time, by accident, a hairdresser cut off all my hair. And when I say “all,” I mean I looked like Anybodys from West Side Story! It was horrible!

But my show had to go on, so I forced myself to just be brave and shoot the first one, with my gigantic ears in full view of everyone. The day after it aired, Taylor called and gently asked, “When did you shoot that show that was on last night?” When I told him it had been just the week before, he made a weird little noise, and then just got quiet. I asked, “Taylor, is anything wrong?” And he said, “It’s just that…[long pause]…your ears are so big!!!” And then we laughed like hyenas. He was the only one of my friends who was brave enough to admit how Dumbo-esque my ears are. That’s another one we talked about for years.

He also was my first pal to be the one to think of something for us to do, in a long while. I just sort-of wound-up being in charge of plans for everybody all the time, and my friends were happy to hang back and let me come up with constant activities. (Mr. X even calls me “the cruise director.”) With Taylor, if I had thought of the first thing to do in an evening, he’d always think of the next thing, like to go to dinner, and where. I can’t tell you how much I appreciated that because I was so sick of being the only one to plan stuff.

He always wanted us to write a show together, with us playing brother and sister.  He’d laugh just starting to plan it.  I can’t believe that we never found the time to really work on it.

We laughed so hard together, and had so many little inside jokes, that at times I felt like I was his only friend.  (Which, of course, I knew I wasn’t.)  But then yesterday, I saw all the twitter tributes to him, and realized just how beloved in the industry, and by audiences, he was.  No one would have enjoyed that adoration more than Taylor.

The one thing that is giving me comfort right now is the knowledge of what a great life Taylor really had. He was very always popular and much loved, and had much humor and laughter in his life, which are such important aspects of being here on earth.

Let the extreme sadness of his passing be a lesson to us all to make time to nurture our favorite friendships, rather than pay attention to just work, laziness, and minutia.  He would be happy to have helped us out.