This is a sad one for me. But even sadder than the recent passing of long time super-publicist Nanci Ryder is that she lived with ALS for the past six years. That’s a disease that needs to be cured right away. It’s beyond heartbreaking.

Even though I had not seen Nanci for very many years now, (which is actually a tad odd because we live near enough to each other, and travel in similar circles,) we were very close at the beginning of my career, of which she was a big part. 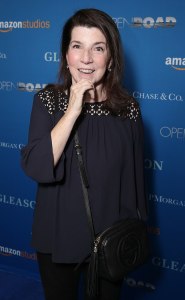 Before her major show business success, she was the assistant to my talent manager, Stu Ehrlich. Because we were both New York girls, she was usually the one assigned to take me under her wing. And, even though she was older and way more mature than my naïve self, we became really good friends. I always looked up to her. (I still chuckle over this one episode—I stopped by to see her on the way to an audition, and when I left, she called Stuart and told him he had to talk to me because I had on the wrong label of pants! When he told me, I had no idea what he was even saying; even though I had modeled in New York from the time I was thirteen, I didn’t know one designer from the next! Leave it to Nanci to be versed in fashion even back then!)

I had also just started seeing Mr. X at that time, but even then he didn’t like to go out, so Nanci and I often painted the town together. And in-between, she took me to pool parties and comedy clubs and the like. She even shared her guy friends with me, which we ladies all know is not done too much.

She came to all my parties, and we gabbed on the phone when we weren’t together. She was the first one to run over to see my first precious pup, Bud, the second we got home from choosing him. She loved dogs, especially her own little fluffy white girl that she had back then.

As soon as I started doing my TV show, Nanci asked me if I would please use her hairdresser friend, Paul Jasperson, to do my hair for it, so we would find fame together. (Which, I’m proud to say, we did.) She was always looking out for people like that.

And when she moved on to be an assistant at an acting agency, she quickly got Mr. X to sign with them. She was always putting deals together before she was even a power player herself!

I’ll never forget when she told me she wanted to start her own PR firm because she was handling Michael J. Fox at someone else’s company, and Michael was more than happy to go it alone with her. She was a tad trepidatious, so she asked me if I thought she could do it. And, of course, I was all for it. That one brave move of hers set her up for the rest of her life. I’ve always loved seeing the beginning of so illustrious a career!

As the years went on, Nanci and I drifted apart; nothing dramatic happened at all—she just started being with her clients all the time, and I got into running the dance club scene with my new (and younger) posse. Nanci became a major grown-up, while I went the other direction. It happens.

Nanci Ryder, back in the day. Photo by Barry King.

But I always followed, and cheered for, her career. And it appeared that she also did mine. We bumped into each other from time to time, and always planned to get together. But time just got away from us.

Along the way, Nanci joined forces with two established men to form the mega PR firm, Baker-Winokur-Ryder. I’m often at events with one of those partners, and I always tell him to tell her hi for Mr. X and me. And when I said that six years ago, a pained look came across his face. I knew she had successfully fought breast cancer some years prior, so that’s where my mind immediately went. But when he said she had been diagnosed with ALS, I felt sick to my stomach. I could not imagine the vibrant, always-smiling-and-laughing-and-chatting Nanci Ryder not being able to talk! It was just not fair. She still had a couple of good enough years after that, but now the insidious disease has ended her life. From what I’ve been told, she was cheerful until the end, which warms my heart.

But for now, I just want to remember Nanci advising me on what to wear, and giggling with me over which of her guy friends I should agree to go out with when Mr. X and I would have a fight.

And I’ll never forget this one amusing instance: when I met her, she was pretty young, but was already divorced! That was so weird to my immature self, but she told me that she had gotten married, even though she wasn’t really in love, because she knew her Long Island Jewish parents would rather tell their friends that she was divorced instead of never being married! This way, she got it all over with. That really cracked me up.

It still does. That story just put a smile on my face just typing it! And that’s how I choose to remember Nanci Ryder.

As sad as it is that Nanci’s gone, (especially for her many famous clients, who became her family over the years,) I’m glad that she’s out of that wheelchair and free on the other side.