I had a soul-crushing shock earlier this week when I learned that my former variety agent, the darling Fred Wostbrock, had passed away. That guy had never been less than vibrant in the over two decades that I’ve known him. And with that strong, clear, booming voice of his, I just thought he would live forever. I think we all did. 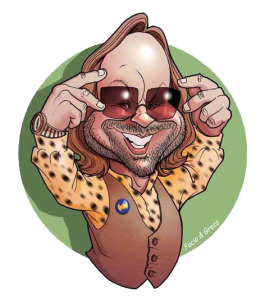 There’s so much to say about my entertaining old pal. That man absolutely adored his clients! I’ve seriously never met another agent like him. And he loved wearing those tight pants! His ‘70s hipster appearance always brought a smile to my face.

Even though, as someone who so respects the English language, I sort-of hated this one thing about him, I also appreciated the kindness of it—Fred let people mispronounce his name, to make it more convenient for them. (His last name is “Wostbrock,” but he never corrected the idiots who insisted on calling him “Westbrook.” He even started doing it himself, to make it easier on everybody!) When I’d beg him to please set people straight on his name, he’d just shrug his shoulders and resignedly say, “What are you going to do?”

He was also uber-neat. I once brought an advertising exec to a meeting with him, and when Fred took a phone call, the ad guy pointed-out that I was making a mess with my headshots. He said, “Can’t you see how neat the guy is?! There’s not even a paperclip out of place in his whole office!”

And, if there was something nice to say, where others would leave their compliments in their thoughts, Fred made sure to give you your props. I loved going in to see him.  He always analyzed exactly what was good about me each time, from head to toe, which inspired me to leave his office with my head held a little higher than when I got there.

And when others would have annoyed me with this agent request, he made me laugh: Through Fred, Playboy kept offering me more and more money to pose for them. Of course, I kept declining, but, every time they came back with more, Fred begged me to do it. Instead of getting exasperated with him, I just laughed, because it was Fred. I would have heavily chastised anyone else. But he had such a twinkle in his eye about it, (and even in his voice, if we were discussing it on the phone,) how could I be angry with him?

Here’s something else that impressed me about him: I’ve been giving my business people holiday gifts for just about my entire professional life, with barely even a “thank you” from most of the recipients. So, I was in for a wonderful surprise when, during our first year together, I gave Fred a book about game shows, which is the thing he loved most in life. He not only thanked me profusely for it, he also broke down for me why it was such a thoughtful gift! To this day, I’ve never received a more wonderful acknowledgement than that one. 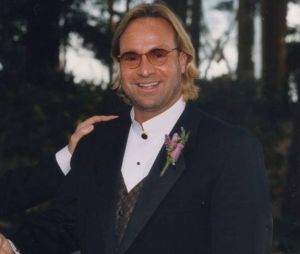 I’ve felt a tad guilty for a long while because someone in the business lured me away from him several years ago.  A talent coordinator who watched my show insisted that I go with a different agent, because, as she put it, “Fred represents only old men hosts!”  But that was one of the very things that made him so endearing. When so many others in the biz have forgotten about that category, Fred talked about those clients as though they were Bradley Cooper or Ryan Gosling! (But the woman did convince me to move. And, happily for me, Fred took the news as graciously as he did everything, and wished me all the luck in the world. And made it clear that he was happy to stay in touch.)

Even though, since the time that I left him professionally, we haven’t talked that much, the second we did connect, we picked-up as though we had just talked the day before. Fred always asked the most aware, thoughtful questions, and every single time that we spoke, we had a good laugh about a childhood photo of him that he kept in a secret drawer to show to only a very few select people. I’ll never forget that fun!

Fred always had a big smile on his face. Which is making me have one on mine as I’m writing this, if only through my tears.