Earlier this month, Dennis Edwards, one of the three main lead singers for iconic Motown group, the Temptations, quietly passed away. There had not even been any news that he was ill, so his death came as a shock. 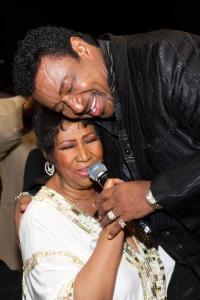 I had the good fortune to know him a little bit back in the day. Here are those stories:

When I was doing my TV show, Karen’s Restaurant Revue, the guy who booked a concert venue in Beverly Hills called and asked me to open for Aretha Franklin. Of course, I was not a stand-up comedian, but because my show was considered to be so amusing, people often referred to me as a “sit-down” comedian. I knew I didn’t want to do stand-up, and I assumed it was a prank, anyway, so I told him that I didn’t want to open for Aretha. But a beat later, I cheekily asked, “Do you have the Temptations?” To which he answered, “Yes! With the Four Tops!” I almost fainted. 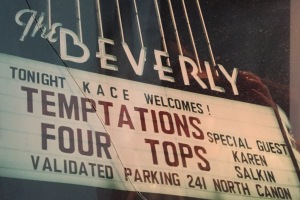 The Marquee of my name with the Temps and Tops! I still can’t believe it, after all these years. (The glass on the frame this photo is in is cracked, in case you were wondering what that line is.) Photo by Karen Salkin.

I had been a fan of both Motown groups, but especially the Temps, for almost my entire life! Just a few years before that, Mr. X and I were privileged to see a Temptations “reunion” show, featuring every guy who had ever been a part of that classic group. It was amazing. And we had the privilege of meeting a few of them at the after-party.

But now I had the chance to actually work with them?! You can bet that I didn’t care that I might embarrass myself—I just had to take the gig! So, I declined the offer of Aretha, and accepted the one with the guys. (In hindsight, I’m sure that Aretha would have hated me, a skinny little white girl, with no apparent talent, to boot!)

All nine singers, (for both groups,) were lovely to me. And that not only Mr. X, but also my show assistant at the time and several of my other pals got to hang with them a bit, too, and my ex-boyfriend got to announce the show with his deep voice, was more than icing on the cake. It was actually two-thirds of the layers! 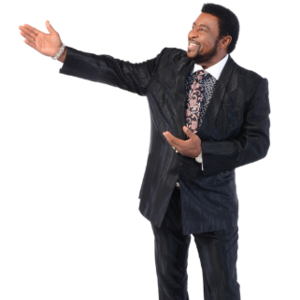 I saw the Temps occasionally around town, at a party here and there, whenever they performed in LA. And then, another miracle—my friend Peter Bunetta called to tell me that he was producing an album for them! And invited me to the recording sessions!

I went to the first one, half expecting the guys to ask me to leave. Think about it—would you like an audience while you’re working? (My situation didn’t count because it was a TV show—of course I had to have people watch me work! But that wasn’t behind-the-scenes toil, as recording an album is!)

So, the first day, Dennis was putting down his lead tracks. He seemed to be happy that I was there. But he sort-of struggled with the songs, which I was surprised to see. I had always viewed him as such a rock. It was a fascinating look at the recording process. 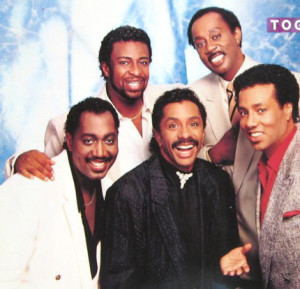 When I showed-up the next day, Dennis was the first one to greet me, and he said, “Ah, you’re here to hear the pretty guys singing today.” I had never thought of it like that. To me, the lead is always the star, and I just assumed that Dennis regarded himself as such. But the way he said that me made me realize just how much he admired the rest of the singers in the group. And I realized that Dennis gave the songs grit, Melvin Franklin gave them the bass, but the other three made the songs pretty!!! That was lovely knowledge that Dennis Edwards gave me, and I’ve never forgotten it.

And, at this point in time, the world has lost just about all of the real Temptations. (There are only two left—Ron Tyson and Otis Williams, who, coincidentally enough, is the guy who started the group!) Somehow, I sort-of expected Dennis to be the last one standing.

But thank goodness we’ll always have his music.