Trending
You are at:Home»TRIBUTE»TRIBUTE: YOGI BERRA, RIP
By Karen Salkin on October 6, 2015 · TRIBUTE

I know this tribute is a little later than usual, but, even though I never met the man, Yogi Berra is a true icon, especially to us baseball fans in general, and us Yankees nuts in specific, that I just had to celebrate him, no matter when. And, it turns-out that today is actually the perfect time because Yogi’s beloved Yanks are playing tonight in their first post-season game in three years. And I’m sure Yogi will be in their hearts the whole way. 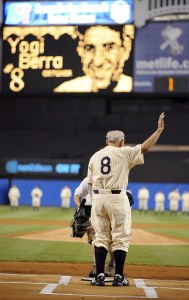 I’m so grateful that, a few months prior to his unexpected passing, I did something I’ve never done before, on Yogi’s behalf.  I not only signed the petition to nominate him for the Presidential Medal of Freedom, I also posted it on my personal Facebook page! (As opposed to my Fan Page, which is really the only reason I’m on Facebook to begin with.) I very rarely post anything there! But I so wanted to do my little part to help get enough signatures for that to happen, and it looked like it didn’t have a chance, so I was more than happy to help in my own minuscule way.

And guess what? Once everyone in the country knew about it, (not because of me, of course, but in general,) the petition did get enough signatures! I know his family will be proud if and when it becomes a reality, which I strongly feel it will, especially with sports fan Obama on the case.

So, all of that aside, I, along with millions of others, am so sad to have lost Yogi, even though he had a long, and seemingly happy, life. I just thought he’d go on forever, entertaining us all the way. It’s amazing that one little, funny-looking, malaprop-speaking, former baseball player from Missouri could have that effect on so many. He really was the definition of “one of a kind.” 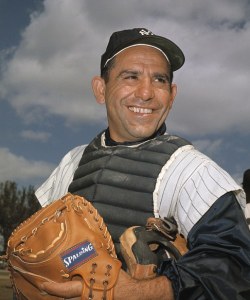 Few athletes, especially one so unassuming, has made such an impact on the world. I doubt there are many, especially in this country, no matter their age, who don’t know the name Yogi Berra. I’m sure that he’s actually quoted somewhere just about every day, even by non-sports-fans. They probably don’t even know from whence the sayings come!

As a former teacher, with educator parents, it’s usually like nails on a chalkboard when anyone misspeaks. But Yogi-isms are so charming that I can’t help but love them. And I understand exactly what he’s meant each time. They’re even correct a lot of the time! Think about it–“It’s not over till it’s over” is 100% correct!

Yogi Berra is responsible for soooo many sayings in the modern vernacular that no one can even realize them all. Lest we forget, let me conclude this small tribute to him with just a few of his most famous quotes:

“It’s deja vu all over again.”

“When you come to a fork in the road… take it.”

“The future ain’t what it used to be.”

“We made too many wrong mistakes.”

“It gets late early out here.”

“If the world were perfect, it wouldn’t be.”

“I didn’t really say everything I said.”