Trending
You are at:Home»TRIBUTE»TRIBUTE: TRIBUTE TO CAROLE WILCOX GOEBELS
By Karen Salkin on November 30, 2012 · TRIBUTE

I usually don’t do such personal tributes, except to my mother and Clarence, of course, but I just can’t let the passing of one of my best friends go without paying my public respects to her. Even though I don’t know her recent husband, and haven’t seen her immediate family for a few years now, and we have no mutual friends, I’m sure that the many people who knew her through me will appreciate the opportunity to be reminded of her goodness. [Note: This tribute is almost as much about our friendship as it as about Carole herself, but the two are intertwined for me, and explain a lot about how good and kind and fun she was.] 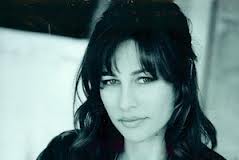 To the fashion world, Carole Goebels was a talented, well-liked belt designer. To me, she was one of the best friends I ever had. We met over a decade ago at a garage sale, where both of us were reluctantly participating. She was beautiful and classy-looking; she had the kind of beauty that belied how fun she was. Her pre-teen son and I got along great that day, too, and she called me the next day to say let’s go do something.

She told me right away why she wanted to be my friend, and it’s something I had never ever thought of before, for me or anyone else for that matter, but that I always remind myself of when things are looking bad: she was attracted to my confidence! I didn’t even know I had any! But Carole saying that actually instilled it in me, and it’s a precious gift she gave me.

That was thirteen years ago, and for the next nine, we spoke every day. On the nights that we weren’t together, because I wanted to stay home and watch TV, she made me call her in every commercial, and we laughed each time. If she had a date, she would call me before, during, and after, so we could figure it all out. If these poor guys only knew just how many chuckles we got out of them.

Of course, none of these guys were good enough for her in my book. (In anyone else’s book who knew her, too. Because she couldn’t be rude to anybody, she attracted a lot of creeps.) And the good ones were probably too intimidated by her good looks to ask her out. She would have been perfect for someone good, too; she was funny, enthusiastic, looked great, cooked, sewed, you name it. Even all of my girlfriends liked her! (She was the only one of my friends who was universally liked. None of them had a bad word to say about her. They all disliked several of the others, but they all wanted to be around Carole. How could we lose such a person??? It just doesn’t seem fair.)

In thirteen and a half years of friendship, we had only one small disagreement. That’s pretty amazing. She had a few other good friends, mainly her high school group, and her one belt company partner. But that’s all she needed. Even though there were often petty arguements among the group members, she stuck up for them all. In all the time I knew her, there was only one person she ever spoke against, and trust me, that person deserved it! In spades. Still, she would beg me to invite that woman to my parties because Carole felt the woman had nothing else going on in her life. So, of course, Carole looked beyond the evil, like a character out of a fairy tale.

Carole was not just generous of spirit but with her time and money, as well. We had been pals for only five months when she got me a lovely gift, for being what she deemed “the best friend anyone could have.” No one else I know would even think of that! If she received a gift certificate for a restaurant, it was always for her son and me, as well. If a salon offered to do her hair, it was always, “and for my friend, Karen, too.” She was like a little kid, who always had to include her daily best pal. (I never say “best friend” about anyone, but I agreed with Carole’s assessment that we were indeed “daily best pals,” though we had other long-time friends who were in the mix, as well.)

So, several years ago, her belt-design business took off, and then, not long after, she found a guy she liked and got married again. I was thrilled that this kind, lovely girl had finally found happiness. And with all those new responsibilities, she didn’t have a lot of time to go out for fun anymore. Even so, we stayed equally close in our hearts, keeping up with phone calls mostly, and emails and occasional visits, still laughing all the time. We even hassled to get together in New York a few years ago!

And then came the terrible news two years ago that she had a horrific kind of cancer. Even with the second phone call on that topic, she was thinking of everyone else; she was planning for someone to drive me to her funeral, so I wouldn’t have to drive while I was crying! (When I told her not to even think of that topic, but if it came to that, of course Mr. X would be driving me, along with himself, she exclaimed, “He’s coming to my funeral?! I’m so honored!,” and then we laughed like hyenas at the absurdity of it all.) And she asked me to promise to always be there for her son. Over the next two years, she chose which stories she wanted me to tell at her funeral, and I’d always say that we can’t think like that.

Last Christmas, even when her cancer had returned in a big way, (after several months of remission,) she was the first pal to write to me the night my mother died, and again the first one to call the next day. And one of the very few who remembered my birthday just three weeks later, in what was my most sorrowful time. She was always there for her friends.

So now, after a long, hard fight, she’s in heaven with her own precious mother, whom she had lost so many years ago. I’m not sad for Carole, I’m sad for the rest of us.

The main focus of her life was her son, Justin, of whom she had an abiding love. She always called him her ” baby,” even at around 6’6″ and twenty-four years of age!

She ignored the bad in just about everyone, even her chintzy, rich ex-husband, (who did nothing for her,) and the one rotten person we knew in common. She hated maligning anyone. (But she got gleeful hearing me do it!) There should be so many more people in the world like her.

She did so many things for so many people, without seeking one ounce of credit. She drove an elderly neighbor to the market, doctors, etc. even when she had no time. She bought everyone gifts at the drop of a hat and took them out for meals. She was a volunteer at a hospital, even when she had little money herself and should have been looking for a paying job. She gave up things she’d much rather be doing, including getting some much needed rest, to do for others; baby-sitting, listening to their phone nonsense, going places with them because they had no one else. She even kept in contact with the woman we met through, whom no one else ever liked, because Carole felt bad for her that she had nothing else going on in her life.

Paul McCartney was the lifelong love of her life. I had to yield my crush on him to her. Mr. X always said that Paul would have snapped me up if he had met me, but I’ve always been even more positive that he would have been more thrilled with Carole. She never met him, but she did get to bond with his daughter Stella, in Paris earlier this year, for which I’m very grateful. I know it’s nuts, but I do feel bad that Carole didn’t get her wish of winding-up with Paul, which I feel is more his loss than hers. I just would have loved for her to experience that supreme happiness.

I know this is already long, because my head’s spinning too much to write very well right now, but I do have to share two things that made us laugh so much. This is the main story she wanted me to tell at her funeral, even though I told her nobody would get it but us:

Mr. X and I used to have small groups of people over for special occasions. I always tried to incorporate a new person or two, especially if it was a single guy for Carole. So, this one time, I invited a guy I had recently met on a plane. He was a successful musician and we were sitting in Business Class, (two things she cared about, which even she would laughingly tell you,) so I figured he might just be the one! (Let’s call him Mike.)

Carole and I never got to be alone to dish during the fete, but when she called the next day to thank me, (I told you she was special,) I asked what she thought of Mike. She answered, “Doesn’t he have a strange eye?,” to which we still, shockingly didn’t laugh yet. I hadn’t noticed, so I asked which one. She thought a second, then answered, “The one near the door.” And then we laughed for at least ten minutes in a row, so hard that I fell off the couch. Who else would get that??? That’s the kind of hole I now have in my life.

The other story is of her son, when he was a young teen-ager with a crush on me. She loved that! She called me one night laughing so hard that it took me awhile to understand what she was saying. She had just come home from dinner and sat down on her bed to call me, when she noticed that her bed and carpet near the phone were soaking wet. She couldn’t figure out what had happened, but when she checked her machine for messages, she heard me leaving a long one, which her son had picked-up in the middle, to chat with me. It turned-out, he was taking a bath, but heard my voice and jumped-out so fast to pick-up the phone before I would hang-up that he brought all the water with him! She just loved that he was so into me! And I loved that she loved it!

I was actually smiling writing those last two stories. But now my mood is back to being somber. Because as this tribute must come to an end, I have to once again face my loss. A loss none of us should have to bear.

So, Carole, if you’re reading this in heaven, please know just how missed you are. By everyone. I now have a hole in my life that no other friend can fill. That’s because I know of not many others as nice as you. I’m glad that you’re now re-united with you mother and father, and little dog, Ruby, as well. And I’m grateful that your pain is over, even as mine just begins.