Trending
You are at:Home»DINING»TRIBUTE: MEMORIES OF ELAINE’S
By Karen Salkin on December 8, 2010 · DINING, NEW YORK

I was sad to hear of the passing last week of Elaine Kaufman, famous owner of her even-more-famous eponymous New York restaurant, Elaine’s.

I dined there only three times in all these years, but each one was memorable. The first time was when I was just starting out in the business. I became friendly with Robert Altman’s film editors here in L.A., and the group happened to be in New York for a premiere when I was there for my father’s birthday. 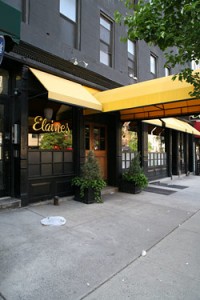 It was perfect–we had all met up for the event the night before, and now it was a Sunday afternoon in December, and freezing out. A member of Altman’s inner circle brought me to his house for a casual afternoon. I was so young and green, I really wasn’t even sure who he was! As a matter of fact, when people who knew me heard about this meeting, they all assumed that Altman would “love” me, and make me one of his kooky stars. I really knew nothing of his ways then, but if I had known about him, I would have thought so, too!

But no, he basically brushed me aside because I don’t drink. And that was a group of hard drinkers, let me tell you. I rarely have anything of significance to say to drunk people, let alone grown men who imbibe, so I was just quiet from being uncomfortable. I didn’t care how fabulous this crowd was–I wanted to get out of there.

Until, that is, Altman said we were going to Elaine’s for an early Sunday night dinner. I had never heard of it, (remember–I was nescient then,) but I perked right up, just at the thought of going to a Manhattan restaurant! As soon as we entered, though, I knew it was something special. Elaine greeted Bob as an old friend, which I’m sure he was, since, as I now know, she hung around with the artsy crowd.

Anyway, the only food I remember from that day was the specialty polenta, which I had also never heard of (did I mention I was young?) and did not like at all, but I can tell you where everyone was sitting and what they had on. Well, actually, I can do that with most places, but at Elaine’s, I felt like we were in a very New York movie.

As years went on, and I moved away from that crowd, when I read of Elaine’s, I was always a little jealous of my younger self. 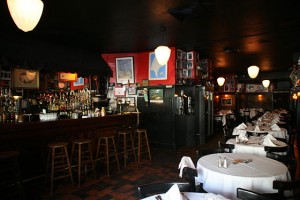 Until I started dating Mr. X, that is! Believe it or not, he was the one with all the fun plans than, not I! (I was still very young, and hadn’t become “Karen” from Karen’s Restaurant Revue yet.) So, we stayed at the Plaza Hotel and he shepherded me to hip clubs and eateries in New York. He took me to Elaine’s on a Saturday night, and they gave us a great front room table. I’m even more impressed over that detail now.

All of a sudden, we saw tons of flashes go off, and wondered just who had arrived. It turned-out to be Mr. X’s ex! And they didn’t talk at the time. And she had been my pal, too, and didn’t know that he and I were together yet. (Don’t get your panties in a knot–I didn’t steal him; it just worked-out that way. And we were totally meant to be together.)

The whole thing was a very uncomfortable show biz moment, and when Robin Leach took us to dinner the next night, (don’t ask,) he had already heard about the incident. I was surprised, because it really was just our private business, but then I realized–of course word had gotten out–it happened at Elaine’s! 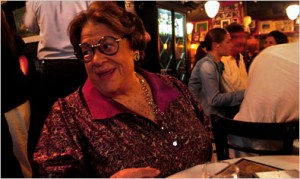 So, years went on again, and I had been to about a zillion New York restaurants by then. But my friend, Buzzfoto founder Brad Elterman, was coming to town while I was there, and my mother told me that he called and said to tell me he was taking me to Elaine’s the next night. Since my dream is to eat at every restaurant in New York and Los Angeles, at first I was a tad disappointed because I had already been there. Twice. But then I thought–how often does someone else make the plan, and how often does someone take me to a wonderful institution such as that? And I was instantly appreciative and looking forward to it.

I would have been happy to just be in New York having fun with Brad, but this made it even better. Walking into Elaine’s that night, I still felt like that little girl with the Altman gang. Until Keith Hernandez, former Met and now an announcer for the team, and Elaine’s regular, said hi to me because we had met in Aspen that summer, and hung-out a bit. It made me feel like I belonged.

Brad and I had a wonderful time, and loved watching Elaine herself flit from table to table, in her caftan, noshing along the way. And now that we’ll never have the opportunity to watch her do that again, I’m especially grateful for that time.