Trending
You are at:Home»TRIBUTE»TRIBUTE: JACK LALANNE
By Karen Salkin on January 24, 2011 · TRIBUTE

Even though he was the ripe old age of 96, I was surprised and saddened to read that fitness pioneer and star Jack LaLanne had passed away yesterday. I actually knew him for a brief while! And a stronger man I cannot even imagine. I’ve known of him my entire life and expected him to outlive us all. 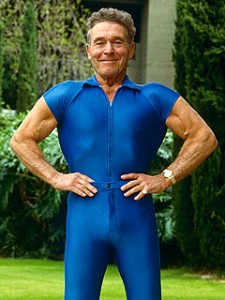 Here’s my personal memory of the one iota of time I spent with the LaLanne’s. I had recently begun my show, Karen’s Restaurant Revue, and, as one of the few females who was willing to make a fool of herself for charity, I was often invited to participate in celebrity charity sporting events, even though I had absolutely no athletic ability whatsoever. (But I was very young and skinny, so I guess everyone assumed I could do all these things. Or at least, wanted to see me try!)

I met Jack and his lovely, but equally tough, wife, Elaine LaLanne (yes, I do know her name rhymes,) while I playing in some tennis tournament. They asked me right away if I would be one of the celebrities in their upcoming Golf Classic, so of course I said yes! I had, after all, dated a golf star in high school, who had shown me how to putt by wrapping his arms around me, (you know, the old school guy-getting-to-touch-you ploy,) so I figured that I’d be able to compete without embarrassing myself. Pretty naïve, eh?

I hadn’t realized that the grown-up men who play alongside you have contributed heavily to the chosen charity and are out to be the winners! I’m just lucky that my team wound-up winning, even with me as their biggest handicap.

So, anyway, I made Mr. X drive me up to Morro Bay for the week-end, so he, too, could meet the venerable Jack LaLanne, who was lovely to me. This week-end wound-up teaching me that, indeed, the show must always go on!

I had hurt my back pretty badly the night before, but I would never cancel on a commitment. And I figured what better place to find out what to do for such an injury–I mean, if Jack LaLanne wouldn’t know, then no one would!

The first night there, I made my way down to the pre-event cocktail party, although gingerly and rocking a back brace. Some of the other celebs felt bad for me and they all said, “Let’s get Elaine–she’ll know what to do!” (Kind-of like when the Scarecrow told the yellow brick road gang that they should “ask the wizard! He’ll know what to do!”) I was so relieved that this motherly-type, who was so familiar with her husband’s superior physical knowledge, was going to come help my poor aching back. (I didn’t want to bother the man himself.)

So, here she comes and asks me what exactly is wrong. I tell her and, with bated breath, await her words of wisdom and healing. She tells me, “Well, I don’t care what’s wrong with you, you’re playing tomorrow! We need you. So, buck up and get on with it.” I loved it–a woman who told it like it is. I was so glad that I hadn’t bothered Jack–he probably would have made me drop and give him twenty! (Push-ups, for those of you who aren’t familiar with boot camp terms, or whatever terminology that is.)

And let me tell you, I did buck-up and made it through. And as I said, my team even won!

I was so happy that I hadn’t let the charity down. But more importantly, that I was able to share part of Mr. LaLanne’s week-end and charity vision. The whole thing was surreal to me, and still is, even as I recount this tale to you.

I wish I had spent more time with the LaLanne’s because I think I would have been made super-healthy, just like Heidi’s grandfather did with Clara. Jack would have for sure whipped me into shape.

Whenever I’d see him on TV, I’d be amazed by his longevity, and even more than that, the incredible shape that he was still in. And just look at what he started for all of us health-and-exercise-obsessed Americans! We all owe Jack LaLanne a debt of gratitude. Let’s all do a set of jumping jacks for him right now, rather than a moment of silence, and keep his legacy going.