I came home yesterday afternoon to the shocking news that my good buddy of very many years, Geoff Miller, had died. I kept thinking it was a mistake. This super-intelligent, always upbeat, lovely man, not to mention handsome, was never going to share his behind-the-scenes-in-Los Angeles secrets with me anymore. 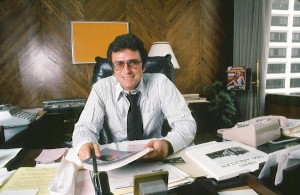 I just always expected Geoff to be around forever, especially because he looked about twenty years younger than his real age, which I was repeatedly surprised about. I’ve honestly never seen a man with younger-looking hands, and he always joked that it was due to the fact that “they never saw an honest day’s work.” Yeah, right.

As I understand it, he began working in publishing even before he left school, and founded what was to become Los Angeles Magazine, serving as its first editor and later, its publisher.

He was the first person in the biz to order a profile of me when my show was starting-out. The creepy woman reporter who was assigned to the piece snippily told me, “The only reason I’m writing this is because my editor loves your show.” I knew right then and there that Geoff and I were destined to be friends. And it was an easy thing to be. Everybody loved Geoff, with his easy-going demeanor and knowledge of all subjects in the world. What a mind that guy had.

We became good friends a couple of years after the article was published, upon meeting at a lovely afternoon soiree at the Bistro Garden. Besides actually socializing with him on many occasions, we bumped into each other at least once a week at the many in-crowd happenings we were now both invited to.

At one of those down the line, a pretty woman in glasses appeared and Geoff went right over to her, took her hands, and they stared into each other’s eyes. It turned-out to be his soon-to-be wife, and in my opinion, soul-mate, actress Kathryn Leigh Scott, and in all the years I’ve known them together since, that’s how they’ve always greeted each other. How any couples can claim that record? (It’s a far cry from the way that the fiery Mr. X and I greet each other, I can sure tell you that!)

For several years, Mr. X and I went to their house for the best St. Patrick’s parties ever. Their guest lists were as eclectic as Geoff’s tastes were and I always felt like I was in a movie about the intelligentsia over there. I always pictured the assemblage in forties film attire, with smoke permeating the room, even though everyone was modern and there was, thankfully, no smoke. But that’s what the heady atmosphere portrayed to this simple girl from Brooklyn.

One of my favorite things about Geoff was that I could always rag on one guest or another to him without him telling me I was wrong. He just laughed at my observations and tried to say something nice about the person, and then laughed again. He never tried to make me feel bad about what I had said. He even lightheartedly told me what they had said about me, and made me enjoy it, even when they were maligning me. I was just glad to have been a topic of conversation in Geoff Miller’s world.

He’s one person who never made me feel bad when I called him, no matter what my topic. He always made time for my inanity, and if I had a question, he’d do his best to find an answer for me.

And now calls and emails are coming in from people who want to commiserate with me about the loss of so vital a life. It turns out, Geoff had been struggling with a rare degenerative brain disease for quite awhile, but I had, shamefully, lost touch with so many people in the last horrible year, that I didn’t know about it.

So, besides all my wonderful memories of him, what I’m taking is this last invaluable lesson this great man taught me, through his passing–to never take it for granted that I’m going to see everyone again down the road. And I’m sharing that lesson with you. We all have to make the absolute best effort we can to see everyone we care about while we have the chance. And to tell everyone all the wonderful things we think about them as often as we can.

I thank his gracious wife Kathryn for cheering me up about the situation yesterday when I called to do that for her. I stated blubbering the second I heard her voice and she helped me through it. I’m so glad that Geoff will live on in her, but his is one presence I will truly miss.