I actually let out a gasp when I read the awful news last week—Gail Zappa had passed away. I had never even known that she was sick. 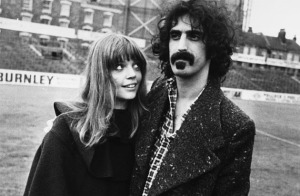 I adore this photo of Gail and Frank Zappa when they were young.

I have always cherished my very brief time with the Zappas, and Gail was the one at the top. To my eye, she was a wonderful mother, a perfect wife, and a lovely acquaintance.

So, in tribute to her, here’s my seldom-told story about meeting the Zappa family.

I had been doing my show, Karen’s Restaurant Revue, for just a very short time, when I was invited to appear on a telethon. Moon Unit Zappa was on it, as well, and she came up to me after our time on the show to declare her fan-ship. She was adorable.

Mr. X told me to ask her if she wanted to do my show, despite the fact that I had never had a guest on it before! But, he always has a knack with show biz ideas, so I asked, and Moon was thrilled.

I thought we should go to dinner first, so we’d have more to talk about on-air, but I didn’t want her parents to think I was weird, (because she was younger than I, and still lived at home,) so I nixed that plan in my head. All of a sudden, Moon called me, and said, “My mom thinks we should go to dinner before we tape the show.” OMG! Great minds…

So, Gail invited me over to meet the rest of the fam, who could not have been more welcoming. Dweezil had even made me his famous (in the family) chocolate pudding!!! I so appreciated that!

And Gail was the force behind it all. What an incredibly mentally-stable mother she was! I could not have been more impressed with her. She made me feel so at home. I had approached the experience with such trepidation, but Gail immediately put me at ease. She even explained all her children’s unique monikers to me!

Then Moon told me her dad wanted to meet me, and had asked for me to come down to his home music studio to talk with him.  I have to admit–I was so scared; this was Frank Zappa, for goodness sake!  What man could be scarier than that?!  Or so I thought. I was beyond shocked when he told me that he was a fan of mine, and wanted me to listen to the oratorio he was composing, and let him know what I thought of it!  OMG!  He was the least-frightening father-of-a-friend ever!!!  I immediately loved that whole fam! 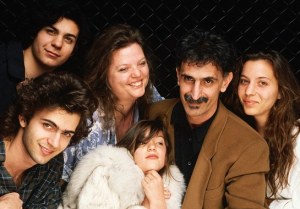 So, about a week later, Moon did my show.  Lovely Gail brought all the kids to sit in the audience. She made it fun for them, and comfortable for me. This was the wife of one of the most famous musicians of all time, who had probably met all the important people in the business by then, yet she seemed totally happy sitting amongst my pals, in the small audience, of my local cable show, in my tiny studio! You have no idea how special she made me feel.

I watched her occasionally as the taping went on, because I so wanted her to approve of her daughter’s new pal, and to this day, I love the memory of her throwing her head back and laughing with such abandon and joy at the fun that Moon and I were having. It really did mean the world to me.

And then time passed, and although I bumped into Moon from time to time, (we grew up to live semi-across the street from each other for brief time,) I never saw Frank or Gail again. I have thought of them from time-to-time, but life just passes by, filled with all the necessary-ish activities. And, I always think that I’ll see everyone again.

Even though I’m so sad that I won’t ever have the opportunity to remind Gail of this story, I’m happy in the knowledge that she’s now re-united with the love of her life. That must be comforting to their offspring, I’m sure.

So, RIP, Gail. And say hi to Frank for me, please.