Trending
You are at:Home»TRIBUTE»TRIBUTE: ELIZABETH TAYLOR
By Karen Salkin on March 23, 2011 · TRIBUTE

Elizabeth Taylor has died. And, as I’m sure many of you are also experiencing, I’m surprised at just how awful I feel at her loss. Just the other day, a premonition that she was not going to be here much longer washed over me, and I was really hoping that I was wrong. It just doesn’t seem right to have a world without her.

I literally was just awakened by a friend calling to talk about it, which is how I found-out the sad news, so this may not be as coherent as my usual writings, but I didn’t want to publish the somewhat frivolous column I had for today, in light of Ms. Taylor’s passing, so I’m rushing this along. [Note: Yes, this hour is a little late for me–I usually get up between 3and 7AM, so I was thrilled to be still be asleep a couple of hours later on this gloomy-looking day. Now, the gloom is appropriate.] 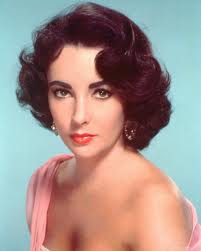 As a fan of old movies, I’m always absolutely amazed that there was ever a human being as gorgeous as Elizabeth Taylor. I just didn’t see how that was possible. Those eyes, that nose, that skin, that waist–there’s never been anyone who can compare. And she wasn’t just a pretty face, (or body)–she could really act!

And then she grew-up to be so kind and compassionate. She was the perfect pal for Michael Jackson, and I’ve always hated how cruel everyone was to them. The whole world turned into Revenge of the Nerds, when, in actuality, she’s one of the few who not only knew what he was going through with so much fame at an early age, but was good enough to reach-out to him. I hate the haters.

I met Ms. Taylor just once, about ten years ago, and for that, I’m really grateful because now I get to tell you all just how normal, yet nice, she was to me. We were both in the classy pharmacy in Bel-Air. She was there as a customer; I was outside talking to someone and saw her go in and could not believe that I was seeing Elizabeth Taylor in person and in a store I frequent! So, I’m embarrassed to say, I went in to try to see her closer, something I would usually do only for a guy, like Hugh Jackman.

As I was roaming the aisles, making like I was looking for something, too, she politely asked me if I knew where the item she was looking for was! Elizabeth Taylor talked to me!!! I still can’t believe it. I was angry at myself that I had no idea where it was, and offered to help her find it, but she told me not to worry about it and she’d ask a clerk. You know that I usually remember conversations word-for–word, but I was so starstruck that I heard it the way that the Peanuts gang hears grown-ups.

She was carrying her tiny white dog, I think it was a Maltese, and I told her how cute the dog was. So, she leant the dog towards me in her arms for me to see her better and/or pet her. Elizabeth Taylor was just a normal sweet woman! Who knew? Certainly not the awful press people who hounded her for her entire life. How dreadful of them.

I wanted to rush home and get Clarence for a playdate, but this was Elizabeth Taylor, for goodness sake. So, I just petted the pretty pooch and left the store. At the time, I vowed to return often, with Clarence in tow, to try to run into her again, but this time with my wits about me. But alas, as always happens with my cockamamie schemes, it fell by the wayside. Good thing, or I could have wound-up in the clink for stalking! Can you imagine? 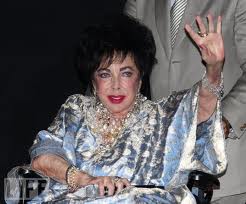 I saw her in person only once more–at the September 2009 Macy’s Passport fashion show to benefit AIDS research. She was brought-out on stage in a wheelchair, all dolled-up. It couldn’t have been easy, physically, for her to make that appearance, but it was for not only charity, but the one she was so passionate about. Right away, I felt that the general public just didn’t give her enough kudos for her true kindness. But, I’m content in the feeling that the people who counted knew the true measure of this icon.

So anyway, on this sad day of losing our last great real movie star, I just wanted to put in my two cents sticking-up for her on a miniscule personal level. I could tell in just those brief moments of meeting that Elizabeth Taylor was lovely. So, I guess all the nasty media goons have been correct all along–she wasn’t normal–she was far above it.