I hate writing articles like this. But I feel they must be done.

Every time I get my copy of the SAG-AFTRA magazine, I put off reading it. Yes, there’s a lot of interesting info in each one, but I dread getting to the In Memorium page. I’m always worried that I’ll see a name of someone who was very unexpectedly lost in the past few months.

And that’s what happened last week. I saw the name Al Anton, and immediately got sick to my stomach. I was hoping it was someone other than the gorgeous guy I’ve known since I’ve been in LA, but I know that SAG doesn’t let members double-up on names, so I had a horrible sinking feeling in my stomach as I ran to the computer to look it up.

And very sadly, I saw that cancer had claimed yet another lovely person I’ve known forever.

Al Anton and I were pals when we were younger. I had just moved to LA as a teen-ager, and one of the females who had taken me under her wing was dating Al’s best friend. So the four of us hung out quite a bit. He kept asking me out, but I had a boyfriend, so I had to say no. And trust me, it was really hard to say no to that gorgeous face with the incredible, piercing blur eyes. He had been one of the Winston Men, for goodness sake! And by far the best-looking of them. (Winston did a running campaign of ruggedly good-looking men, in those days, to try to rival the Marlboro Men. And Al looked like a better-looking, younger Tom Selleck.)

After that initial year or so, Al and I didn’t stay in touch, but bumped into each other often enough. When we did, we usually got together to do something shortly thereafter. When I was clubbing about a dozen years or so ago, he accompanied me to some of my club nights. The first time he came with me, he did something that endeared him to me even more. When he saw the tension that I had with some of my male partners in the promoting biz, he erroneously thought for a second that that tension was of a romantic nature, rather than the true financial problem that it really was. With a twinkle in his eye, he turned to me and said, “Okay, which one should we try to make jealous?” When I figured out what he was talking about, I let him in on the business aspect, and he and I had a great laugh about it.

Sometime after that, Al began dating Jackie, whom he wound-up marrying. I didn’t see them that often, but when I did, I loved them together. They came to at least one of my birthday extravaganzas that I used to throw, and I usually ran into them at a neighborhood fair every June.

I’ve been a little lax recently in seeing most of my basic friends, let alone the special guest star ones. So, of course, it hadn’t hit me that I hadn’t seen Al for a couple of years.

And then this very sad news last week, that he had passed in September. I seriously am having a hard time wrapping my head around the fact that I’ll never again see one of the few truly handsome, and good, guys that he was. 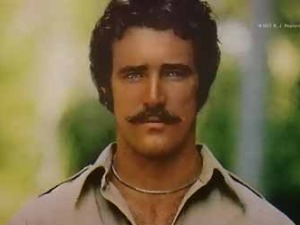 Al Anton as the Winston Man, back in the day.

Al Anton and I had an on-going joke; pretty soon after I met him, Al lent me the plaid shirt that he had worn in one of his Winston ads. And then every single time I saw him after that, he’d ask me if he was ever going to get it back. As the years moved on, he couldn’t believe I even still had it !

But I did! I had moved the shirt to New York many years ago, I guess because I needed flannel clothing more there than in LA. I always told him where it was, and that I’d try to remember to bring it back on my next trip East. And then just this May, when I finished packing-up everything I cared about from my Brooklyn house, I chuckled to myself that the shirt was finally going to be in Los Angeles, near Al. And I pictured the twinkle he would have in his eye when I would tell him that I actually might return it after all these years!

So, I’ll continue to hold it for him for now, and smile thinking of what his reaction would have been had I actually given it back to him in the coming months.

Rest in peace, Al Anton. You are already missed. My heart goes out to your loved ones, especially Jackie.