This play (which my pal, Alice, cutely described as an “older chick flick”) lets us in on twenty-four hours in the life of two senior citizen sisters in Israel. Because of my own very depressing relationship with my older sister, I may not exactly be the best person to review this sobering play. I’m afraid it made me space-out several times, reminding me of bad times that I’ve gone through with her, so I didn’t quite get every nuance of the scenario.

But maybe that’s the reaction that Two Sisters is supposed to elicit from audience members, to make them think about familial relationships. And, if so, it worked!

I do have to tell you something, that could have definitely shaded my experience at Theatre 40 on opening night, through no fault of theirs. [Note: In a minute, I’ll let you in on an exciting, special upcoming event there, starring husband-wife team of Richard Benjamin and Paula Prentiss, so please make sure to read that, too.] I grew-up thinking that a sister was someone who was meant to be mean to you and get you into trouble, not someone to share secrets with, and with whom to exchange thoughts and dreams and experiences. So, when I even hear the word, I always feel a twinge of sadness.

But enough about my real-life version of Two Sisters. Let’s discuss the original play. 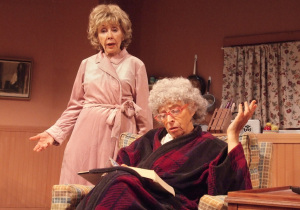 Sharron Shayne and Leda Siskind. Photo by Ed Krieger, as is the big pic at the top.

Alice pointed-out that it’s a treatise on one way in which “siblings operate,” and that it “sheds light on how people communicate on that level.” And it accomplishes all that in just one act, of only about an hour and a half!

I have to be honest and say that it is a tad depressing, while also being humorous. It made both of us worry about getting that old. The sisters portrayed are in their seventies, which isn’t that old. I have a few pals even more senior than these two characters, and their lives seem fuller and sunnier and more normal than what we saw portrayed on stage. We wanted to ask the mainly-that-age opening night crowd if that’s what life is really like at that age, but, if the answer had been “yes,” we didn’t really want to know!

We did see both actresses, Leda Siskind and Sharron Shayne, at the post-show reception, (which I have to laud, by the way, for always being so generous and sumptuous,) and they both appeared to be much more vibrant and full-of-life than their characters, so that cheered us a bit.

There is one very confusing fundamental aspect of the play, though—the sisters have very different accents! (On purpose.) The one who lives in Israel sounds sort-of German, and the one who lives in New York has a Brooklyn accent. They both appear a bit forced, so I’m sure those are acting or directing choices, and not how the women sound in real life. I assumed the play would explain that discrepancy, but it did not. The sisters keep mentioning things they did together as teen-agers, so they didn’t grow-up in different countries. And it’s basically a known fact that accents are set by the age of fifteen, so that part of the play needs to be explained in the writing. (I thought it was going to turn-out to be something to do with the Holocaust, but it appears I was wrong. If the women had been teens during World War II, they would have had to be different ages in 1996, when this play takes place, I think. And at least one of them would have had to mention it, too.)

But, as always, I was mad about the wonderful set by Jeff G. Rack. I don’t know how that guy keeps coming up with all these spot-on designs, production after production. And they’re all so different from each other. For Two Sisters, I was mesmerized by the featured appointments, which were perfection. One can’t help but notice the big wall clock in the center of the action; it provides a very clever touch from the get-go.

And now, here are the scoops on the very special Valentine’s two-night only production, which is a fund-raising event for the theatre:

One of the original celebrity couples, Richard Benjamin and Paula Prentiss, (whose son, Ross, was unwittingly a part of one of my funniest escapades back when I was still doing my show, Karen’s Restaurant Revue,) are doing a staged reading of the actual love letters between second U.S. President John Adams and his wife, Abigail, in Dearest Friend. Richard and Paula have been married for fifty-four years, and been together three years longer than that; if that’s not a Valentine’s story, I don’t know what is! 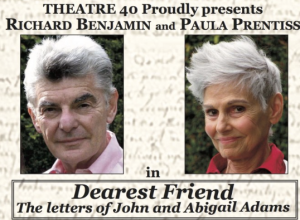 (Doesn’t the background look a bit like matzah? It’s actually handwriting, which one rarely sees anymore!)

The press release describes it thusly: “These powerful and moving letters, written as our nation was being formed, by one of America’s founders and his wife are extraordinary, moving and deeply insightful into their love for each other and for our great country.” And they wrote those letters with a quill! But however did they function before emojis? Maybe they just used Xs and Os.

They’ll be directed by actress Salome Jens, (whose one-woman show, Blonde Poison, was a highlight of Theatre 40’s previous season.)

Dearest Friend will be performed on Sunday and Monday, February 14 and 15, 2016 at 8:00 p.m. (Check their site, below, for all the pertinent deets.) I hate to leave Mr. X on Valentine’s Day night, but he can’t make this one, and I don’t want to miss it. (And we’re romantic every night, so being apart for a few hours on this one is really no big deal.) So going by the reality that “Valentines” can also be friends you care about, I’ll be at this show with my co-writer, Alice, again. I just hope those letters aren’t too mushy!

Hope to see you there!