Trending
You are at:Home»THEATRE»THEATRE:STOMP
By Karen Salkin on January 28, 2010 · THEATRE

Yes, you read that right–Stomp is back for the gazillionth go-round! And still going strong. It’s a hard show to explain to people who haven’t seen it, (yes–there are still some of those in existence,) but I’ll try. 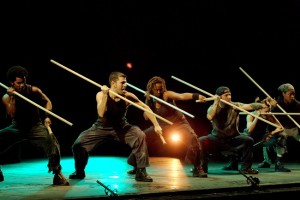 It’s eight performers who tap-dance and play percussion. On everything! From using their hands to tearing up newspapers to going through garbage to pounding on giant drums. At the end of the hour and a half performance, my friend asked if I would classify the eight as dancers or drummers. My answer is both. Drumming and tapping often go hand-in-hand.

The ads promised “surprises.” There did appear to be two new numbers, but the only surprise to me is that these performers must be the most in-shape people on earth, and hardly any of them looked it! I don’t see how someone can do this intense physical work-out eight times a week and still have a pot-belly! What hope is there for the rest of us then?

Looks aside, everyone is truly talented. This is one job you can’t phone in. And the producers can’t hire a talentless friend, (as so often happens in this biz,) or someone they want to “get with,” or any of that nonsense. I’ve seen the show now with three or four different casts, and I’m always amazed that there are more than eight people in the world who can do this! (Many more, in fact–the show is performed in multiple cities at the same time.)

Here are some random thoughts I had on opening night:

On the positive side:

It’s incredible how percussionists can find a beat in anything, including the kitchen sink. I may not be able to wash dishes after seeing this show. (In truth, I never did before. Kind-of like the “Doc, will he be able to play the piano…” joke.)

What bras are these girls wearing that hold them in so well? I seriously need a case of them!

What a diverse cast, both in looks and ethnicities. The world should follow suit.

Just like Mr. X and I can fight about anything, these peeps can sure make noise out of anything. And do!

I’m not into the silly humor in the show, but the rest of the audience sure loved it. It really adds to the over-all appeal for most.

On the slightly negative side:

Don’t sit close to the stage if you’re allergic to dust/talcum powder, or don’t want any water to get on you.

If you sit even a little on the side, the lights that are placed low-ish on the sides of the stage are really blinding. There were at least two numbers during which I had to shield my eyes, therefore missing all the fancy footwork.

They added one of the guys coughing to the newspaper number, which seemed to make everyone uncomfortable. My friend and I were both appalled. With everyone so worried about swine flu and the like, to watch a guy cough repeatedly without covering his mouth was not only not funny, it was downright nauseating!

The show got a tad tedious and repetitive for me for this time. But that my have well been because I was anxious to get home and write about it!

Over-all, Stomp has held up over the more-than-a-dozen years it has been in existence. And I feel that no theatre education is complete without seeing it.