Trending
You are at:Home»MUSIC»THEATRE/MUSIC: THE LOST FINGERS AT THEATRE RAYMOND KABBAZ
By Karen Salkin on September 22, 2014 · MUSIC, THEATRE

No, this column isn’t about that golfer who just had a phalange mishap with a chain saw! It’s a review of a fun jazz combo that just played the delightful Theatre Raymond Kabbaz in Rancho Park the other night.

They opened the theatre’s season, which kicked-off with a lovely outdoor fete. More on that in a sec. 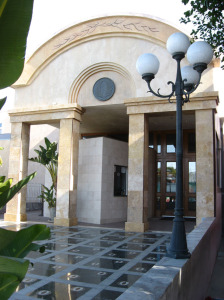 First, a word on the theatre itself, since I had never been there. The funny thing is, it’s right down the block from my dentist!!! When I had to choose a new dentist several years ago, my insurance company sent me a list of acceptable ones. I was so excited when I saw this one on the list because I had driven by this neighborhood building many times, and was attracted to it. Why would I be attracted to a dentist’s office, you might ask? Because on it, he has his name written out…in toothpaste! Coming out of a giant tube!

So, I hope the theatre forgives me for having missed their low-key design in the face of my dentist’s pink, and toothpasted, building.

Friday night was my first visit to Theatre Raymond Kabbaz. I’m an idiot who didn’t realize that the name is French; because the last word reminded me of “kibbutz,” I had erroneously always thought it to be a Yiddish theatre! So, I was pleasantly surprised to hear tons of French accents amount the personnel and audience members. [Note #1: There’s nothing wrong with Yiddish theatre; I just do enough of that at home!] [Note #2: How could I have been so dumb—it’s basically attached to L.A.’s famous French school, the one that Jodie Foster graduated from! Shouldn’t that have given me a clue?!] 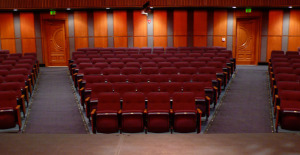 Interior, from the stage. Photo courtesy of Theatre Raymond Kabbaz.

This is a perfect theatre! I’m upset with myself for not having gone there before, in all these years! It’s big enough, yet somehow intimate. The acoustics are great, the seats are roomy (though, if you wear micro-mini dresses, like I’m wont to do, bring something to put on the bit scratchy material seats,) the sightlines couldn’t be better, and…there’s a sky on the ceiling!

The music act itself was great, but I have to go in order of this fabulous evening. I’ll get to them in a minute.

We entered through an almost “Joe sent me” side passageway, which brought us to a substantial outdoor area, adjacent to the theatre. Because this was the season opener, the audience members were treated to a pre-show reception, catered by Soleil Westwood. I’d been to that eatery before, but I don’t remember their food being as delish as it was here, so I’d better pay them another visit! 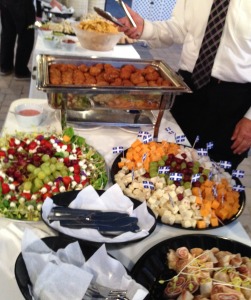 The buffet. Do you see those gorgeous croquettes in the hot tray? Photo by Karen Salkin.

There was a bar, and two food tables set-up under canopies. All the food was fun and excellent, (including ham and vegetarian tea sandwiches, cheese and crackers, delicious guacamole, and fruit,) but I almost knocked the rest of the guests over when I saw the—wait for it–chicken croquettes!!! That’s been my absolute favorite food on earth, since I was a little girl! And I can never find them anyplace anymore, though I have searched almost every diner in New York and New Jersey for them ever since! (And Rhode Island and Pennsylvania. But who’s counting?) And Soleil’s were wonderful! I could have eaten the whole panful, and nothing else, and been delirious with joy!

With everyone adequately satiated, we moved into the perfect theatre itself. I would have been happy sitting in literally any seat there; it was that comfortable!

After a few greetings from the organizers, the show got started.

A picture I snuck, to show you how fabulous it all looked on-stage. The guest musician is being blocked by the one on the right, so, my apologies to him. Photo by Karen Salkin.

The Lost Fingers is a “gypsy jazz” group, consisting of three male musicians and a female singer, who reminded my friend of Jessica Rabbit in her long, tight dress, and flowing hair. What a great compliment!

The Canadian quartet (from Quebec) was excellent themselves, but, on this night, they were joined by special guest John Jorgenson, who really rounded-out their sound with several different instruments. What a wonderful group of talented musicans they all are!!! Very impressive.

It was all great fun! The best way to describe it is “happy music.” I probably lost all the weight I had gained at the party, (from the multiple chicken croquettes,) by bouncing in my seat to the music! 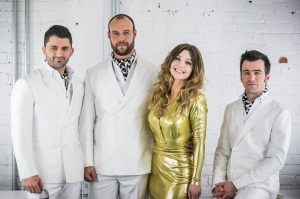 The Lost Fingers. (You should research why they chose that name. It’s an interesting story.) Photo by Charles Mercier of Hardiesses Productions.

Before the show, (after I did research on the group,) I had told my friend that the style of The Lost Fingers reminded me of the ditties that are played in the “French cafe” skit on Saturday Night Live, which she understood right away, or the movie The Triplets of Belleville. And guess what—they played the latter that night! So, I guess that’s exactly the kind of music it is!!! I love when I’m right!

They also performed many well-known songs, like Michael Jackson’s Billie Jean, and even Daft Punk’s Get Lucky, in the gypsy jazz style, which was really interesting. I never would have conceived of doing that!

I was so happy to finally be in a “bopping” audience!!! Most of the ones that I’ve been a part of are made-up of people who just sit there during music, without moving a muscle. I’m always afraid they’re going to get my can’t-keep-from-moving self kicked-out, for disturbing their peace. But, this crew at the Raymond Kabbaz couldn’t sit still themselves! It was great, and made for a real communal feeling.

So, all in all, I highly recommend this group, this theatre, and, of course, the food!!!

Please note: Theatre Raymond Kabbaz features one-night-only acts, so my reviews of the shows themselves will always be too late for you to also enjoy the experience. But, you can always check-out these performers elsewhere; many, like the Lost Fingers, actually perform around the world.

The best thing to do, so you don’t miss any other potentially great shows at this wonderful theatre, is to go to the theatre’s website (link below) and see what’s coming next. I know that I can’t wait to see Lux Aeterna: Duet + Eponym, which is billed as “Athletic Dance & Contemporary Circus Theatre.” How right up my alley is that?!

I hope it’s up yours, as well, and that I’ll see you there at the end of October. And maybe we can even go for some chicken croquettes after!