This music-and-song-only, (no dialogue,) fifty-two minute show, is definitely worth seeing, even if experimental theatre is not exactly your cup of tea. It’s not mine, but I so appreciate all the effort that went into it. And I was never bored. My friend, Roz, absolutely loved it. (And she knows music.) 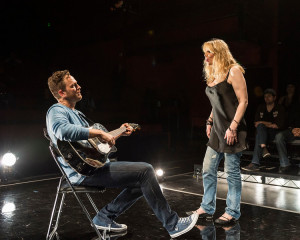 You know that I never tell you the plot of shows, but, if you’re anything like me, (and therefore can’t understand when things aren’t totally spelled out,) Kansas City Choir Boy may require a bit of explanation. The official description is that it “tells of lovers in small town America who become separated when the woman decides to travel to New York City in search of her destiny, and then she disappears.” It’s told in flashbacks. And that’s all you need to know.

Other than that Courtney Love is the female in it. Whether you’re a fan or not, I would think that seeing her so up-close and personal (the Kirk Douglas is a very intimate theatre) would be a major attraction.

Courtney may be the carrot to get audiences though the doors, but the show really belongs to Todd Almond, who wrote the show and music, and is the male star. He’s on stage just about the entire time. He’s cute, too, in a very Blake Shelton way. And I’m not kidding—I loved his casual wardrobe. (I probably would have dated him in college. Or at least hung-out with him a lot.) 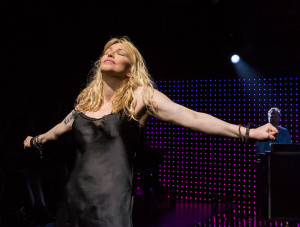 I’m not going to lie—curiosity about Love is what got me there, as well. I’m really not familiar with her at all, except for the bits of gossip I’ve read over the years. I’ve seen her only in still photos. That was all I knew going in; I had not many pre-conceived notions about her. So, I was pleasantly surprised to see that she looks a zillion times better than I expected.  I just hated her shoes.

I had forgotten that she was a singer with a band, (or maybe still is.) She sounds like the love child of Cher and Miley Cyrus. (There’s no judgment on that; it’s just whom her voice reminds me of. And at least one of them can sing.)

[Note: In a show biz coincidence, as I was writing this review, an invitation popped-up, invited me to a screening of a documentary about Courtney’s late husband, (and the reason she’s famous to begin with,) Kurt Cobain! How can I not go see it now?!]

I must admit that I didn’t see any levels in Courtney’s performance. She had a far-away pained look on her face the entire time, which just added to my confusion about the story. And the uncomfortable way she held her hands for the whole show made me keep checking to make sure that my own bracelets weren’t going to slip off. 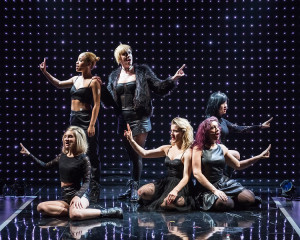 The “Sirens.” Photo by Craig Schwartz.

But on the plus side of the whole shebang, I really enjoyed all the Todd Almond-composed music, (which is strange for me because I have such exact tastes, and EDM is definitely not one of them, but that was just a small part of this show’s repertoire); I absolutely loved the live musicians, (especially the cellist); and the sextet chorus (labeled “Sirens” in the program) were all excellent singers, and wore fabulous varied black outfits, put together by costume designer Paul Carey. (Perhaps Courtney should have borrowed their footwear! Actually, no maybe about it!) (By the way–The best outfit was on the female violinist.) And, for you celeb-lovers, the audience gets to see a pretty famous, (if not exactly for the right reasons,) celebrity perform right in front of you!

Speaking of sight-lines, let me tell you about the configuration of the Kirk Douglas Theatre for this run. In addition to the usual audience seats, there are risers on both sides of the stage with more seating, which is where I sat. The pros and cons of that area are thus: Cons–the chairs are uber-uncomfortable (especially if you have back issues, as I do,) and you’re not in front of the action. Pros–you see much more of it, and from interesting angles.  You can practically see down their throats when they sing! (And when else in life will you get to see a half-naked rock star so close you could literally touch her if you were insane?!) 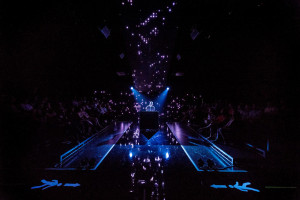 The whole crew, including director Kevin Newbury and choreographer Sam Pinkleton, worked to make the most of each moment and of each square inch in the tiny space the stage occupied. There were many clever special effects, and even small changes in wardrobe depicted something different. Just the donning of a hoodie gave us another piece of the puzzle.

The main take-away for me is that Todd Almond is a talented guy. His singing is good, and some of his music reminded me of the stuff I listened to in my favorite college, (of the four I attended—don’t ask,) which is a good thing.  No—a great thing! 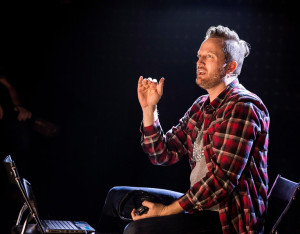 And in my continuing campaign to encourage audiences to always read every inch of the programs, (which I do after I see a show—I want to experience everything free from pre-conceived notions, and then learn more after the fact,) I have to say that the “note from the author,” at the top of the Who’s Who page in this one. was eye-opening. That one simple paragraph from Todd Almond explained everything, and made me want to see Kansas City Choir Boy one more time.

One interesting, if shallow, note is my thoughts on seeing Courtney’s half-naked body so close-up. (I have a feeling no other reviewers will give you this perspective on the show! Duh.) I think that people, including me, think of such famous people as practically wax figures, without even real skin. So, seeing that her body has the same assets and issues as women at the gym and the pool was sort-of comforting, to say the least.

For all the above reasons, if you’re anywhere near Los Angeles, and have an hour to spare, I really suggest you go see Kansas City Choir Boy at the Kirk Douglas in Culver City. Why not?! [Note: The show was already in New York earlier this year, so perhaps it will travel around after this run.]

One thing I love about openings at this theatre is they always have very easy-going after-show receptions, and everyone is invited! No political baloney involved. This fete was one of their best ever. It was catered by Wildcraft, which is just next door. The food was so delish, it made me wish I was still the restaurant critic for the Culver City News! I’m sure I’d give them an excellent critique. (That was a great gig, but with the continued success of INAM, I don’t have much time for many outside jobs any more. Nice conundrum to have, don’t you think?) They served two kinds of pizza, a very different chocolate-and-nut “pudding,” an apple and pumpkin concoction, pear and burrata on flatbreads, and my surprise fave—fried mushroom balls. I’m still craving those last ones!

My favorite part of the whole night was at the end—everyone left the theatre smiling! A production can’t ask for more than that.