Trending
You are at:Home»THEATRE»THEATRE/MUSIC: FREESTYLE LOVE SUPREME
By Karen Salkin on July 18, 2022 · THEATRE

Before I review this wonderfully different stage presentation, I must first laud the Pasadena Playhouse for being an unbelievably eclectic theatre. The two most recent previous productions at this State Theatre of California were a one-woman show of seventy-nine-year-old Holland Taylor portraying former Texas Governor, Ann Richards, followed by a new translation of Chekhov’s Uncle Vanya! And now they give us improvisational hip-hip rapping. Major props to them for always surprising us. 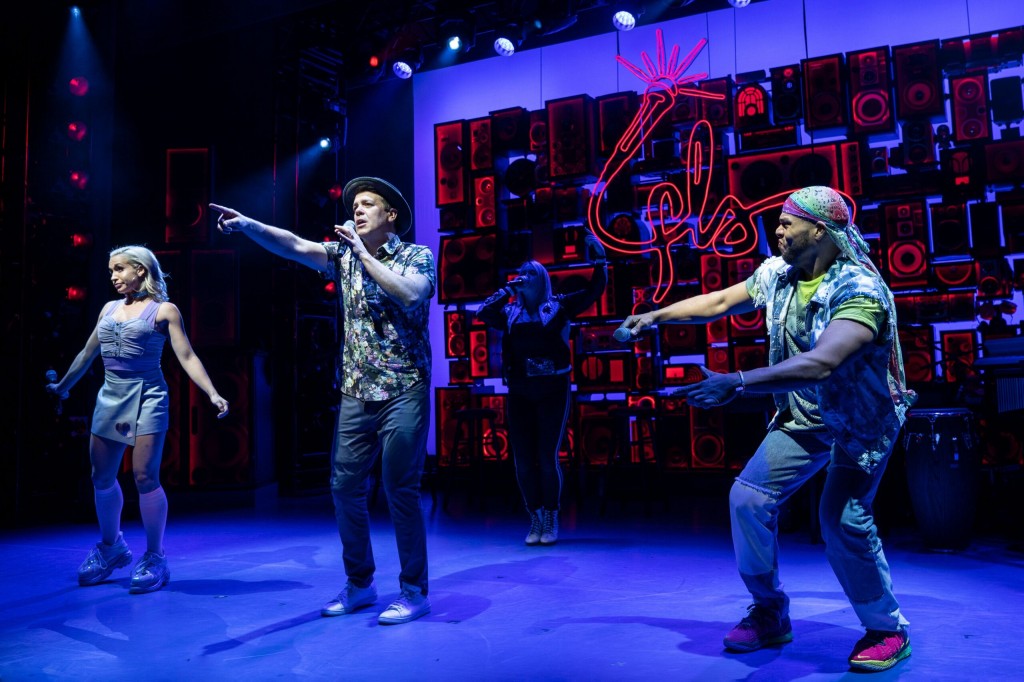 (L-R) Morgan Reilly, Anthony Veneziale, Kaila Mullady, (in the back,) and Jay C. Ellis. Photo by Joan Marcus, as is the one at the top of this review.

Now let’s discuss Freestyle Love Supreme. I love being part of an appreciative audience, and the opening night one was definitely that. They whooped and hollered just about every second. I agree with that total enjoyment, while my friend Laura said it’s the best show she’s ever seen! And she is far from a hip-hopper.

It’s hard to describe exactly what Freestyle Love Supreme is, but basically it’s improv done in all rap music. Ninety-eight percent is hilarious, with one mainly serious part, (which is, shockingly, the number I appreciated most,) making-up the other two percent. But, since the raps are all improvised, every single performance is different. I’m sure they’re all fabulous, though; people have been raving about this production since before it even arrived on Broadway, of all places, almost three years ago. If I had the time and funds, I would go back every night just to see what the user-talented cast comes up with!

On top of the new audience suggestions each time out, the cast changes a bit over the course of the run. There’s a core crew, but special guests often show up, as Wayne Brady did on opening night. (I think he does quite often.) But I wonder how that mélange is even possible. How do they find several people who can rap improvisationally? It’s beyond hard to do. I did improv for years, and was a dancer, so I have rhythm, and I hear constant hip-hop music because of my krump-dancing bae, Oldz Kool. But without a doubt, there is absolutely no way I could improvise in rap!!! And for a couple of hours in a row! Hardly anyone can! It’s such a specific art. You’ll be amazed when you see Freestyle Love Supreme, which I’m recommending almost everyone do. [Note: I’ll list the exceptions near the bottom of this review.]

What these talented people accomplish is soooooooo much harder than basic improv. I can’t even imagine. 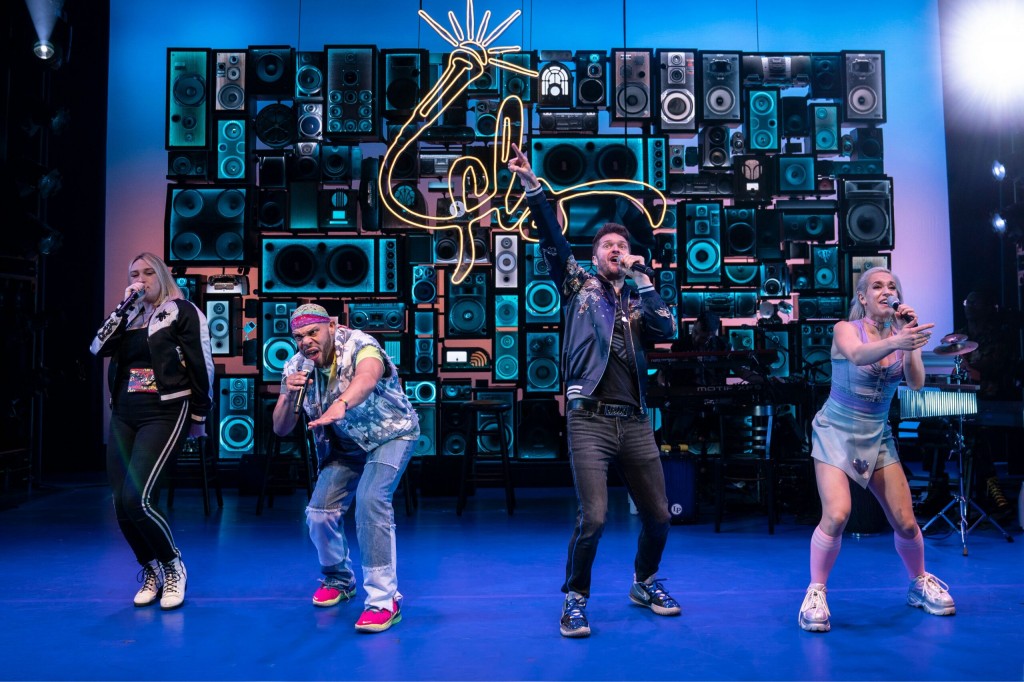 As with all improv groups, they have pre-ordained set-ups, (such as giving an audience member a second chance to correct a bad experience they had, and reliving the entire day of another person there.) But the information and suggested words are all new to them each time, and the cast’s cleverness in coming up with the raps about it all is a marvel to behold. And they do it for almost two hours at a time! (I honestly don’t know how long the show actually is—opening night was the first time in history that I didn’t check the time even once!!!)

The proceedings are led by an incredible host, Anthony Veneziale, who came up with the concept to begin with, and then went on to create it with Lin-Manuel Miranda and Thomas Kail, who directed it. (The story of its history is really interesting, so if you have a minute, you should research it.) Anthony is perfect for the gig. On top of keeping it all going and being very funny in his interactions with the audience without bordering on obnoxious, (as so many people with his talent can be,) his story in the emotional segment of the show I’m going to tell you about next choked me up. [Note: I thought that in that particular rap, he said he had just six more performances left, which would be a shame for all of you who can’t see it this week. I really hope that either he meant or said six more weeks, or that I somehow totally misunderstood what I heard. But just in case, I implore you to see Freestyle Love Supreme at the Pasadena Playhouse asap!!!] 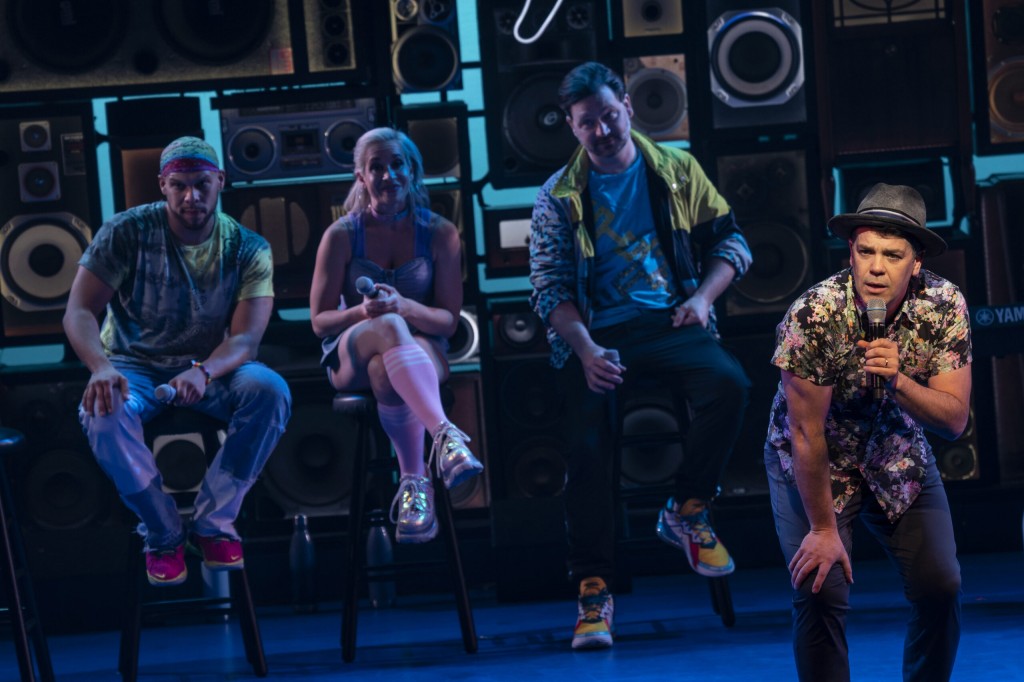 That pathos section acts as a sort-of “confessional” for the quartet of performers who rap about something serious in their private lives, knowing all the while they have to bring their tale back to the silly word the audience comes up with. That whole number was especially powerful. I’d love to sneak in for just that part (near the end) every night. Each of the four participants even seemed surprised by the stories of the other three.

On a side note, guest cast member Wayne Brady is so multi-talented! I’ve always known about, and loved, his singing, (including as the rightful winner of Season 2 of The Masked Singer–don’t judge, either one of us!,) but I had no idea he could rap! And Laura thought he was only a game show host! She didn’t even know about him being on an improv TV series for years now. (And, on a side note to my side note, he looked great in his jeans on stage, too. Who knew he was such a babe?!)

Now here’s my list of who should not see Freestyle Love Supreme: Perhaps some older folks, and everyone who eschews all things rap. Also anyone who doesn’t love loud live music. And people who have trouble making-out words from music, as I often do. (I understood only about two-thirds of the words. But that was actually enough—I still enjoyed plenty of laughs.)

And definitely not kids! There were several in the audience on opening night, and mom-of-two Laura and I were both cringing when the performers did bits with the audience-suggested words “fornication” and “edibles.” As a former elementary school teacher, I can tell you that’s not appropriate. I say let kids be kids as long as they can; they’ll have to deal with the world soon enough and for the rest of their lives. (Wayne Brady even had the good judgment to rap to a kid in the front row to tell him not to do drugs after he had just done an astonishing one of those confessionals about the only time he had done them himself!!!) 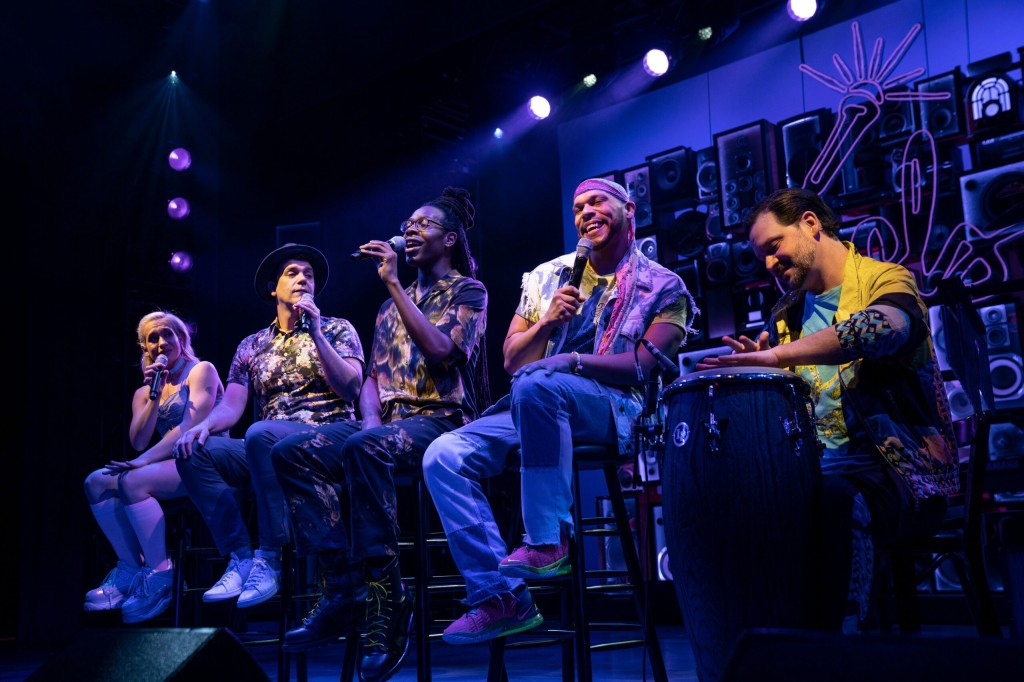 At the same time, I was quite surprised that the suggestions of the audience were very similar to those of pre-pubescent boys playing Mad Libs. Back in the day, I often brought that old-fashioned pad game to my trio of little kid friends in Rhode Island, when they were five-to-eleven-years-old, and just about every verb they chose to fill in the blanks with was “penis,” “poop,” “peepee,” and their absolute favorite, “butt.” I haven’t heard a group of words like that since those long-ago days. Until the Freestyle Love Supreme opening night! It wasn’t a problem, at all; I actually enjoyed the blast from the past. I was just very surprised that so many grown-ups couldn’t think on a higher level.

As much as I loved this entire presentation, I could have easily spent the time just listening to Wayne Brady and Aneesa Folds sing, which they hardly got to do because the music is rap, not singing. I’ve always loved Wayne’s voice, and Aneesa’s was a revelation. Someone needs to revive Dreamgirls pronto, just so I can hear her sing And I Am Telling You I’m Not Going, which I have a feeling she’d absolutely slay.

As in every theatre the world over, taking photos and videos is not allowed, (even though d-bag cheaters who think they’re above everybody else in the world continue to do so.) But this production lets the audience take pix at the end, and even gives them the heads-up of when to take their phones, (er—cameras,) out! How nice is that?!

And you will most likely want to immortalize the moment. Seeing Freestyle Love Supreme is one of those happy memories you’ll want to call on when you need a smile on your face.