I really think that knowing I was going to get to see this new ballet at the Ahmanson Theatre was the carrot that I needed to try to heal from my recent hand surgeries. I wasn’t going to let anything prevent me from seeing a new Matthew Bourne stunner!

For those of you who are unfamiliar with that name, Matthew Bourne is the most incredible, creative, inventive choreographer ever! This Englishman’s mind works like few others, especially of his generation. I’ve seen several other re-imagined works of his, beginning with his version of Swan Lake with a guy, the brilliant Adam Cooper, as the Swan, which left my mouth hanging open. I’ve been to more dance productions in my life than most other people have, but I’ve never witnessed anything that can compare with Mr. Bourne’s creations.

And his subsequent productions did not let me down, as most people’s follow-up endeavors often do. There was Cinderella, Car Man, Nutcracker!, Play Without Words, and Edward Scissorhands, each one different from the one before, but equally spectacular. 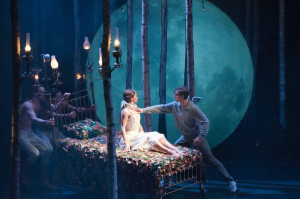 Now comes Sleeping Beauty, complete with Tchaikovsky’s original score, which Matthew reinvented as “a Gothic romance.” I must be honest and say that for just a couple of small reasons, such as lack of bright colors that I crave, it was my least favorite of Matthew Bourne productions, but even the (air quotes) worst of his is better than the best of anybody else! 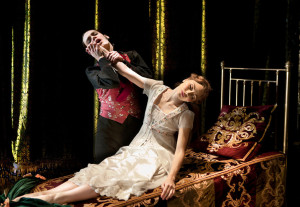 Sleeping Beauty is still fabulous and ingenious; I just needed more light and color. And several of the surprises attendant in every Matthew Bourne production were a little dark for me this time, in more than just the lighting and costumes. But just as the true love awakens the Princess with a kiss, Matthew Bourne awakens the love of dance in his audience, with everything he does, so I still recommend that everyone see this ballet, and quickly because it’s here through only December 1. (But make sure to read the Director’s Note in the program if you want to know his raison d’etre for the creative liberties he took with this classic tale. It’s very interesting.) (And if you’re like me, who wants to see every eyelash movement, choose tickets that are close enough, or at least, the first row of the mezzanine, which has a totally non-obstructed view.)

There was one invention that stunned me, in a great way, and, judging from the audience reaction, everybody else, as well. They showed the baby Princess Aurora by having unseen puppeteers work a baby doll. It was perhaps the most brilliant creation ever to be seen on the stage anywhere. A collective gasp was heard when she first “crawled” on stage, and then appreciative chuckles. But when she kept going, and her movement kept getting increasingly intricate, I think all our mouths were hanging open during that entire first act; I know mine was. I could barely watch the other dancers.

And the second act, (of which there are four; two on each side of the intermission,) is done as a garden party, with most everyone in cream-colored attire and the Princess in white. That scene is classic Matthew Bourne, and I loved it! At some point, when the music stopped, we got a tableau of a beautiful giant oil painting. That’s Matthew Bourne for you; even his still moments are something to marvel at. 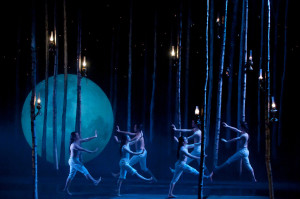 Usually I single out one or two of the dancers as my favorite, but the way this ballet was configured made it really more of a group effort; there was really no “star” per se, even with the Princess as the title role. And every dancer was perfect. (As were the staging and actual choreography, with many steps and combinations the likes of which I’ve never seen before, in my almost whole life of association with all things dance.)

I am happy to report that Mr. X came with me semi-voluntarily; he respects dance because he knows that dancers work harder than just about anyone else in the arts. And he was majorly impressed with it all, especially the “remarkable fluidity” of the choreography. On the way home, he spoke of the whole production in glowing terms, with so many beautifully-worded points that I can’t remember them all now. Let’s just leave it at that if he were to write a review, his verbiage would be on a much higher level than mine.

Kind-of like how Matthew Bourne’s productions are on a much higher level than just about everyone else’s. If his ballets had been around when I was growing up a dancer, I would have done everything in my power to not let my knee injuries deter me from ballet as a career. That’s how passionate I am about his body of work.

And we in Los Angeles are really privileged to have the opportunity to see his work. So if you’re in the city, or anywhere near it, please do yourself a favor and get to the Ahmanson Theatre before Matthew Bourne’s Sleeping Beauty is gone. Just remember that this time Sleeping Beauty is a Gothic tale, and don’t be disappointed when it’s not the Disney version. There’s a place in all of our lives for all renderings, for which both the child and grown-up in me are very grateful.