Trending
You are at:Home»CHILDREN»THEATRE/CHILDREN: A CINDERELLA CHRISTMAS
By Karen Salkin on December 12, 2016 · CHILDREN, THEATRE

The annual Christmas Panto at the Pasadena Playhouse is the only show all year that I don’t have to beg Mr. X to accompany me to! As a great judge of theatre and comedy, he goes willingly. How’s that for a ringing endorsement?! 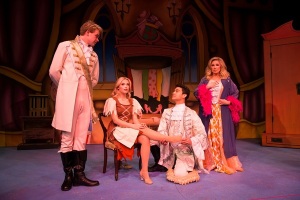 (L- R) Kenton Duty, Davi Santos, LaurenTaylor, and Morgan Fairchild. Photo by Philicia Endelman, as is the big one at the top of the page.

He knows, as does everyone who’s ever seen a panto, that what’s in store for him there is nothing but pure fun. He gets into the celebration as much as anyone who is lucky enough to have this holiday theatre opportunity.

This year’s offering is the Cinderella story, but before I get to singing this particular panto’s praises, here’s a brief refresher course on just what a “panto” is. Its formal moniker is “pantomime,” but trust me–it is far from what we Americans recognize as that art form. It’s a British tradition which is usually performed around the holidays. Each show is based on a well-known fairy tale, but the story is changed-up a bit, most often with Christmas being a part of it.  There’s are a lot of “rules” of what it should include, chief among them being singing, (of current pop songs along with some classics,) dancing, slapstick comedy, silly double entendres, (for the grown-ups in the audience, of which there are many,) a male actor obviously playing a woman, and lots of audience participation, often to loudly boo the villain.  And the audience always has a blast, as we all did on the recent opening night of A Cinderella Christmas. 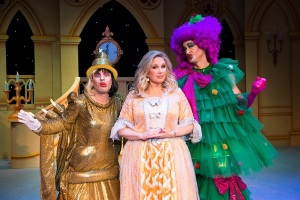 We were especially thrilled to see nutty comic actor Ben Giroux back, after taking last year off from the Pasadena Playhouse’s series of pantos. Mr. X said that Ben “brings a real spark to the show” in his role as one of the evil step-sisters, alongside Josh Adamson, who is a revelation here. They both perform their schtick with boundless energy and enthusiasm, and appear to be loving their roles as much as the audience does! If the show was just those two, I’d be fine with that.

Some of their clever colorful costumes, designed by Albermarle, (great name, by the way,) made us all guffaw before the duo even opened their mouths! The Christmas tree dress was the best. You just know I was trying to figure-out how to make one for myself! (Yeah, myself, good luck with that.) 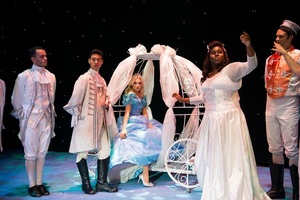 Usually with pantos, there is one male playing a female, but, in this case, we are treated to three of those special performances; the above mentioned duo of sisters, and the Fairy Godmother, too.  She’s played by Alex Newell of Glee Fame. (His gender-bending character, Unique, quickly became a fan favorite beginning in Season Three.) Mr. X admired Alex’s “stratospheric vocals” in A Cinderella Christmas, and the assemblage went wild for him. The opening night audience was screaming for him from the get-go. I guess they were more knowledgeable than I this time because I did not even realize that the Godmother was Alex until the end of the first act, when writer Kris Lythgoe cleverly threw-in a Glee reference. [Note: I rarely read my theatre program until after a show, but this is one time I wish I had done so at the outset. I would have discovered that Alex had opened for the amazing Adam Lambert on his tour recently. Then, after the show, Alex and I could have discussed Adam, whom I’ve known, and been a huge fan of, since waaay before American Idol! That tour must have been some musical spectacle—Adam and Alex! Wow. I imagine there was a lot of eyeglasses-shattering on that one!]

Another pleasant surprise in A Cinderella Christmas was Morgan Fairchild as the evil stepmother. Who knew she was so fun?! I was happy to see that she still possesses the most stunning eyes in show business! Those bright blue peepers read all the way to the back of the room. 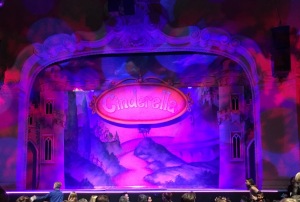 The stage before the show begins. Photo by Karen Salkin.

A highlight of all the pantos at the Pasadena Playhouse is having a few children (who have procured a “Golden Ticket,” details of which are on their website, below) come up on-stage to participate in a sing-along. They are also briefly interviewed by the character who serves as our “host” along the way. In this case, it is Cinderella’s best friend, “Buttons.” (Don’t worry if you’ve never heard of him before—he’s not in the real Cinderella tale.) He is charmingly portrayed by tall-drink-of-water Matthew Patrick Davis, whose likeness to Jim Carrey is played-up a time or two in the show. He’s a theatre natural. As he chats with each kid, he asks them who their favorite character in the show is, making it comically obvious that he hopes they each choose him. So, as we left the theatre, I asked Mr. X who his fave was, and without hesitation, and not jokingly, he answered, “Buttons!” He added, “Matthew deserves a lot of credit for bringing a warmth and a sweetness to the show.” He really loved that guy!

And you know that I loved the colorful sets, designed by Ian Wilson. I want to hang-out in that lush green forest for awhile. 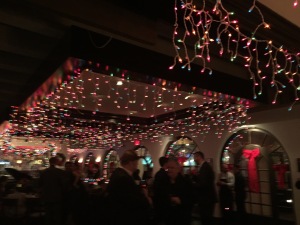 There were so many holiday lights in redwhite+bluezz that I could not get them all in focus! Photo by Karen Salkin.

Speaking of hanging-out, since it was opening night, we got to do just that at the fabulous post-show party! It was held in the adjacent eatery, redwhite+bluezz, where so many of the Playhouses’ best fetes are, with always-fabulous food.  As soon as we entered, we were treated to delicious fried potsticker hors d’oeuvres. (My waistline was lucky that I was too busy mingling to have more than two of them, because I could have eaten dozens! They were that delicious!) Those were followed by the wonderful Christmas dinner buffet, which went along with the holiday theme.  There was turkey, mashed potatoes, garlic string beans, and a mac ’n cheese that even Mr. X raved about. For dessert, we had holiday treats like mini cupcakes and flavorful little lemon and coconut-chocolate chip squares.  It was all served in a beautifully festive atmosphere, adorned with lots of holiday lights, the presence of which made it extra warm and cozy in there. 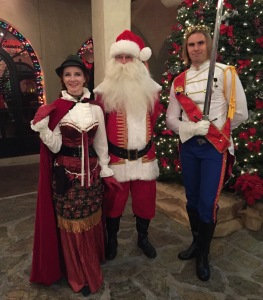 Some of the characters in the Winter Wonderland. Photo by Karen Salkin.

I was also happy for the opportunity to hang-out with my old pal, Michael Orland, (the musical director of this show, and so many others,) who is one of the good guys in show business. He truly deserves all the success he’s had over the past decade or so. (And I thank him for introducing us to Alex Newell, with whom I could have continued discussing shoes for another hour or two!)

Speaking of people who deserve good things, everyone in LA who has been “nice” all year deserves to see this show, children and grown-ups alike. If that includes you and yours, make sure to get there a bit early, to spend some time in the Winter Wonderland in the front courtyard. You might even spy Santa!