Trending
You are at:Home»THEATRE»THEATRE: BENGAL TIGER, SUGAR HAPPENS
By Karen Salkin on May 26, 2010 · THEATRE

BENGAL TIGER AT THE BAGHDAD ZOO

So, all I can tell you about Bengal Tiger At The Baghdad Zoo is that I had a good enough time seeing it. And that I was happy to see the cute and talented Ben McKenzie in the lobby at intermission on opening night at the Mark Taper Forum. A bit more about him in a second, but first to the play itself.

It had played at Culver City’s Kirk Douglas Theatre last year, but I missed it because I just really don’t love plays about war. I hadn’t realized that this one had lots of humor between the pain. 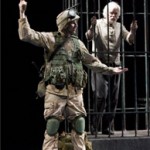 I can’t describe this 2010 Pulitzer Prize Finalist for Drama as well as the press release, so this is what it says:
“Now enhanced for the Taper stage, this remarkable play throws two homesick soldiers, a tormented Iraqi and a brooding tiger together into a revelatory situation that is both hysterical and macabre, soul-wrenching and lyrical.
Directed by Tony-nominee Moisés Kaufman (Broadway sensations I Am My Own Wife and 33 Variations), this production dares you not to look away from its honest and hauntingly theatrical depiction of the aftermath of war.”

Shows like this always make me ponder where all these intellectual types in the audience come from; I was among the smartest in elementary school, then still one of the brightest after that, and my parents constantly supplied me with culture, yet I don’t enjoy plays that make me think a lot. So, if I was the smartest, where do all these people who enjoy this type of entertainment come from? (I always think that at classical concerts, too.)

Speaking of how shallow I am, here’s my Ben McKenzie story. I sat next to him once before at this theatre, at a play written by his uncle, as it turned-out. His lovely mother was passing a candy bar to Ben and his little bro, and she must have seen me sneaking a peek at him. So, she said, “Ben, honey, give the girls some candy.” I was thrilled and mortified at the same time! But I happily accepted, more to receive it from him than for the actual candy, though it’s now become my favorite Music Center snack.

I didn’t see him at the after-party at downtown newcomer Casa, but it was so dark that I didn’t really see anybody! But there, and at the theatre, it appeared that a good time was had by all and more than that an audience can’t ask for.

SUGAR HAPPENS: A ONE GIRL SHOW

I met an interesting director the other night, Phil Ramuno, at the opening of his show, Sugar Happens. My pal who introduced us thought that perhaps we had worked together because he’s directed mainly sitcoms, and even co-authored the Sitcom Career Book. (As it turned-out, I had once read for, and won, a part on one of his sitcoms, but at the last minute, they couldn’t fit the guest-starring role into their budget! That’s show biz!) He recently returned from helping comedy-challenged countries, like Russia and Romania, produce sitcoms, which I find a fascinating topic, so it was fun talking to him.

I had also never even noticed the Sidewalk Studio Theatre before, even though I love this Toluca Lake area. (I guess it’s just over the borderline into Burbank.) It was tiny, but comfortable, and the set made good use of the space, in keeping with the concept of a one-person show that’s basically vignettes of a middle-aged woman (Rachel Bailit) looking back at different paths her life could have taken. And since the actress kept featuring her boobs, (I’m not saying anything bad–she’d be the first one to tell you about them!,) male patrons might like to sit up close. (There are actually only three rows, so you can most likely get a good view from any seat.)

I have to be honest and say that the show itself wasn’t my cup of tea, but also that the opening night audience did appear to be yukking it up, so it’s your call on this one.