Trending
You are at:Home»THEATRE»THEATRE: WHAT THE CONSTITUTION MEANS TO ME
By Karen Salkin on January 22, 2020 · THEATRE

WHAT THE CONSTITUTION MEANS TO ME

Okay, the holidays are well over, and the exciting theatre season has finally begun again. This is a juicy month for so many openings. And I’m glad to have started it out with an uber-intelligent show.

Of course, as often happens, I have a couple of little issues with What The Constitution Means To Me at the Mark Taper Forum, (which I’ll explain later on,) but I am totally recommending it to everyone, especially to people who could use a refresher course about this country at this critical time in our history. (Don’t even get me started.) 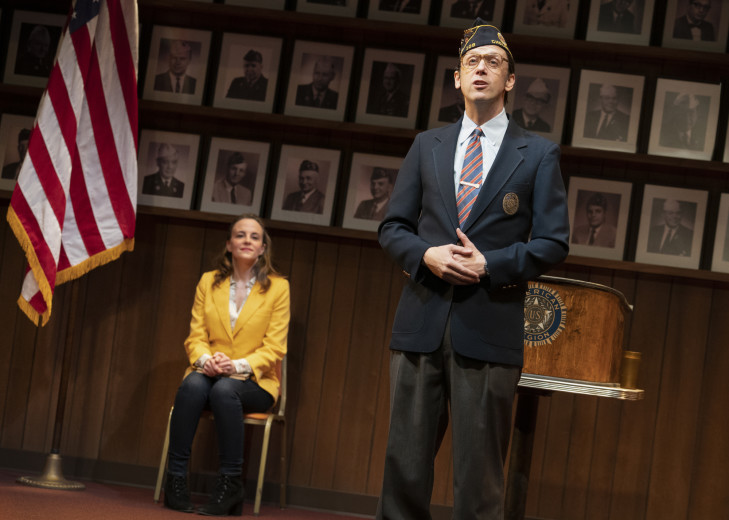 Maria Dizzia and Mike Iveson. Photo by Joan Marcus, as is the one at the top of the page. (I have no idea why this photo is so crooked, but for once, I didn’t take it!)

I can’t tell you how much I admire the writer, Heidi Schreck. I’m so in awe of someone who can create a successful, amusing, Tony-nominated, [basically] two-person* play out of…her teen-age Constitutional Competition speeches! It’s really a brilliant idea. And the execution lives up to it. *[Note: The program lists six names as making-up the cast, but it’s really just Heidi, (or, in this case, someone playing her,) and one guy. And then a young girl later on, which I’ll also get to in a minute.]

What The Constitution Means To Me is so well-written, so as to keep the audience’s attention while educating and motivating. When I saw the Tonys audience go nuts over just the mention of this play during last year’s awards, I could not imagine how someone made the study of the United States Constitution interesting and entertaining. But Heidi certainly accomplished that. With tons of humor, to boot.

The basic scenario is “Heidi” talking to the audience half of the time as her grown-up self and the other half as her teen-age self, competing in debates on the U.S. Constitution. There’s one guy on stage as the moderator from those back-in-the-day competitions, and then an extra part at the end, with a young girl.

I’m not telling you anymore about the excellent narrative because you really need to discover it for yourselves. But it did give me plenty of inspiration for the rest of this review.

A couple of audio recordings of creepy Supreme Court Justices, (such as Antonin Scalia,) might make your skin crawl, as it did mine. I can never find humor in rottenness like that—it just makes me sad and angry. But those recordings are good little surprises in what is, for the most part, a monologue.

On a side note, I had just seen Harriet that morning, so a lot of the topics in this play meant even more to me. 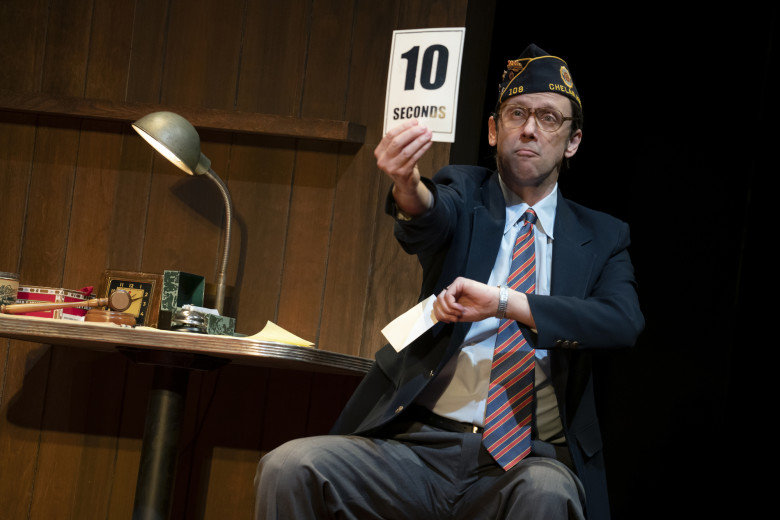 In her original teen-age speeches, Heidi and her competitors were asked to draw correlations between their own lives and what the Constitution is saying. So, in that spirit, I’m going to be doing sort-of the same thing here, telling you what in my life this play made me think of. (So, in other words, the same as I always do!) I’m sure you’re on the edge of your seats for those little anecdotes.

I feel that gaining new knowledge is always beneficial, (even though the Constitution is something all of us over twelve should already know a lot about!,) so I appreciate that in addition to being charming, What The Constitution Means To Me is educational.  Even with my 147IQ, I could not get into the subjects of American History and Government in school.  (Or now, actually.  But I did just run the category of Beauty Products on Jeopardy the other night.  Priorities, huh?)

What The Constitution Means To Me is comprised mainly of entertaining tangents, while still under the same intellectual umbrella, which I totally identify with because that’s just what I did on my former TV show. The audience waited to see if I would ever get back to my original topic, (which, knock on wood, I did more often than not. But that was then.)

But a major difference between my show and this play, (besides that the play is genius!,) is that…I can’t repeat my stories! I always felt like I would be stealing from…myself! (Actually, my yarns weren’t written; as I hope everyone will recall, my show was stream-of-consciousness.) So believe me when I tell you that I truly applaud this accomplishment, on the part of both writer and actress.

The show and I share a couple of other components. Heidi was told to make personal comparisons with the Constitution, including stories about her own family. Well, talking about my fam is exactly what I often did! (But I had no real Constitution knowledge, so therefore no comparisons. But I did have my parents as guests on my show, multiple times. I know—sort-of goony, right? But a girl’s gotta do what a girl’s gotta do. And then my viewers totally got why I’m as nutty as I am.)

Okay, my last thing in common with Heidi Schreck is that…we both have a stuffed animal bestie! As adults! I totally understood her story of “George the Monkey’s friend” because my best friend, (since a few days after I got to LA as a teen-ager, when our eyes met in a store in Westwood,) is none other than Froggy! Heidi and I even both lost those guys once, but, thank goodness, got them back. And they’ve both had body work, too. (Froggy has had several full-body make-overs, both eyes removed and re-attached, and even a tongue change!) Boy, do I love The Frogster. I can’t fall asleep without him! I feel a tad weird on planes because I have to have him on my lap at all times, but hey—it’s better than people with fake service animals, right?!

Okay, let’s get back to the actual show. But one of the things I laud it for is this–when a play can inspire you to fondly think of so many positive parts of your life, it has truly accomplished something special, even if that’s not what it set-out to do. So I thank What The Constitution Means To Me for giving me so much to hark back to. (I guess the title of this review should have been What “What The Constitution Means To Me” Means To Me!)

So, after all of that positivity, as much as I hate to say this, there are two aspects of this show that I didn’t love. 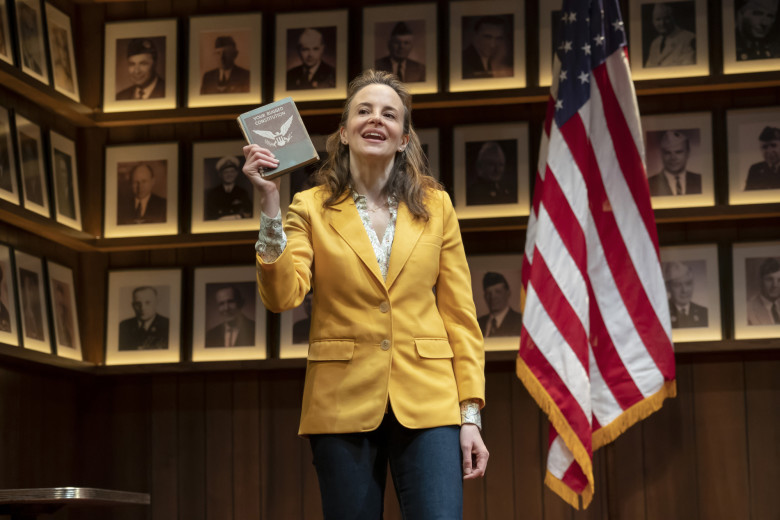 First of all, here in LA, Heidi is not doing the show herself, as she did on Broadway. But the actress who’s playing her, Maria Dizzia, (who is excellent, by the way,) says she’s Heidi when she first appears on stage, and even stands in front of the set, like she’s making a pre-show announcement. I knew Heidi isn’t in it here, so I thought she had showed-up for opening night, and was greeting us. I could not figure-out what was going on until I looked through my binoculars, and realized the woman who was talking was someone else entirely.

I don’t know how that situation can remedied, though, since that’s how the show is written. But at least my readers will realize what’s up when they see it. I’m always happy to help.  [Note: One more comparative parable from my life: When I was doing my TV show, a producer from Second City TV called me to ask for help with Andrea Martin playing…me on their show!  Of course I said no, and my agents had to threaten them. But, had I agreed to it, I think it would be confusing to people to see someone else saying she’s me! Like this is with the Heidi character.]

My one other issue with What The Constitution Means To Me is that it’s waaay too long. (Almost two hours with no intermission.) I was already thinking that twenty minutes could easily be cut, and then there were two extra parts, that, for me, are totally unnecessary, although others seemed to enjoy them to varying degrees.

The first “add-on” is a debate between now-grown-up Heidi and a real teen-ager, who is part of the show. (I saw Rosdely Ciprian who shares the role with Jocelyn Shek.) I know that I should claim to love this debate bit, especially as a former teacher who adores seeing students involved in intellectual activities voluntarily, but I have to be honest and admit that I was antsy throughout. I appreciate everything they were saying that night, but when I go to the theatre, I want to be entertained, not preached to. If I had wanted to see a constitutional debate, that’s what I would have attended. And the speed-talking they employed for that debate was too much for even me, the original motormouth. So none of that was my cup of tea. 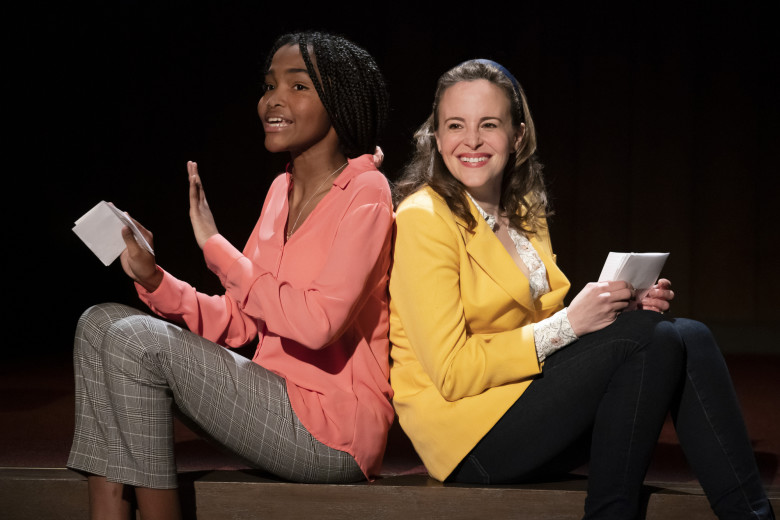 And that’s still not the end! The show is extended even longer by the two women answering questions about themselves, which I felt was enough already. I don’t even choose to see movie stars doing that after many of the industry screenings I attend, so why would I want to hear two strangers answering questions about themselves? If I’ve passed on hearing Quentin Tarantino telling me about himself, you know I have no desire to stick it out with others! (But maybe that’s just me.)

But I do love a show that gives us a gift, which What The Constitution Means To Me does towards the end. I’ll give you only one guess as to what it is. Ready? A pocket Constitution! It’s kind-of adorbs. And welcomed by us thirst-for-knowledge-ers. They said it was for us to “follow along” during the debate section, but it would have taken too long to look through it for the right page, (sort-of like at temple on Yom Kippur,) and the women were speaking way too fast. Still, I will definitely look through it at my leisure, as I hope all audience members do.

So getting that little goodie after being entertained and enlightened for a couple of hours, and then observing people engaging in very upbeat and intelligent conversation as they exited What The Constitution Means To Me made me leave the theatre on high note. I hope you’ll all have the same experience at the Taper in the next month.