Trending
You are at:Home»THEATRE»THEATRE: WEST SIDE STORY
By Karen Salkin on July 29, 2019 · THEATRE

West Side Story is Mr. X’s favorite Broadway musical of all time! So even though he’s one of those people who doesn’t like to travel far in Los Angeles, he joined me in Thousand Oaks for 5 Star Theatricals’ rendition of it, which he didn’t mind doing at all since he had loved their recent production of Shrek. (And he had such a good time there again, at the Fred Kavli Theatre, that he even came to the show’s after-party! He never does that!) 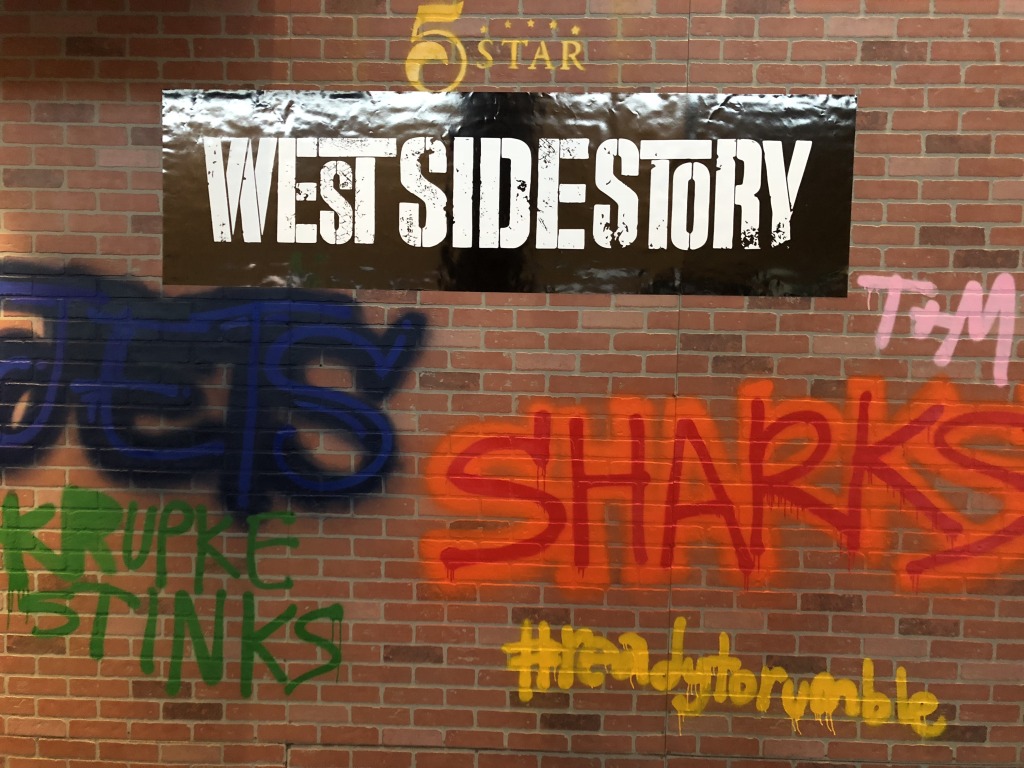 The photo op mural in the lobby of the Fred Kavli Theatre. Photo by Karen Salkin.

Very surprisingly for a lifelong theatre-goer, I had never seen a stage production of West Side Story before. Of course I’ve watched the classic film version, which I detest that Hollywood is doing a remake of. You cannot remake perfection, Steven Spielberg! (I wish that his mother, Leah, whom I met years ago because she was a fan of my show, was still around so I could tell her to scold him for me!!!) 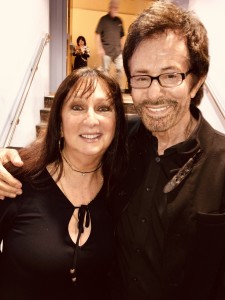 But back to this wonderful entertainment in Thousand Oaks, (which you can still see this Thursday-Sunday.) The opening night started-out with a bang when 5 Star Theatricals’Artistic Director, Patrick Cassidy, introduced the original movie’s Bernardo, Oscar-winner George Chakiris, to wild appreciation from the audience! How supportive of George to be there! I’ve known him casually for several years now, and I can attest to how darling he is. And after chatting with him for almost the entire intermission, Mr. X and I went home and re-watched all his dance scenes in the film. Wow! Just wow. (No wonder none of the males in this stage show lived up to my expectations. More on that in a bit.)

For a regional theatre company (i.e. not Broadway or a National Tour) to do West Side Story is a majorly ambitious undertaking, which is successful for the most part.  Is it exactly the Broadway quality that most of their productions are?  Not fully.  But it’s definitely a very worthwhile presentation. And everyone should see it, especially people who’ve never witnessed the story on a stage before. We SoCal peeps are fortunate to be able to get familiar with the scenario ahead of that remake coming out next year.

This is probably the most gigantic cast Five Star Theatricals has ever worked with. 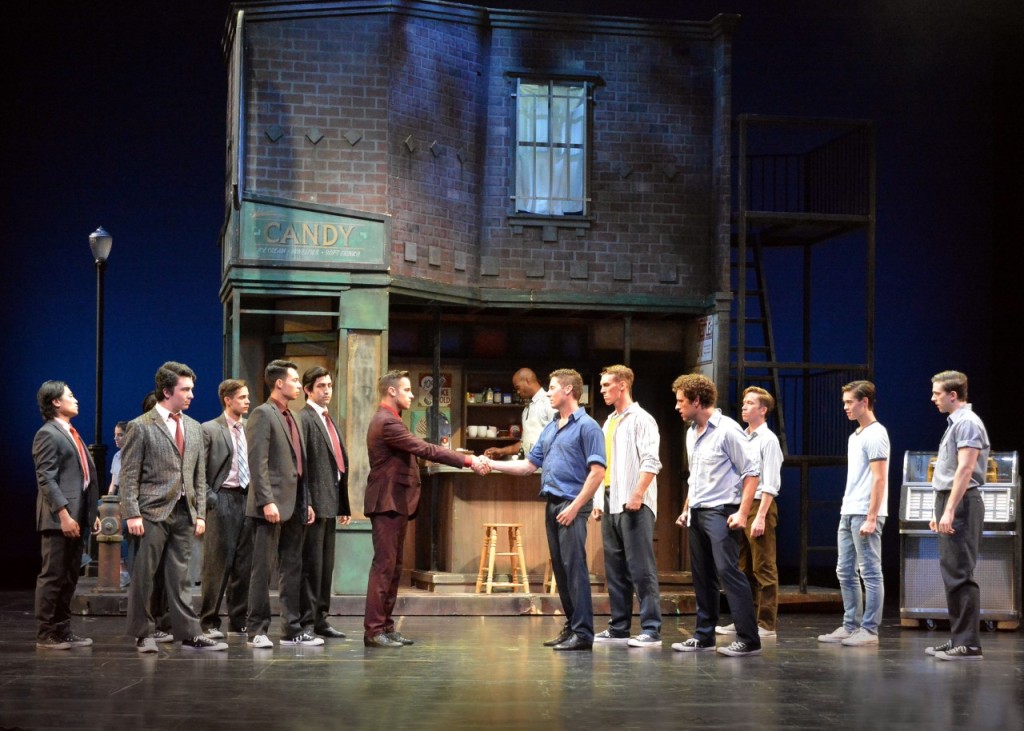 The Sharks and Jets. Photo by Ed Krieger, as is the one at the top of this page.

If this production had been a rumble between the guys and gals, (instead the Jets and Sharks,) the girls would have taken it, hands-down. Lauren Louis, as the spitfire Anita, is the singing-dancing hit of the show. I also adored Giselle Torres, who plays Maria. Her voice is just beautiful. She’s absolutely perfect for the role! In both voice and looks, she reminds me a bit of a young Anna Maria Alberghetti. I have a feeling that it’s her real-life sweetness coming through in her performance. (At least I hope it is! If not, she’s an even better actress than I’m giving her credit for.) 5 Star Theatricals is uber-lucky to have found these two very talented young ladies! 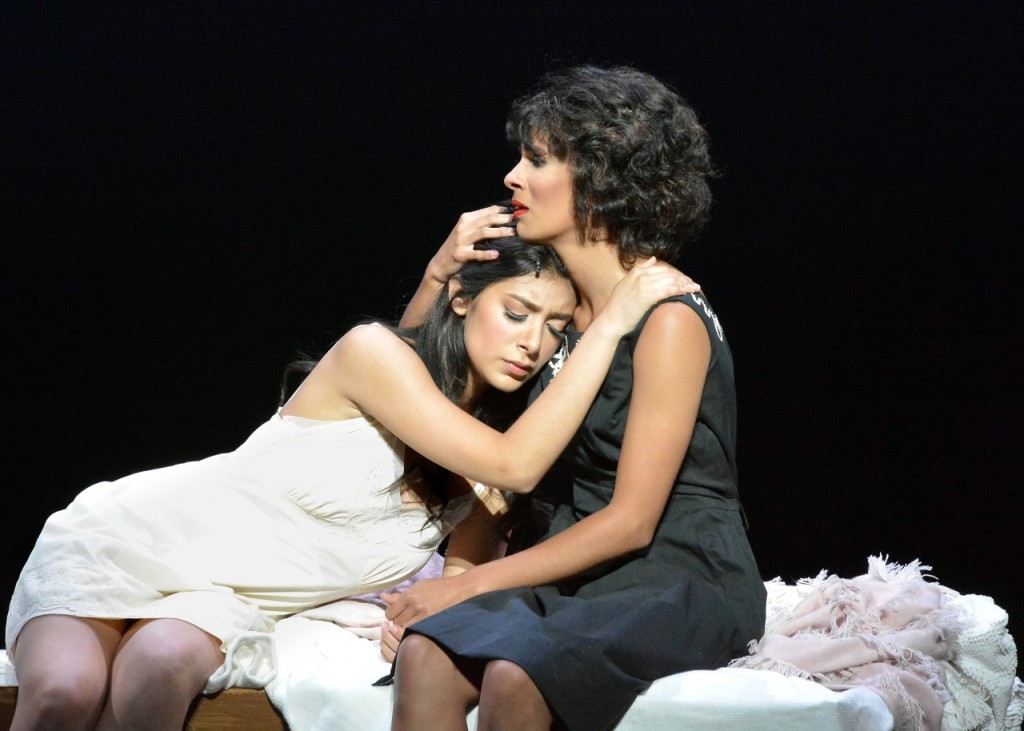 And Taleen Shrikian shows her performance chops on America. She adds a bit of spice and comedy flair to that already-fun number.

Mr. X said that Antonia Vivino was “all in on her character” of Anybodys, the tomboy who hangs around the Jets. (We have always had an affinity for Anybodys; years ago, when a hairdresser erroneously cut off all my hair—yes, all of it—Mr. X tried to cheer me up by telling me I looked like a famous Broadway girl. Unfortunately for me, it was Anybodys. It took me years to look normal again! And now I rarely let scissors near my head—hence, my waist-length tresses. But if I could sing and dance like Antonia, I might be able to deal with having short hair.) 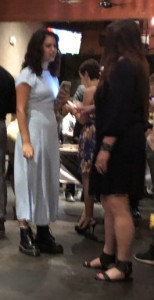 (L-R) At the party, the girl in the great outfit, Antonia Vivino in the background, and Karen Salkin curious about it all! Photo by Mr. X.

By the way, the females also won for the fashions at the opening night party. I almost didn’t recognize Antonia in a fancy dress and heels, and Giselle was all cool and casual in skinny jeans and a jacket. But the absolute winner was the girl in a blue-and-white polka-dot dress, with clunky black boots!!! [Note: I tried to find that dress for myself the very next day. (I already have those hips boots, of course!) When the salesgirl asked what size, I said I’ll take whatever they have—if it’s a small, I’ll lose weight and if it’s a large, trust me–I’ll be happy to beef-up a tad! That’s easy for me. So, big props to either Lauren Louis or Erin Gonzales or someone else; I’m not sure which girl was rocking it because I had eyes for only that outfit!!! So, if you know, please tell me in the Comments section below.]

I’m afraid that the men, on the other hand, don’t quite live up to the women in the musical. But Brandon Keith Rogers, as Tony, duets beautifully with Giselle, especially on the classic love song, Tonight, (which has not left my head all week-end!) I love the blend of their voices. (And those very many stage kisses between that duo are the juiciest I’ve ever seen! I’m just sayin’.)

One thing that had me confused is why Aleks Pevec, who plays Riff, the leader of the Jets, is doing a Boston accent. The characters are totally New York City kids—if any of the performers feel the need to perform with regional accents, it should be New York ones. (And if any actor can not do it properly, the director should step in and stop the attempt. Incorrect New York accents really rub this Brooklyn girl the wrong way!) 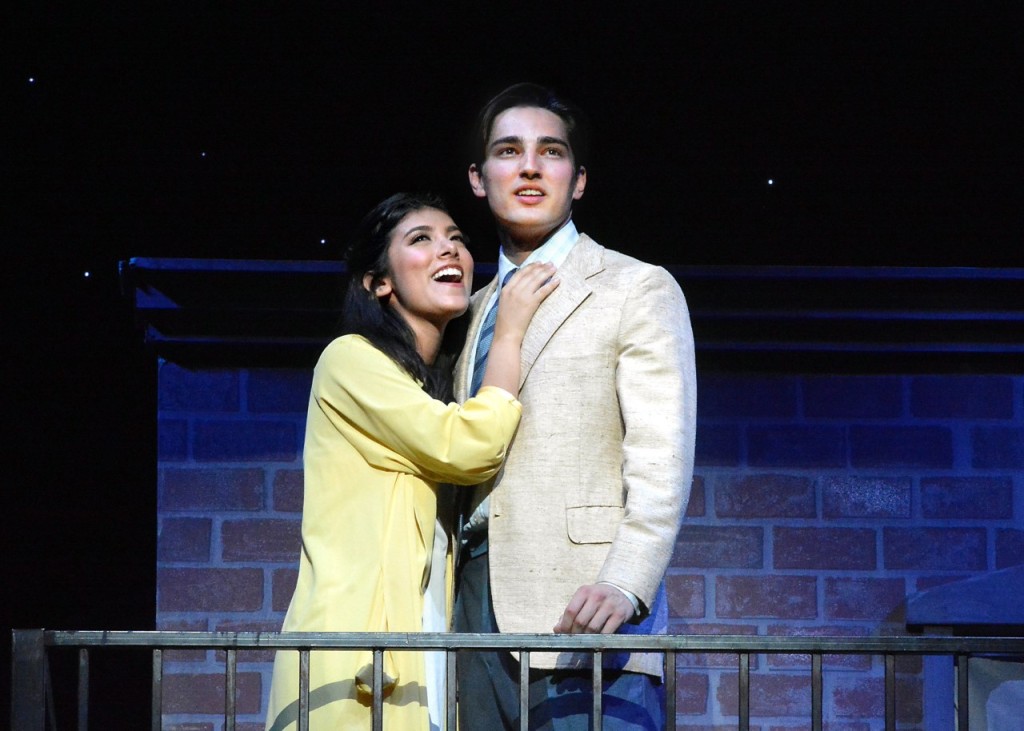 But absolutely everyone shined in the group dance numbers! They were spectacular! A lot of effort went into those, especially on the part of the choreographer, Karl Warden, who kept the numbers looking new, but so in the style of Jerome Robbins, who had conceived the entire original production. Great job on the dancing, all the way around.

The people in all the other creative categories came through, as well.

I really appreciated the simple, fluid sets. Each location is well-defined without being overbearing. [Note: I was surprised that there is no Set Design credit in the program, or you know I would have stated that person’s name.] 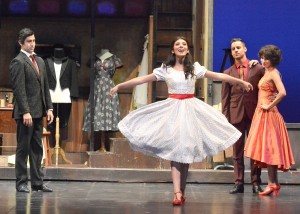 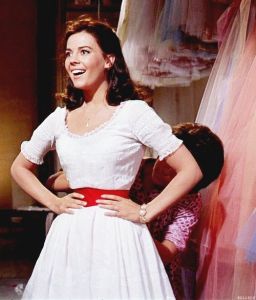 And Natalie Woods’ dress in the film!

I have to give kudos to the Costume Designer, Kathryn Poppen, for all of the colorful wardrobe, but especially for coming very close to Natalie Woods’ white-and-red-sashed dress from the film. That small detail makes the initial scene where Maria and Tony first spot each other even more special.

And what would the show be without the gorgeous music from Leonard Bernstein?! From the second we heard the first notes from this fabulous Jeff Rizzo-led orchestra, we were hooked.

I never realized this before, but West Side Story is like Peanuts—there are no parents! And only a couple of grown-ups, as authority figures!  (After I had already written this, I finally had the time to read the program, and four of the characters are even listed as “The Adults.” I rest my case.)

I really want to laud 5 Star Theatricals for the fact that the program lists not only every single kid who is in one scene, (and gives every actor all the space they want for their bios,) but also all of the musicians, and in a featured spot, too, not in some little letters on the back page. I love all of that. 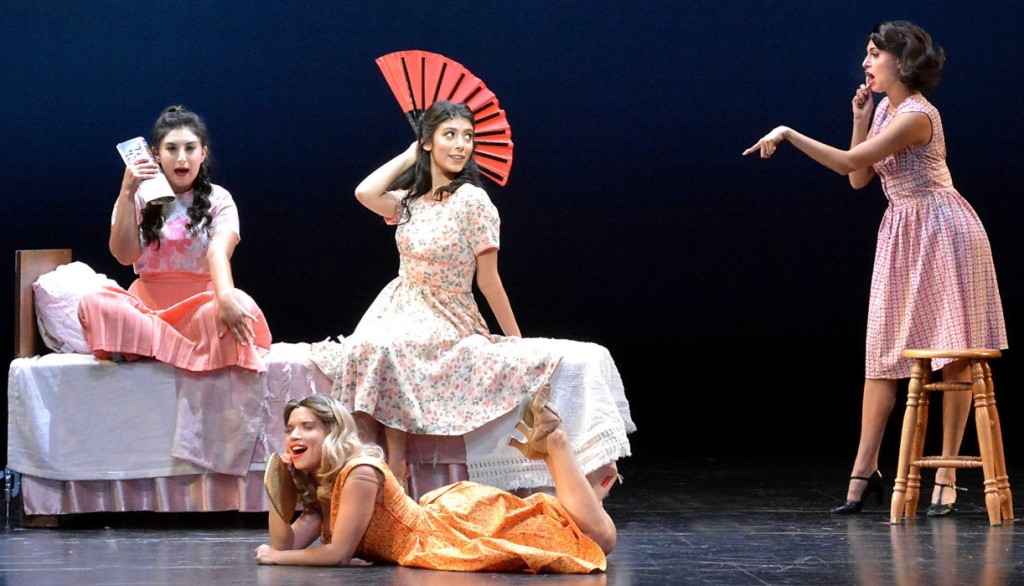 Here’s a little bit of inside information that I got directly from George Chakiris that night. He told me that every single stage production of West Side Story, no matter where, must do it as written. They can’t change anything! I think that’s mainly great, but I like the order of the songs better in the film.

And intermission should really come immediately after the big Act I group number, which features everybody on stage singing at the same time, although different songs and ostensibly in various locations. But even though that first act is already about an hour and a half long, it continues with the big “rumble” scene, which should really open Act II. But I think the powers-that-be on Broadway did it this sort-of nutty way because they didn’t want to have the upbeat number, I Feel Pretty, come right on the heels of all the murders. (That song opens the second act.) This way, they give the audience a break after the violence, and then treat them to a happy number. So I guess it was a choice between an overlong first act or a horrified second act audience. So perhaps they did make the right choice, after all.

The number that I feel should close Act I. Photo by Ed Krieger.

Let me close this review on a very happy note: This Fall will mark the 25th anniversary of 5 Star Theatricals’ existence, which they’ll be celebrating with their next production, The Music Man. And here’s a bit of a fun trivia about it–the movie version of that Tony-winning musical starred none other than the beautiful Shirley Jones, who is the mother of the aforementioned head honcho of this theatre company, Patrick Cassidy! How kismet-esque is that?!