Trending
You are at:Home»THEATRE»THEATRE: WE WILL ROCK YOU
By Karen Salkin on July 17, 2014 · THEATRE

WE WILL ROCK YOU

Before I get to the review of this musical at the Ahmanson Theater, I must issue a disclaimer. I absolutely, 100%, unequivocally detest the Queen song Bohemian Rhapsody. No one get scared, but it incites me to want to kill somebody. I hate it that much.

So it was with great trepidation that I attended the opening night of We Will Rock You. But I knew that my friend Maria would go out of her mind with love for it, and I know that many of you will love it, too, (but like me to go first and tell you about it,) so along I went. It was one of the few times that I wished I actually drank alcohol to calm myself down!

But I needn’t have worried. It was all good fun, and the live music, and incredible voices, made it an enjoyable experience. 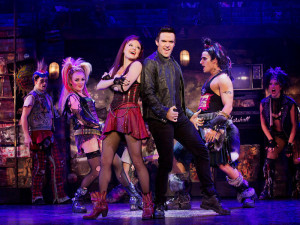 First let me explain what this show is, lest, like many of us did, you think that it’s the story of the British rock group Queen. People have been asking me who’s playing lead singer Freddie Mercury! What it really is is a musical of a fictional story set in the future, where music has been banned, (even though they all break-out in song every few minutes, which then makes no sense.) And all the music is Queen songs. Just like Momma Mia did with Abba songs. We Will Rock You can best be described as Momma Mia meets Tommy.

I rarely tell my readers exactly what a press release says, but if you’re going to see this show, you’ll need this information beforehand. So here are the audience suggestions, straight from the Music Center team:

“Audiences are encouraged to wear their concert tees, download lighter apps, and bring their drinks from the lobby into the theatre – including the special themed drinks The Bohemian Rhapsody (rum, blue curaçao, orange juice and tonic) and The Killer Queen (Jack Daniels Whiskey, ginger ale, pineapple juice and lemon.)  For a fun primer on We Will Rock You etiquette, please see this video–www.youtube.com/watch?v=yS9qH3EEcG0#t=17.”

If that missive doesn’t intrigue you, nothing will. I’m so not even a Queen fan, (unless Adam Lambert is performing with them, of course,) but those instructions alone got me a bit excited about going to the opening night.

I just wish the rest of that audience had been as much fun as the PR people and I were! They were all dressed right for the event, and, always loving playing dress-up, I went all out. I’m not a jeans and casual tee-shirt kind-of girl, but I wore black leggings, a black and silver fancy tee and silver shoes, and busted out my bright red shiny leather jacket! I scoured my plentiful jewelry collection for just the right accents, and came up with earrings and a watch that look like CDs, three necklaces (of varying lengths) that included a British red double-decker bus on a chain, and the pièce de résistance—an actual “rock band,” that’s a giant black leather strap with—you guessed it—a rock on it! I only wish there had been a prize for best-dressed!

So, when you go, don’t be a fuddy-duddy! Half the fun of the evening for me was getting ready, which added so much to the proceedings.

The theatre even hands-out glow stix to hold-up, like at a real concert, or you can bring your own. And don’t forget that lighter app!

Now to the positives about the show:

I had not realized Queen was so prolific! Every song was written by Queen members, and at least half were very recognizable, even to a non-Queen fan such as I. I had no idea that most of these classics were Queen songs! Now, at this late date, I’m finally impressed with that group.

Every cast member was a talented vocalist, but the two leads, Brian Justin Crum and Ruby Lewis, blew everyone away. How could they not be famous? [Note: Seeing Ruby made me chuckle to myself because her physical appearance is the opposite of mine, lucky girl. She has a tiny skinny body with a giant head, (which is what you really need for show biz,) and I have a giant body with a tiny head! Because I have a long neck, my head looks like a peanut on a stick!]

The band was on a platform at the top of the stage, behind a screen, and they were shown every so often, which made those segments seem like a real rock concert. The musicians were great, and were a conscious big part of the fun, which is, sadly, not the case with most musicals.

The audience got a kick out of the clever use of famous song titles as part of the actual dialogue.

And, lastly in the positive category, though the story itself was beyond weak, (which I’ll get to in a second,) I liked that it was a bit of an indictment of people’s internet obsessions, and foolishness like Facebook.

I’m still recommending this show to music lovers, but I must point-out the negatives, beginning with the amateur-ness of the storyline. I know this show ran for a dozen years in London’s West End, (just closing a little over a month ago,) but, even though I absolutely love all things British, they have a weird sensibility in the theatre department. Those of you who’ve ever seen their longest-running play, No Sex, Please, We’re British, will know of what I speak. It ran for sixteen years, and was probably the worst stage production I’ve ever seen!

The beginning of the show. Photo by Paul Kolnik.

For those New Yorkers reading this, We Will Rock You reminded me of high school Sing. Sing is an annual show in all the high schools there, where all four grades compete against each other. They each write an original script and use famous music to tell the story, with the lyrics re-written to fit the occasion. The writing and performances are totally amateur night, and the stories themselves are pretty inane. The premises are things like the gods coming down from the heavens to visit the high school, or Russians dropping by, or the school getting the plague. Or, in this case, it being a future where music is banned. You see how similar to Sing the plot of We Will Rock You is? (Go back and re-read paragraph four if you don’t know what I’m talking about.)

Worse, to a dancer like me, the choreography absolutely sucked. I like to see moves that I couldn’t do, as a child. I choreographed Sophomore Sing better than this! (And my efforts were pretty weak.) The dance aspect of this show was extremely disappointing, especially on a stage where I’ve seen so much of Matthew Bourne’s magnificence. (He’s also a Brit, by the way.)

This last bit of critique is more of an observance than a negative, but I’m telling you in case you’ll be trying to figure out what the talking voices remind you of when you’re watching the show. I think it’s because of the good theatrical voices combined with something the microphones were doing, but when the actors were talking instead of singing, they sounded like the acting voices you hear in Disneyland. It’s a kind-of comforting thing, actually, but just not normal for a legit theatre experience.

So, to sum-up this production of We Will Rock You at the Ahmanson, it’s very Sing-esque, and oh so British. But it’s enjoyable, anyway, because of the live musicians and singing voices, and the chuckles. Tacky as the dialogue is, you can’t help but laugh, which is always a good thing.

But please, if you go see it, be fun! Here was all this fabulous live music, yet in the entire packed opening night audience, only three of us were bopping along! How could all these other people just sit still during it? I can’t imagine what’s in their souls. And hold-up those glow sticks and lighter apps! The audience I was in was all into it at the beginning, but soon abandoned the concert atmosphere. Everyone was quick to jump to their feet and cheer at the end of the show, but I just wish they had been more into the journey. So, please, help the actors out and do your part. And you will, indeed, get rocked!