Trending
You are at:Home»THEATRE»THEATRE: TWO LOS ANGELES THEATRE OPENINGS
By Karen Salkin on May 20, 2015 · THEATRE

Here’s a suggestion for my Angeleno readers: Any night that you’re looking for something to do in Los Angeles, there are plenty of “little theatre” shows to see. Live theatre is such a fun, cultured alternative to the same old, same old of movies or dinner.  As a matter of fact, I saw two of them in the past week. (And so did two celebrities! But you’ll have to wait for next week’s latest Celeb Sightings column to find-out who they are!)

In all honestly, I must admit that I wasn’t a fan of either of these productions overall, but they each have something to recommend them.  So, here’s the skinny on them.

COMEDY OF ERRORS AT T.U. STUDIOS 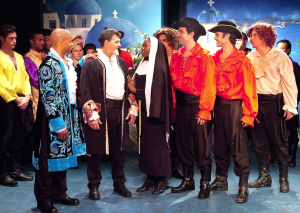 Joshua Farmer is second from the left, in back, in purple. Photo by Ed Krieger.

The one and only reason to see Comedy of Errors is to witness Joshua Farmer play Angelo, the Goldsmith, in the most unique Shakespeare performance ever!  He’s the only actor who ever made Shakespeare clear to me.  But, alas, his revelatory performance is in a not-big-enough-for-his-talents role, and in the second half only. My interest in this production had waned long before Joshua entered, but when he started talking, I sat right up, leaned forward, and laughed my butt off!!!  Even though you have to sit through the rest of what is mostly inanity to see Joshua work, he’s worth it!  [Note: There are two casts, so when you order your tickets, make sure to ascertain that Joshua is, indeed, playing that role that night.]

But the rest of the play isn’t a total loss.  If you’re a fan of Shakespeare, (which I definitely am not,) it’s your chance to see one of his plays, which, (thankfully in this case,) is his shortest.  And, for those of you who like your classics populated with half-naked women, this one inexplicably has belly-dancers on stage all night. (Those woman also contributed lots of good hair, albeit their many unnecessary high-pitched yells were really annoying.)

I did really like the painted backdrop, designed by Davia King and Jeffrey Casciano, which makes the small stage look like a bigger space.  I don’t know how they fit so many people on it at one time! (But I also don’t know why so much of the action was on the sides, rather than the center, of the stage.) And the costumes were excellent, as well.

And even though Justin Truesdale and Antonio Roccucci, as the manservants, pretty much over-act, (which it looks like they were directed to do,) they both make their roles at least interesting and fun to watch. And Justin looks just like Mike Myers, (which is fitting, since the whole show seems like one very long SNL skit, with way too many “high school” touches for my taste; for example, the weird witchy woman character in the second act was just awful.)

I heavily suggest that you look-up the story of Comedy of Errors before you go, or, until Joshua Farmer comes on, you’ll be lost.

Lastly, here are my good impressions of the venue itself: In all my years in L.A., I had never heard of T.U. Studios, but I liked this little theatre.  The seats aren’t very comfortable, but there was something cozy, and easy, about the experience on a not very populated street. You just park (free) right in the back and walk in the door! No fuss about this one. That’s always a positive! 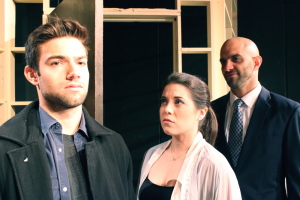 The good news on this new play at Theatre West, a very well thought-of Equity Waiver company near Universal, is that it’s an interesting story, by Jule Selbo, ala the 1967 film Games, which starred Simone Signoret and a very young Katherine Ross.  It’s rare to see such a psychological drama on-stage, as opposed to on film.

The bad news is that, despite Boxes being just one act, of an hour and forty-five minutes, the play is so slow. The actors put big pauses in-between every…single…sentence.  I don’t know if that’s their fault or that of the director, but, as an audience member, you have to possess a lot of patience to get through it.  (Hopefully, when they read this review, they’ll speed it up by the time you see it.)

I don’t really understand the snail’s pace because the director, Mary Lou Belli, directed a few episodes of my favorite TV show, Hart of Dixie, so I know she has to be good. I love that show! [Note: I know it’s not the classic television taste, but have you met me?! I’m all about getting into scrapes, especially romantic ones.]

And I do have to give the actors credit for something weird that happened on opening night.  In the middle of the presentation, it started pouring outside.  I could not believe how loud the rain and thunder were inside the theatre! It seemed like the entire audience reacted to it, but the actors didn’t flinch.  So, props to them for carrying-on.

I do wish they had gotten a tad louder, though, because it was a bit hard to hear them over the ruckus that nature was making.  They were all actually speaking too low even during the normal weather.  And I was sitting pretty close, so I can only imagine the trouble people in the back had hearing them.

I actually loved the rain episode because it reminded me of my summers in New England, where we could always hear the outdoor elements inside every theatre there. It was such a special experience for a girl from New York, where that would never happen!

By the way, Theatre West is known for producing quality shows, so, even with components of this production to smooth out, you can rarely go wrong here.