Trending
You are at:Home»THEATRE»THEATRE: TWIST—AN AMERICAN MUSICAL
By Karen Salkin on June 29, 2011 · THEATRE

A really fun time was had by all on opening night of Twist—An American Musical at the Pasadena Playhouse this past Sunday. The show was entertaining, the theatre itself is always a pleasure to be in and around, and the double after-parties catered by next-door neighbor Elements were perfect. You know that I’m chomping at the bit to tell you of the clever and delicious food, but I have to start with a review of the show. 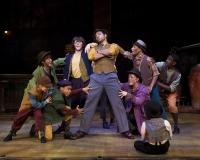 Twist is to Oliver what The Wiz was to The Wizard Of Oz—a more colorful, ethnic version of the same story, and both based on famous books; Charles Dickens’ Oliver Twist, in this case. (A few of us thought it had a little bit of Annie in it, as well.) This time, the musical is set in 1920s New Orleans, rather than the original streets of London, which gives it the opportunity for bluesy and jazzy song and dance numbers.

Look-up Oliver Twist, if you want to to be more familiar with the story, or, better yet, let it just unfold on stage for you. This take on it is interesting to me because the orphan Twist is bi-racial. My favorite friend, whom I’ve told you about many times before, Ronnie Hazel, Jr., is in that same situation. I’ve known him really well for the entire eighteen years of his life and I had never heard him mention it, but when Obama was elected, he made a passing comment that they were the same in the category of race, and it seemed to comfort him, so perhaps it did bother him deep down just a little. I know it is an issue for many people of mixed races, but it hadn’t hit home until he said it. My feeling was always that everyone should be so lucky to be as gorgeous as Ronnie, so I considered it a good thing. (Growing up, people would ask him what his heritage was. He always answered, “American.” I love that kid!)

Alaman Diadhiou at the after-party, listening intently to the congratulatory speeches. Photo by Karen Salkin.

Speaking of Ronnie, the little boy who played Twist, Alaman Diadhiou, reminded me of him a bit. Alaman’s face is absolutely beautiful and his performance, thank goodness, has nothing of the usual conceit that children actors are guilty of more often than not.  I met him after the show and he was lovely and polite.  I hope he stays that way.  Oh, I almost forgot–he can sing and dance, too!

I’m always more interested in dance than song, as many of you know from my many rants about how unfairly dancers are treated, in relation to just how much talent they must possess to get even the most trivial of jobs in this biz. I knew that with Debbie Allen directing and choreographing, we could expect many, and special, dance numbers, and I think I can speak on behalf of the whole enthralled audience when I declare that we were not disappointed. 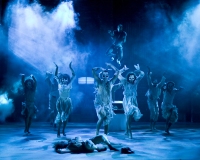 I mean this as a total compliment–the “nightmare” dance sequence in Act I looked like a group number from a results show on So You Think You Can Dance, so of course I loved that one! Debbie knows great dancing, and she cast all good dancers. But the most surprising to me was a tall Caucasian teenager, Chase Maxwell, who stepped out front for just a brief moment in one number. I think he could win a season of the aforementioned television show.

One bit of trivia that I must share, that I wish I had realized myself going into it, is that the lean beauty, who played the small role of Josephine Baker with élan, is the daughter of Debbie Allen and her husband, former LA Laker Norm Nixon!  Genealogy geek that I am, I would have paid extra attention to her.

Another bit of knowledge that I wish I had possessed beforehand is that the upsetting events of the second scene will be over quickly, so, if you’re like me and get depressed even when you know it’s fiction, (which the show is, but unfortunately, events like the one portrayed are all too real,) just hold on for a sec because the story needs this prologue. And keep in mind that musicals like this usually have at least a semblance of a happy ending.  (I’ve been told that I’m an Empath, so it’s hard for me to rise above any injustice, even a fictional one, but, trust me, I know that’s not normal.) 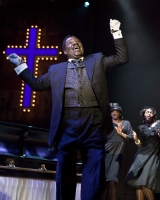 I can’t believe I’m saying this, but the singing was at least equal to the dancing! I was surprised by the great voices, actually. The only cast member I was really familiar with is Cleavant Derricks, who I absolutely loved in The Full Monty a few years ago at the Ahmanson. Every time I see his name in a program, I know that there will be at least a few non-boring moments in the show I’m about to see, (not that there were any in this one.) I only wish that he could have had more than one number in Twist, but it wouldn’t be possible in the story.

I was happy to discover that Tamyra Gray, the female lead, sings really beautifully.  I know this will come as a shock to most people, but I didn’t watch the first season of American Idol!  Which means that I was only minimally familiar with Tamyra prior to Twist.  And I was pleasantly surprised at just how good she is.  I believe she’s been on Broadway a couple of times in the the ensuing decade, and I can see why. (As a matter of fact,I know that the team is hoping to take this show to Broadway, and I’m pretty confident that it will get there.)

As a girly-girl, perhaps even more impressive to me than Tamyra’s performance was the stunning shoes she had on at the after-party!  My mouth was watering.  And she was really nice, too, even before we realized that we have a mutual good friend.  That’s good to know about someone who could otherwise be full of herself.

The songs were all good enough, but I really can’t judge their merit because I’d have to hear them several more times to see if any grow on me.  There was one in the second act, though, that I really did want to hear again right away–Partners In Crime, the duet of the two crooked men, played perfectly by Matthew Johnson and Pat McRoberts. Since I’m DVR-obsessed, I wished that I could immediately hit rewind. Their individually-strong voices blend perfectly. And I was thrilled that I could understand every word uttered by all the actors at all times, whether singing or just speaking. That’s always a plus in these days of everyone thinking it’s cool to slur their words.

I feel bad mentioning this one weakness, especially since, thankfully, her part was minuscule, but Ava Gaudet, as Twist’s pregnant mother, didn’t sing well at all. I’m not proud of this, but I was actually a tad relieved when her character died pretty quickly in the show. (I’m not giving anything away; the scene sets up the main character’s journey.) Perhaps she was sick that night—I recently decided to start giving people the benefit of the doubt. (I hope this phase of mine doesn’t last too long, though!)

The performance ended on a high with one of the most fun curtain calls I’ve ever seen! The audience could have cheered them on for another twenty minutes! I love leaving a theatre with a bunch of happy folks.

Someone knocked into me as I took this photo, but it's so yummy that I had to print it anyway.

Which brings us to the very well done parties. This is what I admired the most about what Elements Kitchen did: the main party, for the cast, crew, producing team, and just a very few VIP guests, was inside the actual restaurant, with brilliant food. But the catering team was kind enough to set up a table of lovely snacks in the courtyard of the Playhouse for members of the audience who are usually included in the after-parties. It was basically cheese and crackers and veggies, but there were also several baskets of colorful wrapped “theatre” candy, including big bags of M&Ms, Snickers, Reese’s Peanut Butter Cups, and Nestles Crunches. They presented a beautiful visual and provided a fun atmosphere. I also spied some kind of specialty-something table, but I was too busy socializing to investigate. I’m sure that the courtyard guests enjoyed themselves thoroughly.

"VIPS" including Debbie Allen in the middle. Photo by Karen Salkin.

Inside Elements was just wonderful! The vittles went along with the New Orleans theme and included mouth-watering fried chicken legs, (I never eat legs, but I couldn’t be separated from mine that night; that’s how delicious they were!,) make-your-own pulled pork sandwiches, salad, corn muffins, and jambalaya with just the right amount of spice. I could have gone back for seconds easily, but I was interested in hearing the opening night speeches that had just begun right next to me, near what I considered to be the “VIP section.”

The pièces de résistance seemed to be the round chocolate cake pops on sticks. Some were covered in dark chocolate, my fave, and others in white. I swear, this just hit me—I wonder if that was to go along with the theme of the show! If that was the significance of the desserts, the caterers are even more brilliant that I originally thought!

The food was so delicious that I hope I have time to go back this summer to do a proper review for you. I’ve grown to love Pasadena, so I’m happy for excuses to go there, and reviewing Elements would be a great one!

With culinary treats like that, I practically tap-danced home, only not nearly with the skill of the performers in Twist.