Trending
You are at:Home»THEATRE»THEATRE: THE WOMAN IN BLACK
By Karen Salkin on October 22, 2018 · THEATRE

THE WOMAN IN BLACK

This by-now-famous play at the Pasadena Playhouse is an interesting one. I guess its genre is horror, which I usually eschew. But The Woman In Black is done so–dare I say charmingly?–that the horror aspect did not bother me, at all! 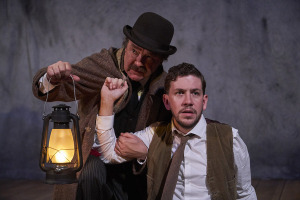 Bradley Armacost and Adam Wesley Brown. Photo by Roger Mastroianni, as is the big one at the top of this page.

And entertainments with just two actors are a close second in the category of my theatre dislikes, but I’m so glad that I didn’t let that deter me, either, from attending this opening night because, despite that low number of actors, there are many more characters than that in this show. As I said—interesting.

The Woman In Black has been in existence for quite awhile. The gothic horror novel was published in 1983, followed by a few television and radio adaptations, this British play,* and then a film. And my research shows that the story is a bit different each time. *[Note: It’s actually the second longest-running non-musical in the history of the West End in England! (Can you guess the show it’s running behind?)] 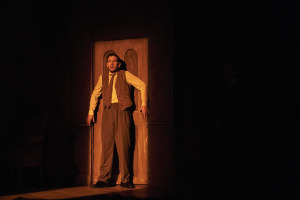 Since it’s also a mystery, there’s really not too much I can say about this one without ruining the enjoyment for those of you who are going to see it for yourselves. On top of that, I got so caught-up in the presentation that I didn’t write any notes!

But I do have some advice for you: Don’t let your mind wander for even a minute, or take your eyes off the stage at any time. There are several scary surprises. There’s even one non-scary clever one on the way out. Outside of that, I’m afraid my lips must be sealed.

But I must open them a bit to laud the two excellent actors who keep the action going throughout—Adam Wesley Brown and Bradley Armacost. And I very much appreciated that there’s so much humor in an otherwise bleak ghost tale.

There’s also a ton of good physicality, and the production makes superb use of what is basically a sparse set. 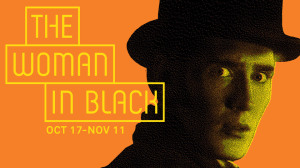 At first I was wondering why the Playhouse chose to produce this thirty-year-old play now. But then I realized that, of course—it’s Halloween month! Even the cover of the program is orange and black! So, if like me, you’re a fan of spooky happenings in October, (and the beginning of November, actually,) this is the theatrical experience for you. Just bring along someone you can grab onto, if need be. Just sayin’.