Trending
You are at:Home»THEATRE»THEATRE: THE WIZARD OF OZ
By Karen Salkin on September 20, 2013 · THEATRE

THE WIZARD OF OZ

There’s so much to say about this new production from Broadway LA at the Pantages theater, but we’ll get to the details in a minute. If you have don’t have time to read the rest of this review, all you need to know is that you should absolutely not miss this in the three weeks that it’s in town. I got choked-up as soon as the orchestra played the first notes!

The Wizard of Oz, as done on-stage, turned out to be exactly everything I want in a musical. It’s just sheer enjoyment all the way through; there’s no pain, no angst, and no boring parts. I would venture to guess that ninety-five percent of the opening night audience knew the story, but it still wasn’t predictable in this incarnation; there were a ton of surprises, including some modern lines towards the end, which made me laugh just as my gentle tears were turning into heaving ones. I loved that they made me laugh through the tears. 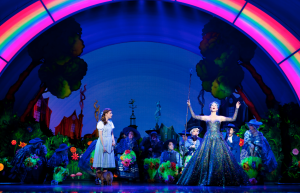 I cannot tell you how excited I was to see this show! The classic Judy Garland film has always been one of my favorites my whole life, and then shortly after I moved to LA as a teenager, and met Mr. X, it became what I always refer to as our “romantic movie.” (But I cannot share with you why. As shocking as it is, I actually do keep some things private, which will be a relief to Mr. X when he reads this.) (Sadly, Mr. X was too pooped from waiting on me hand and foot, but especially hand, since my hand surgery last month, to accompany me to opening night. No worries though–one of my best friends, Lyndsey, was more than happy to step in, especially since we always have so much fun going to theater together. And she went nuts over this show!)

Okay, let’s get to the review already! The Wizard of Oz at the Pantages Theater is as fabulous as I hoped it would be! I was worried that it wouldn’t live up to my expectations, but it went much beyond them.

I’m a purist when it comes to The Wizard of Oz, so, of course, I wanted all the portrayals and all the lines to be exactly the same as they are in the film. The brilliant movie cast members, (Judy Garland, Ray Bolger, Jack Haley, Bert Lahr, Margaret Hamilton, Frank Morgan, and Billie Burke,) were so spot-on that nobody can ever live up to what they did, as far as I’m concerned. And I know that most actors don’t want to re-create exactly what someone did before them; they would rather come up with their own way of doing things. And that’s exactly what most of this stage ensemble did, to varying degrees of success. I didn’t mind what most of this group did, but the two witches and the wizard did disappoint me a bit, though I doubt that anyone else in the opening-night audience cared, or even noticed. And the whole show was so fun that I decided to just go with the flow; if I needed to see Margaret Hamilton’s terrifying bad witch, Billie Burke’s beautiful and gentle Glinda, or the supreme quirkiness of Frank Morgan’s wizard et al, I can just watch the movie at home some other time. 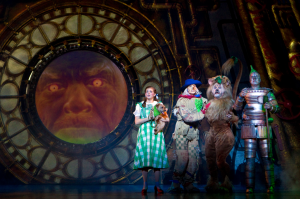 Those three less-than-stellar performances, and the addition of a few unnecessary original songs, (albeit composed by Andrew Lloyd Webber and Tim Rice,) were the only things that bothered me even slightly about this production. The rest was an incredible visual treat. The story was the same as always, but the set and costumes and visual effects and little nuances were all fabulous!!! Some tiny elements of the story were changed a little, I’m assuming for the ease of staging, but it really didn’t bother me. And it seemed like the producers updated some things a tad, (like adding several gay references,) for the sake of comedy, which the movie didn’t need, but I can see where a stage show can benefit from it. (Heck, when I saw a stage version of Who’s Afraid of Virginia Wolff several years ago, I couldn’t believe how funny they had made that story! Some theater pieces just lend themselves to that humorous touch.) The surprises is in this particular production were all excellent, and I think the entire audience appreciated the unexpected laughter they brought.

During intermission, I was wondering what had taken the theater world so long to bring this story to the stage. Then Lyndsey pointed out that current technology really aided this endeavor. She’s right about that; even the images that were projected on the stage screens were a sight to behold.

One interesting note on this production: It comes to us from Toronto, Canada, where it had its North American premiere earlier this year at the Ed Mirvish Theatre. I’ve been attached to that theatre ever since Mr. X starred in a musical there when I was first seeing him, and I became sort of the “Phantom of the Ed Mirvish.” I was actually almost banished from there by Mr. X himself for being such a fun distraction to the rest of the cast and crew. Let’s just leave it at that one of his back-up singers never made it to stage one night because I was teaching everyone Uno, and we were laughing so hard that the guy couldn’t hear his cue! I’ll cherish my memories of that theatre forever. 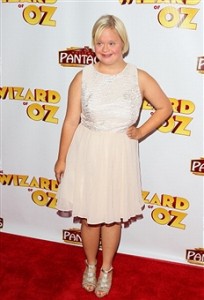 My seatmate, Lauren Potter from Glee. Photo by JB Lacroix for Wireimage.

And lastly, a note about the wonderful young lady I had the good fortune to sit next to on opening night, the adorable Lauren Potter, who plays Becky on Glee. I’ve written about her before, because every time I’ve bumped into her at an event, she is the sweetest, most polite person in show business, and I love lauding people like that. But sitting together on opening night was extra special. She was wearing a beautiful dress, and as I sat down, I said, “I love your dress!” She very politely turned to me and said, “Thank you. I love yours.” Trust me, my outfit that night was nothing to write home about; I had planned on wearing my own ruby slippers, but since it’s still hard for me to get dressed at this point in my hand recovery, I just went with basic black, and disappointed myself. But it was so adorable that Lauren told me it was nice.

I love laughing with people, and as the evening went along, I noticed that Lyndsey to my right, and Lauren to my left, and I were chuckling and guffawing in concert. It was such a great feeling. I’ve recently begun writing a column about all the horrible audience behavior I’ve encountered through the years, so especially because that topic has been on my mind, sitting with someone so cheery and pleasant and polite, particularly for a show as special to me as The Wizard of Oz, made the evening that much better. What a treat that was.

And what a perfect evening of theater The Wizard of Oz is. Please don’t miss it.