Trending
You are at:Home»THEATRE»THEATRE: THE STORY OF ALICE
By Karen Salkin on May 9, 2016 · THEATRE

THE STORY OF ALICE

There’s a lot to like in this fantasy musical that’s based on Alice In Wonderland.  While the show is waaay too long, and very confusing, with a lot of bits that do not pay off, some of the performers are wonderful, and worth seeing.  And I feel that all of the cast members can wind-up being famous someday soon, so it will be fun to say that you saw them at the beginning of their careers. 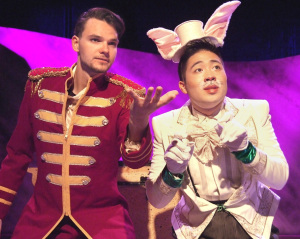 Justin W. Yu on the right. Photo by Ed Krieger.

I can’t really tell you the story because my friend and I had no idea what was happening, at all. Yes, a girl named Alice wound-up in some fantasy land, but I don’t know why or how, or what was going on.  The action was all a mush.  Some of the characters were indeed from Alice In Wonderland, but most were not. It was all pretty baffling. (And, for a musical, it was a tad strange that none of the songs had identifiable endings. We all had to kind-of figure-out that they were over for ourselves, which caused the applause to just trickle.) So, if you just don’t try to follow the goings-on, and instead concentrate on the positives, you’ll be in for an entertaining evening.

First of all among those positives is that The Story of Alice is at the venerable Matrix Theatre on hip Melrose Blvd.  So, it lends itself to a fun week-end evening that can include shopping, dining, and fabulous people-watching.  I felt like I was in with the in-crowd just going there.  And the seats and sight-lines are excellent. 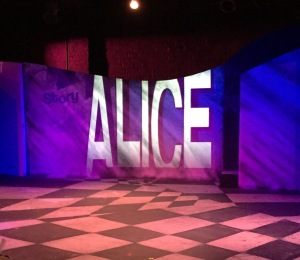 The stage. Photo by Karen Salkin.

I brought my own friend Alice, (because I obviously like to go with a theme,) and she got excited from the start just seeing the checkerboard pattern that’s painted on the floor of the stage, which always connotes “Alice In Wonderland” wherever it is.  (I still refer to a room I stayed in once in New York’s Paramount Hotel as the “Alice In Wonderland room” because the carpet was black and white checkerboard.)

There were three stand-out performers for us.  I could have just listened to young Nic Hodges, (who plays several roles,) sing all night.  If you ever get the chance to hear him, take that opportunity!  And we were shocked to learn that Justin W. Yu, who plays the White Rabbit, is not a dancer, per se.  That guy is so light on his feet, and movement is certainly a specialty of his.  I envisioned him being on tour with top acts!

Our fave, though, was the adorable Nikki D’Amico, who’s appearing in The Story of Alice direct from her triumph as the star of Always…Patsy Cline at the Sierra Madre Playhouse.  That was, by far, the best performance I’ve seen in the past several years, so I could not wait to see her in this one.  And she definitely did not disappoint.  She plays a trio of auxiliary characters, including a version of Tweedle Dum, which was hilarious because she’s a tiny little thing.  But that girl gives it her all every time, and sells everything she does, which, as an audience member, I really appreciate.  And she’s absolutely graceful in every single movement, which, as a former dancer, I always notice about performers, and heartily applaud. I love when an actor goes that extra mile.  [Note: I’m so sorry that I have no pix of Nic or Nikki.] 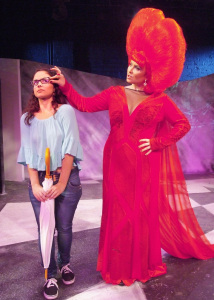 The Queen on the right. (Duh.) Photo by Ed Krieger.

In addition to those performers, there were a few other areas that stood out to us.  First is the eclectic costumes, put together by Mylette Nora.  And, since stage actors always do their own  make-up, we just had to meet Emily King Brown, who not only played the Queen with panache, but did some of the best theatre make-up I’ve ever seen!  The Matrix is only three rows deep, but I (embarrassedly) broke-out the binos to study every detail of what she did!  (I found-out later that Emily is also a make-up artist, so you might want to check her out for your own next big gig!)

I loved that Scenic Designer Yee Eun Nam enhanced her very minimal set with special projections throughout.  They really set the mood, and even helped us understand some of the locations. For some inexplicable reason, there was a scene with some creepy people, smoking cigarettes around a baby, which had us scratching our heads a little extra. And then we noticed the projection of a trailer, and realized these peeps were portraying “trailer trash!” Why, we could not figure-out, but at least the projection gave us some context.

And how often do you find excellent live musicians on stage at a little theatre?  Of course, since this is a musical, they played all the songs, but what we appreciated even more was the incidental music they provided throughout.  I can’t tell you how much that added to the action because, taken place in a fairyland, this was a cartoon-like show.  The sound effects were great, and made us laugh, or at least smile, every time.

The show ended on a positive note, and the big penultimate scene was the best one, as is the song from it, Stand Up and Fight.  Add in the several clever little surprise touches along the way, and you have a mainly interesting theatre experience.  Just don’t try to figure out the story.