Trending
You are at:Home»THEATRE»THEATRE: THE SOUND OF MUSIC
By Karen Salkin on October 2, 2015 · THEATRE

THE SOUND OF MUSIC

If you see this show for no other reason than to hear the glorious Ashley Brown sing Climb Every Mountain, your time spent will be worth it. I embarrassedly admit that it’s usually a song I sing around the house in jest. But Ashley gave me chills. And brought the house down during the opening night curtain call. (I felt a bit bad for the two stars who had to take their bows right after her!) Her voice filled the room with so much emotion that it almost made me want to turn Catholic!  (More on her in a moment.) 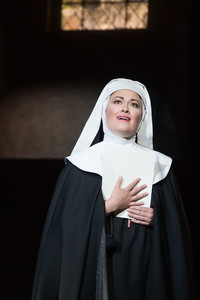 That song is the highlight, for sure, but the entire production is fabulous. It is classy, beautiful, and lush, with wonderful, creative Douglas W. Schmidt-designed sets, and excellent voices. And this comes from someone who, (even though I almost hate to say this out loud,) has never been a fan of the Rodgers & Hammerstein classic, The Sound of Music. Never. My parents would be ashamed of me for that. So, my enjoyment of this production comes as a surprise to even me!

Before I went to to the Ahmanson Theatre the other night, I was convinced that nothing could change the fact that I just don’t like these ditties. (And, I swear, I love most musicals from that era.) But even The Lonely Goatherd didn’t bother me this time! I’m still in shock over that, two days later. I’ve always hated that song! (I also loathe My Favorite Things, but I think that’s because radio stations always play it erroneously as a Christmas song! What genius started that inanity?!)

Here’s something else that’s hard to believe—I had never seen a stage production of this show until now! That’s strange because I grew up in New York, with very culture-oriented parents, who took us to see everything—Broadway, off-Broadway, summer stock, even high school productions! But nary a Sound of Music anywhere! Of course, I have seen the Julie Andrews film, (I’ll tell you a story about it at the end,) and that worse-than-dreadful TV production, starring Carrie Underwood, last year. Then recently, a friend whose opinion I respect, mentioned the show to me. So, I figured I better give this Jack O’Brien version a shot. 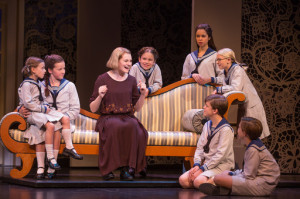 And I’m soooo glad I did. It was a delightful evening of pain-free theatre, (except for the Nazis, of course.) The audience was upbeat all night.

The show is also somewhat relevant right now because of the recent visit to the United States by the Pope. I seriously felt a bit closer to the religious aspect of the show because I’d just seen so many church services on TV last week. But nobody on those sang like these show biz folk did!

I have to laud the whole company for one thing, in addition to all the mellifluous singing and acting: we could actually understand every single word that was sung by anyone! And spoken, as well. That’s a rarity in theatre these days. 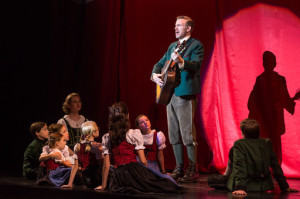 I’m sure that the entire world knows the story of this musical that is based on the real-life Trapp Family Singers, and if you don’t, please look it up. You don’t need me to break it down for you.

You just need me to tell you that I highly recommend this production of it.

If memory serves me right, (and it just about always does, knock on wood,) I believe there were a couple of songs in there that were not in the movie. Two of them sounded like I had never heard them before, (or perhaps I did in that TV version last year,) but they were fine. The only little bit of the show that I didn’t like was the weird hand movements Maria was doing to illustrate Do-Re-Mi. They made no sense, so I found them annoying.

And, although the casting was pretty spot-on for the most part, there are two instances that confused me a bit. When I originally read, several months ago, that Ashley Brown was to be in the show, I assumed that, (especially since she originated the title role of Mary Poppins on Broadway just a few years ago,) she would, of course, be playing Maria. I was shocked to discover that she was instead the Mother Abbess!  She’s only thirty-three, for goodness sake! (But, had she been Maria, we would have been deprived of hearing her sing the aforementioned show-stopping Climb Every Mountain, so I’m actually glad it turned out this way.)

Conversely, Teri Hansen, the woman who plays Elsa Schraeder, the erstwhile fiancee of Captain von Trapp, appeared to have some seniority on Ben Davis (as the Captain,) so I thought that age difference was going to turn out to be part of the story. (Remember, I had never seen the stage show, and I know that movies aren’t exact copies of the originals, so I wasn’t quite sure what the scenario, as written, was.) So I found that age difference a tad distracting. It didn’t bother my friend, Jeanine, though, at all. She said, “I thought Teri was great in the role.  Just the right amount of snottiness and kindness to Maria and the children. She has a beautiful voice, and she was funny.” (I agree with her, by the way, on all those counts.) 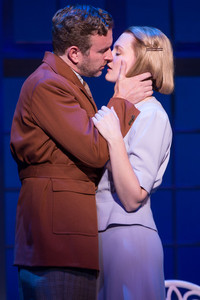 I was surprised to learn that Kerstin Anderson, who stars as the central character, Maria, had never done a professional show before. She’s actually a New York college student whose first pro gig this is. You really could not tell that on opening night, so big props to her.

And to everyone involved with this show, for making this nay-sayer love The Sound of Music for the first time in my life!

And it’s not just my Los Angeles readers who will get to enjoy all this fun; this show will be touring the country when its month-long run at the Ahmanson is over. You really shouldn’t miss it, no matter where you’re located in the country!

[Okay, here’s that story I promised earlier, although it may be TMI for some of you, so consider yourselves warned. When I was about fourteen, I visited an aunt in Florida. She introduced me to a family she was friends with, and of course, I was thrilled to see that there were three handsome sons, all a little older than I was, and whose names all also began with “K,” so I was in heaven. The oldest one, who was about nineteen or twenty, asked me out on a date, and to impress me, he took me to one of those theaters that play old movies, which he knew I loved. And it did work, for a little bit. The old movie was The Sound of Music, and I was very impressed that Ken would be so sensitive to take me to what was far from a teen-age guy movie. But then he ruined it by trying to shove his tongue down my throat during the film. (I wouldn’t have wanted him to try that at any time, but during the film was especially creepy. Remember—I was only fourteen.) I told him if he tried that again I’d bite his tongue. Guess he really didn’t know me that well because he did try again, and of course, what did I do? Bit his tongue! He screamed out, “You bit my tongue!” I don’t know why he was so surprised—it is exactly what I told him I was going to do! I could not have been more clear! So, that might have something to do with why I was never a fan of this musical. Until now! (And I wound-up going out with both his younger brothers. And, as predicted, neither one of them tried that slimy Goatherd-inspired move on me!)]