Trending
You are at:Home»THEATRE»THEATRE: THE SEARCH FOR SIGNS OF INTELLIGENT LIFE IN THE UNIVERSE
By Karen Salkin on September 30, 2022 · THEATRE

THE SEARCH FOR SIGNS OF INTELLIGENT LIFE IN THE UNIVERSE

Let me tell you, the search for signs of intelligent life is what I’ve been conducting on a daily basis since I moved to LA as a teen-ager! With very few good results, I’m sad to say. So I totally respect what Jane Wagner, the writer of The Search for Signs of Intelligent Life in the Universe, brought to our attention all the way back in the ’80s, when she created this one-woman show for her partner, the legendary Lily Tomlin, who won a Tony for it. And now she’s reimagined her own work for today’s audiences, presenting it this time with SNL‘s Cecily Strong in the role. 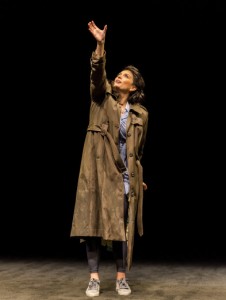 Over the years, few TV topics have been debated as much as Saturday Night Live‘s cast members. There have been many disliked peeps along the way, and some just plain controversial ones. But never once, in the whole decade that she’s been on that show, have I heard even one bad word about Cecily Strong. Including from myself—I’m a fan!

So the great ovation for Cecily when she suddenly appeared on the Mark Taper Forum stage on opening night of this a-tad-updated version of The Search for Signs of Intelligent Life in the Universe is quite understandable. And deserved.

Before I get to my thoughts on the production, I must backtrack a second to share some of my Lily Tomlin stories. Many, many years ago, I met Lily, (right outside this very theatre, by the way!,) and she was darling to me about my TV show. For a while after that, whenever I got too down on myself, I’d ask the friend who was with me that night to remind me of what Lily said to me, and was instantly cheered up. How lovely that one human being can do that for another with just a few words!

Then many years later, Lily and I wound-up sitting together on a flight to New York, and though she didn’t remember me, she was just as charming as she was at that first meeting. We whiled the time away by talking about our mothers, (who have similar names,) their Buicks, and discovering all our mutual show business pals. The hours just flew by!

Preceding all of that, Mr. X and Lily starred in hit shows literally across the street from each other in Boston, and when we met her again years later, she didn’t remember me, but happily declared of him, “I know this guy!,” and proceeded to laud his work. Anyone who shares my admiration of Mr. X is alright in my book.

So being a fan of Lily Tomlin, and by extension, one of this character-driven one-woman show, (which I had seen her do way back in the day, at the neighboring Ahmanson,) and of Cecily Strong’s work on SNL, I was happy to re-visit The Search for Signs of Intelligent Life in the Universe at the Taper. (And so must have Lily herself; she was in the audience on opening night. Cecily beamed as she pointed Lily out in the audience after the curtain call, to which everyone went nuts!) 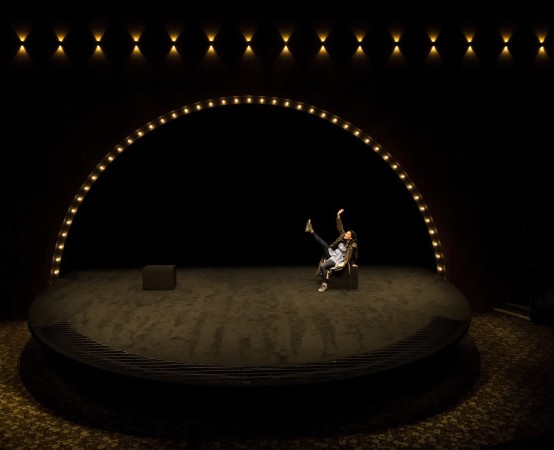 Now as to the play, it was a little yin and yang for me. To be honest, even with my 147IQ, I have never been able to figure-out exactly what this show is about, so all I can tell you on that front is what I’ve read—that it pertains to “the human condition” and that “we’re all connected,” which I totally believe, as well, to an extent. (Here’s my supreme example of why I’m a believer: Several years ago, a close friend of mine from LA was sitting in a dorm room in Israel with a few other students, and described something crazy about an unnamed friend of hers, who was moi, of course. And another girl from an entirely different area in the US said, “You know Karen?!” We’re all still amazed by that connection.)

But The Search for Signs of Intelligent Life in the Universe is comprised of amusing enough little vignettes, and there’s so much to be admired about the writing and performance, (as the plethora of laughter in the theatre attested to,) so I just realized that I don’t have to understand every single thing in life, and I went on the journey with the rest of the audience.

Adding to the overall experience is that the Taper is the perfect venue for this show! (And there’s a fun little surprise on the way out, which I really appreciated.) 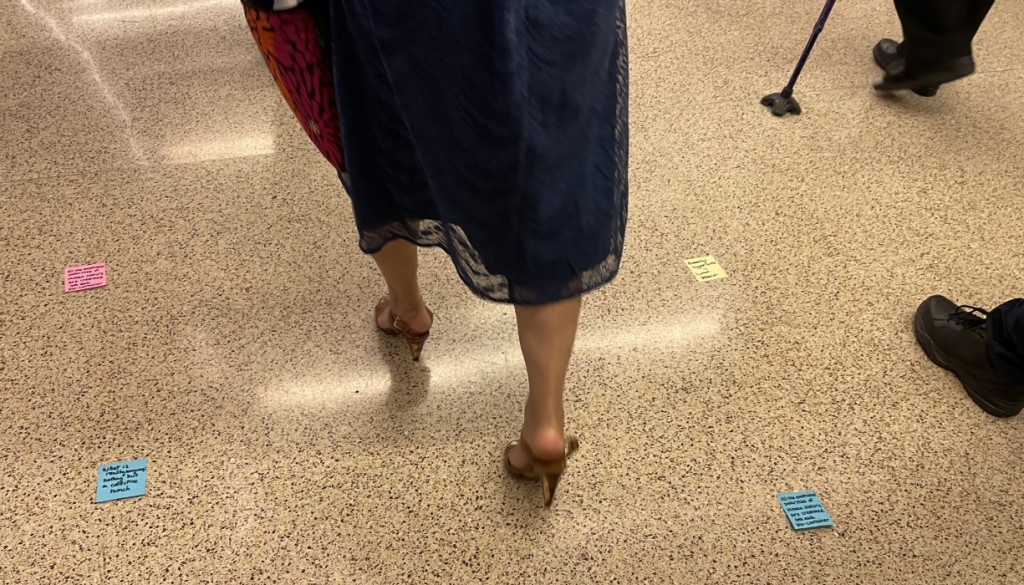 This is a clue to the surprise in the theatre on the way out. Photo by Karen Salkin.

The Search for Signs of Intelligent Life in the Universe features so many clever lines, including something to the effect that the concept of “survival of the fittest” should really be “survival of the wittiest!” I wish that I had been witty enough to come up with that one!

And one character says, “All my life, I’ve wanted to be somebody, but I see now I should have been more specific.” How perfect is that?!

Even if I hadn’t enjoyed the entire presentation, it would have been worth the hour and a half of my time to learn the term “sharing-impaired,” which very sadly, most people are! I adore that! How has no one else ever come up with that before?! 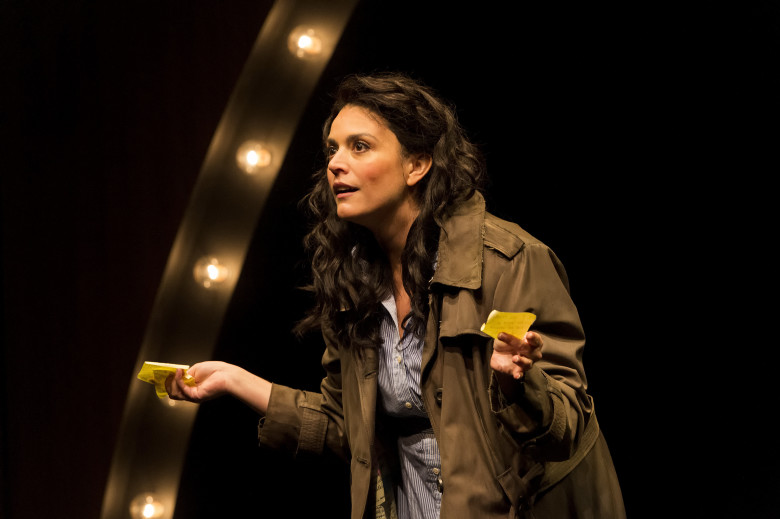 But what I found most impressive in the presentation is Cecily Strong’s precise physicality to the sound effects. That bit of theatricality is so strong that Mr. X, (who has always had the worst memory,) remembers it soooo clearly from the original old-school production. He asked if this version also has “the million sound cues” because he was so intrigued with how technically difficult that aspect of The Search for Signs of Intelligent Life in the Universe is. My mind is still boggled by how exactly that all works.

That brilliance is courtesy of sound designer Jeff Gardner, working in tandem with the director, Leigh Silverman, and Ms. Strong herself. I believe the only props in the show are some post-its, but Cecily’s constant pantomiming of everything from biting into an apple to zipping up a jumpsuit, and even putting a cup away, is timed impeccably to the sounds of each task. It’s all so fascinating. (Okay, on opening night, there was one small instance when it didn’t work, but that provided a hearty laugh, so it was all good. And it showed everyone just how hard the exact timing of those moves really is.)

The ending of the show is perfect, and you know that I always love a good wrap-up; it makes the audience members feel upbeat on their way back into the world. 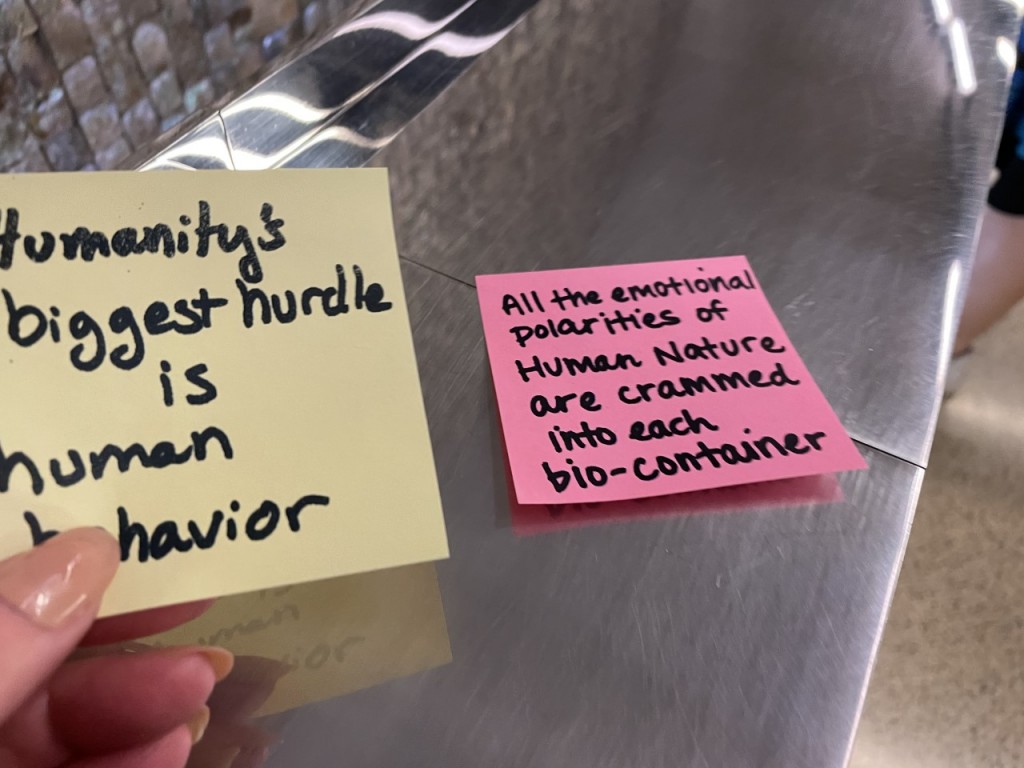 Now I have to admit that as iconic as this show is, there are a couple of small issues for me. First and foremost, there’s way too much talk about suicide in there. In 2022, that topic is far from amusing. And since, as stated everywhere, Wagner “reimagined” her script “for 2022,” I feel that’s the first topic that should have been scrubbed. Just sayin’.

When my friend and I called her teen-age son on the way home, and told him that we had just seen Cecily Strong, he exclaimed, “I love her! Did she do all her characters?”

That’s actually what his mom and I had expected from this show; not her SNL ones, of course, but well-defined and hilarious portrayals. But, although Cecily is a wonderful comic actress, about half the time my friend and I couldn’t distinguish one character from another. Thinking back to the original production, I knew exactly which portrayal Lily Tomlin was doing at each moment. I know that Cecily is more than capable of giving us loads of easily-discernible characters, so this was a bit of a head-scratcher to me. 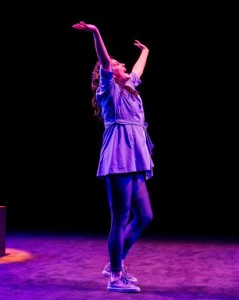 And trust me, she is not at all helped by her confusing outfit! The bag lady coat is spot-on, but why would the costume designer, Anita Yavich, saddle Cecily with that God-awful top and oddly-hued leggings??? I spent a lot of my time in the theatre pondering that question.

And let me caution future audiences of The Search for Signs of Intelligent Life in the Universe–you cannot space-out for even a second or you’ll be somewhat lost, as I was quite often. In full disclosure, the Yankees’ Aaron Judge had just finally hit his record-tying 61st home run before I left for the theatre that night, so, of course, my mind occasionally did wander back to that incredible achievement I had just been fortunate enough to witness. (And I needed to silently thank him for doing it while I was still home, so I didn’t have to worry about him all night.) But every time I gave that feat even a fleeting thought, then focused my attention back to the stage, I found it hard to figure-out just what was going on.

But those few concerns aside, The Search for Signs of Intelligent Life in the Universe is still a worthwhile show. Adding to the overall experience is that the Taper is the perfect venue for the production! (And there’s a fun little surprise on your way out, so don’t rush.)

The only sad aspect of The Search for Signs of Intelligent Life in the Universe is that because of it, Cecily won’t be on SNL for the first month of this new season! And that show needs her now more than ever! Again, just sayin’.

The Search for Signs of Intelligent Life in the Universe running through October 23, 2022
Mark Taper Forum 135 N. Grand Ave.
213-972-4400
www.centertheatregroup.org