Trending
You are at:Home»THEATRE»THEATRE: THE PROM
By Karen Salkin on August 12, 2022 · THEATRE

If you enjoy fun and laughter, (and who doesn’t?,) you must run right out to see The Prom at the Ahmanson Theatre. On opening night, I didn’t want it to end; the second it was over, I wanted to see it again! My friend said the same thing. We both agreed that it’s one of the best productions we’ve ever seen.

Of course it is because it was co-written by Bob Martin, (with Chad Beguelin,) and choreographed and directed by Casey Nicholaw, who are the team who brought us The Drowsy Chaperone, my second favorite show ever! So The Prom was sure to be a winner from the get-go. (I still chuckle when I think of even Drowsy‘s surprising opening minutes.) [Note: In case you’re wondering what’s at the top of my list, it’s Peter Pan because: have you met me?]

Photo by Deen van Meer, as is the one at the top of this review.

Every aspect of The Prom is so superior, that I can’t even decide in what order to laud it all!

After adoring last year’s film version of this musical, (even though I have a feeling that Broadway snobs will cringe reading that,) I was a tad concerned that the stage version, (which came first, of course,) would disappoint me. But not even a minute in, I forgot all that, and just enjoyed what was before me.

The concept, by Jack Viertel, is based on the true story of a gay teen-age girl in Mississippi, (changed to Indiana in the show,) who was banned from prom for wanting to wear a tuxedo and bring a girl as her date. The rest of the plot, about a group of Broadway actors descending on that town to “help” her, is purely fictional. But you never know—with so many cause célèbres these days, it could happen!

The entire cast is marvelous. Courtney Balan, who plays Broadway diva Dee Dee Allen, imbues her role with many clever nuances, selling every second it. So much so that I imagine she probably needs some oxygen afterwards! Emily Borromeo, as the Broadway chorus girl, (whose wardrobe I totally coveted, especially her footwear,) has legs for days, which come in handy for the wonderful number Zazz. And Kaden Kearney is absolutely perfect as the central figure of Emma, the high school student who is banned from the prom for being gay. The ladies are all great, but I had eyes for mainly the guys. 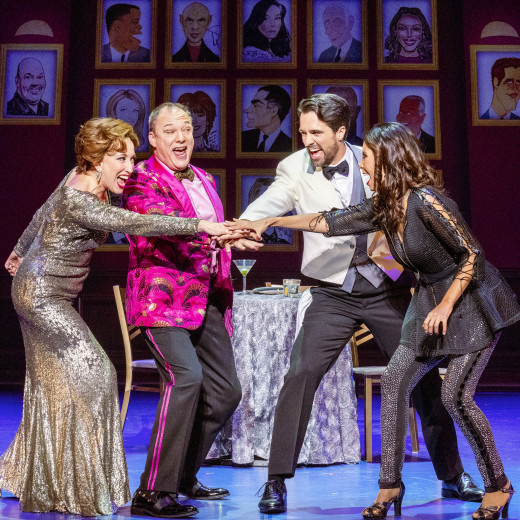 Patrick Wetzel’s performance as Barry Glickman, the gay Broadway star, (isn’t that a bit redundant?,) is both hilarious and touching. I kept thinking that he should play Captain Hook in Peter Pan one day. He’s the first man I’ve ever said that about, which you know is a major compliment if you saw my note near the top. Before I read his bio, I would have put money on that he had played that iconic role somewhere along the line already, in addition to either of the leads in La Cage aux Folles. How has he not? He needs to get booked for one of those when his run in The Prom is over.

And I went nuts for Ryan Reynolds look-alike Bud Weber who plays Trent, a waiter who manages to mention that he went to Juilliard at just about every juncture. His energetic Love Thy Neighbor with the incredible young dancers made my face hurt from the smile that wouldn’t quit during it. No lie.

Shavey Brown, who plays the press agent for the actors, states in his program bio that he’s “so excited to be going to prom again!” And you can tell that in the last group number—I couldn’t take my eyes off him! His dancing is the best!

Speaking of the dancing, the group numbers are perfection! Casey Nicholaw’s choreography is wonderful and spot-on—it’s hip and now, without giving the audience a mental hernia watching it. And the ensemble sells it all beautifully; the joy on their faces when performing is heartwarming. 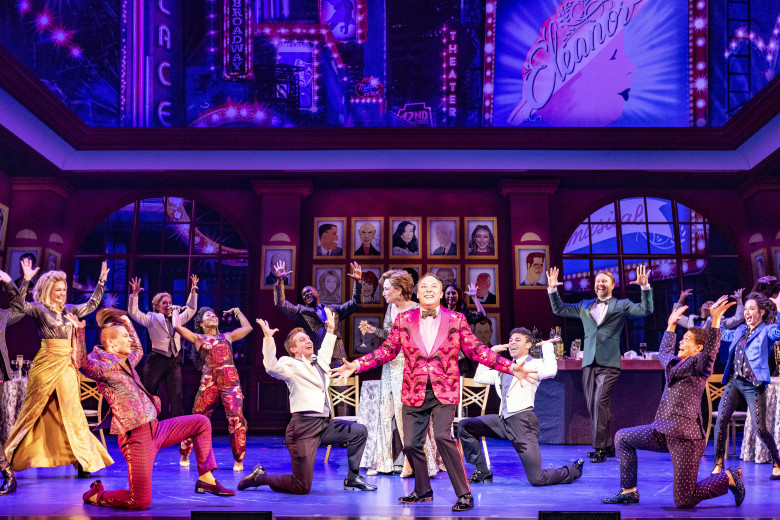 Every musical number in The Prom has something to recommend it, even the quieter ones. But, of course, as expected, my favorite is It’s Not About Me! But it had me wondering: which came first—that song or the title of this e-zine??? (Yes, I know the answer is my e-zine, but no worries—it just proves that great minds think alike! And for me to match mine to that of lyricist Chad Beguelin made my year!)

The costumes by Ann Roth, (who was eighty-two when she designed these very many stylish, colorful, and sometimes amusing outfits!,) and Matthew Pachtman are tons of fun. They could have just raided my closets, (or at least one of them,) especially all my sequined sneakers, at least one pair of which I wish I had thought to rock that night! 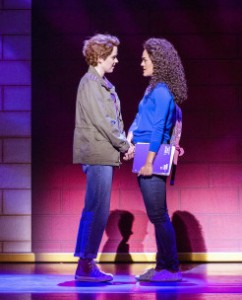 Kaden Kearney and Kalyn West. (I love all the “K”s, of course!) Photo by Deen van Meer.

One thing I super-appreciated about The Prom is that it’s not trying to be artsy, like so much of Broadway is these days. It’s an honest-to-goodness, riotous, incredibly well-written-and-performed real musical comedy. Just with a modern-day problem at its core.

And the inclusion of the fictional cast of a touring company of a famous Broadway musical into this narrative is downright brilliant. I almost choked from how hard I guffawed when they appeared. (I’m not naming that musical because I don’t want to spoil it for you.)

The entire two-and-a-half-hour presentation went by in a flash! I didn’t check the time even once, which I think must be a first! On the way home, my friend compared it to another production of the same length we recently saw, saying that The Prom was at least an hour shorter! I had to tell her that no it wasn’t—it just seemed so because of its excellence.

Now a few words about the auxiliary fun of seeing the show. First of all, it was great to be back at the Ahmanson! After not missing a presentation there in probably two decades(!), I’ve been to that theatre only once, (four months ago,) in two and half years! I’m still a bit worried about being so close to people, but there was no way I was going to miss The Prom!

And as far as safety goes, I’m thrilled to report that they still require masks be worn at all times, and on opening night, I didn’t see even one person remove his or hers. I love a cooperative audience! (I also didn’t smell, or feel, any perfumes, which could mean that patrons are finally heeding the ask in the front of their programs!) 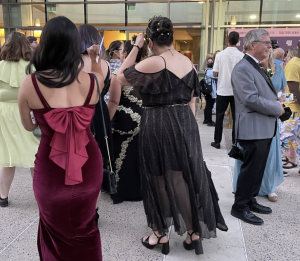 Some of the prom-attired peeps on Opening Night of The Prom at the Ahmanson Theatre. Photo by Karen Salkin.

And I loved, loved, loved that so many audience members wore prom attire, some even including sashes! And…tiaras! I, of course, possess all that gear, and thought of wearing it myself, because I still love playing dress-up, but I was worried that I would be the only one so attired, (like when my mother, by accident, had me wear my Halloween bride costume to kindergarten…a week early, which scarred me for life,) so I nixed the idea. But my friend and I should have gone for it, as I hope many of you do when you go see the show. It adds something special to the overall experience.

But hurry—The Prom is at the Ahmanson for only four-ish more weeks. (And their Oklahoma opens only two days after that! Anyone who knows how productions work has to be amazed at that almost non-existent turnaround time!) And maybe I’ll even see you there if I get to go again. In sparkly sneaks and a crown this time.