Trending
You are at:Home»THEATRE»THEATRE: THE PETRIFIED FOREST
By Karen Salkin on March 27, 2014 · THEATRE

As many of you know, or have figured out by now, I rarely review L.A.’s “little theater” shows anymore. There’s just not enough time, and sadly, most of the ones over the years that I have reviewed proved to be a waste of the little time I did have. 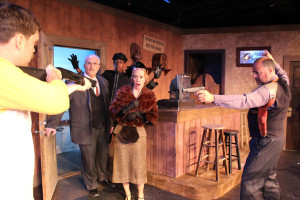 Some of the cast, with Jeanine Anderson in the middle. (But what is the guy on the left wearing?!) Photo by Charlie Mount.

But an actress I’ve known of for many years, Jeanine Anderson, is in the The Petrified Forest at Theatre West in the Valley, and having followed her career for quite awhile, (she’s been a recurring character on Glee over the past few seasons,) I decided to go see this one. [Note: It was at the same time as UCLA’s first game in the NCAA tourney this year, so how nice a supporter am I to have left the house that night?!]

And I’m glad I did because most of the show was excellent! And I always feel that we in Los Angeles should support local theaters, especially with film production leaving this city in droves. We have to support the arts, people!

First a word about this theater group, in general. I love that it feels sort-of like a community theater out of town. They had a man standing in the lobby to greet everyone, and there was even a raffle before the second half began. I love stuff like that.

The theater itself is not even really “little;” I think there are well over a hundred seats. (My friend and I tried counting them, like idiots.) And sight-lines are pretty good. And there’s a nice, comfortable lobby.  And let’s not forget the free parking across the street! That’s a bonus anywhere in LA! [Note: You really should check-out their website, at the bottom of this review, to see their whole stellar history.]

The mood for The Petrified Forest, which takes place in the ’30s, was created before we even stepped inside the theater; they had a 1937 Oldsmobile parked outside, courtesy of the Peterson Automotive Museum. I love old cars, and this one was a stunner.

Then there was Frank Sinatra music playing in the lobby. It cracked me up a little because the song that was on when I entered was Christmas Waltz, which had nothing to do with this play, nor the time of year in general, but I have a clock at my house that plays a little Christmas ditty every hour on the hour, (even now in March!,) so Frank’s song made me feel right at home.

The 1937 Oldsmobile out front. Photo by Flo Selfman.

As we took our seats, we noticed laundry hanging on the front of the stage. When the lights went down, we were treated to a montage of 1934 America projected on those sheets. Clever touch.

Then the clothesline et al were gone with the wind, (in the desert, where the play takes place,) and the excellent Jeff Rack-designed set was revealed. It was perhaps the best I’ve ever seen at a smaller theatre! It needed brighter lighting, though, because it’s hard on the eyes to look at a too-dark stage.

While we’re on the technical aspects, I must tell of my confusion over one of the character’s wardrobe, (that many other audience members shared with me at the theater.) The character of Boze, the young guy working at the gas station where the action takes place, was wearing a way too modern outfit. I’m not an expert on 1934 attire, but I do watch a lot of old movies, including The Petrified Forest itself, and this guy’s wardrobe kept bringing me back to now.  It seemed like they thought if they cuffed his jeans’ hem, that would make the outfit vintage. They were wrong on that count; my friend and I both thought he had forgotten to change into his wardrobe for the show!

Now to the production itself, which was well-directed by Laura James, especially for such a big cast of over a dozen actors. Impressive job.

The play actually finally began, for me, about twenty minutes in, when John DeMita, as a no-count sometime writer, began eating and talking. (He looks of that era, too.) He even made Leona Britton, the woman who plays his eventual love interest, come to life. The action, and acting, totally picked-up from there, and never got dull again.

If they can possibly change things now, I’d suggest they seriously shorten the action before Mr. DeMita’s entrance because it all serves no purpose whatsoever. There’s no exposition even; it’s just chatter for no reason, without any good acting, to boot. But, from that very entrance, the entire play goes uphill, and the performance of Ms. Britton and Jack Kutcher, as her grandfather, improve drastically. [Perhaps the deal with the company who licenses the play has a clause that it has to be produced as written, which would explain the first totally unnecessary, and utterly boring, twenty minutes or so.]

As a matter of fact, Mr. Kutcher, Mr. DeMita, and the aforementioned Jeanine Anderson were the highlights for me. Jeanine was a riot, hitting all of her many entertaining lines just perfectly. She plays the part of an indignant, wealthy matron, who loosens up with danger and drink, for everything its worth, and provides much of the humor of the evening. As does David Mingrino as a gangster in the second half. We laughed at just about everything he said. (There wasn’t a lot of mirth in the film version, so I’m glad this production found it, with the very same lines!) 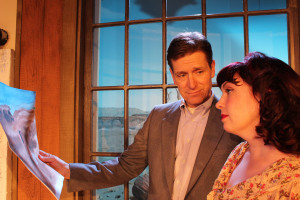 When Leona Britton got going,in a much more dramatic turn, she was good, too, and I really enjoyed her old-fashioned way of speaking, with thick “R”s, that’s just perfect for that era. She would have been a big star in the ’40s.

But the one problem with her playing the role of Gabby in The Petrified Forest is that she’s way older than the part, so it can be a tad confusing, especially if you’re not familiar with the story. The character is supposed to be a starry-eyed young lady, and Leona Britton is much more mature, shall we say, than that. I’m not saying anything bad here because one’s age is no reflection on their acting ability; it’s just that casting a person of the incorrect age range for a role changes the action. But, again, she was very good; they should have just cast someone no older than her twenties. So, since I’m highly recommending that you see this production, I just want you to know that going in, so you won’t be as confused as several of us were on opening night.

Now, I must laud, and thank, the lovely, accommodating personnel at Theatre West for something personal they did for me, and trust me, they didn’t know me from Adam. (Is that even still an expression? I think the era of the play has rubbed-off on me!) Towards the end of the first half, I noticed I was beginning to feel a little dizzy and nauseous, and I realized that there was a strobe light going off in the background, center stage. Knowing that they can cause seizures, I tried to block it out with my hands, but that proved too difficult. So I went out to ask the people in the lobby if it would stop soon. And then all of a sudden it was intermission, during which we audience members were all asking each other what the strobe was even for. Several of us figured that some light must have shorted-out backstage, and that was causing the problem.

It turns out they were doing it on purpose, hoping that it would look like a neon sign in the desert, which it really didn’t at all, but that’s besides the point. They planned to keep it on during the entire second act, so I disappointedly said that I would just have to sit out in the lobby while my friend finishes watching the show. Believe me, seeing a play is not worth ruining one’s health. Just then, the lovely and kind director came up to me and told me that they had nixed the strobe, so I was safe to see the second half. I really appreciated that because some theaters could get really righteous about something so unimportant to the story. And I’m really happy I got to stay for the second half because it was excellent!

Now, I have one little bone to pick with them on an auxiliary issue. As I alluded to yesterday in my review of A Song at Twilight, (which you can read here if you missed it: itsnotaboutme.tv/news/theatre-a-song-at-twilight,) I just can’t understand why any theater, especially a smaller one, would have any kind of smoke on-stage nowadays, be it tobacco or even herbal.  So many people have breathing issues in this day and age that it’s just crazy! In this particular production of The Petrified Forest, there’s one point in Act II where one character is smoking a pipe while another one is smoking a cigar. Both acts are totally unnecessary, but if the powers-that-be feel that they are, why not just have the actors chomp on the cigar and puff on the pipe with nothing in it?!  Nothing else in a show is real-life , so why do people think smoking has to be?  If a script said to torture a dog or cat, (which I saw in a play at at the Taper four years ago,) would the actors have to torture a real animal?! I think not. And, do they use real bullets when shooting guns, like in this play? No again. (I hope!)

So, I just had to say something on this topic because, having asthma myself, it always pisses me off when I get physically sick over something so unnecessary on a stage! And I felt I had to warn my fellow breathing-issue-sufferers. (But just sit in the back, cover your nose and mouth for a few minutes, and you’ll get through it easily enough, as I did.)

Okay, now that my little smoking rant is over, let’s sum up this production of The Petrified Forest. It’s something different, and entertaining, to do on a week-end, and is a well-done, classic play. And it’s affordable, too. Best of all, the story will make your own life seem great, no matter what’s happening in it! So it’s a win, all the way around.