Trending
You are at:Home»THEATRE»THEATRE: THE ORIGINALIST
By Karen Salkin on April 18, 2017 · THEATRE

In the midst of this horribly depressing political climate comes The Originalist, a play about the late Supreme Court Justice Antonin Scalia, whose creepy successor, Neil Gorsuch, just took his place yesterday. (In another coincidence, or not, Scalia died just a little bit over a year ago.) I almost didn’t attend the opening night because even hearing the words “Supreme Court” these days makes me feel sick to my stomach.

But I’m glad I shoved those feelings down and saw the play, anyway. I would hate to miss any production at the Pasadena Playhouse; I love that classy theatre! 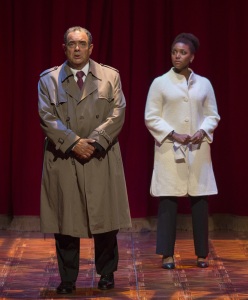 I decided to take this opportunity to delve into Scalia a bit, not just because of the venue, but also due to the strange fact that wonderful Supreme Court Justice Ruth Bader Ginsburg considered him a close friend, so perhaps there was more to him than met the eye. (By the way, I’ve never understood their out-of-the-court friendship, not even a little bit. I don’t know how normal people like Ruth can be friends with anyone who thinks like Scalia did. Just as I absolutely cannot wrap my head around the marriage of prominent Democrat James Carville and his equally famous Republican wife, Mary Matalin. I had to unfriend my few Republican pals from Facebook, so it’s a puzzlement to me that a liberal person can be married to and/or friends with someone who thinks so crazily! And don’t even get me started on how lovely Maria Shriver could have been married to Arnold Schwarzenegger! He was a big fan of my show, which was something I was proud of, but as soon as I realized his political leanings, I had to not be happy about that situation anymore. But now, with his obvious hatred of Trump, I’m beginning to accept him again.)

Even though Scalia is considered to be one of the most polarizing Supreme Court Justices of all time, he’s nothing compared to the possible evil that’s upon us now.

All that being said, I decided to approach The Originalist with an open mind, and take the work on its own merits, rather than hate it because the subject is someone for whom I have such disdain. . [Note: Antonin and I actually have a lot in common, I’m almost ashamed to say. We both grew-up in New York’s outer boroughs, with teachers for parents, both of our fathers taught in Brooklyn College, and that was my first college, too! And we both excelled in school, although I have a feeling that he was a lot smarter than I. (I share an embarrassing story about that near the end of this review, so you’ll understand why I say that.)]

And The Originalist is not exactly about the real Justice Scalia, per se. The man in this play is more of a fictional character based on him, using excerpts from his actual dissents and opinions as part of the script, just to remind us of how stuck in the very distant past he was. (That last part is my interpretation of his writings, not those of the playwright. That I know of, anyway.) 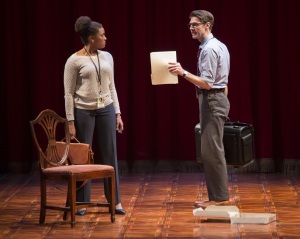 To make sure this review is fair, I just re-watched Scalia’s 2008 interview on 60 Minutes, and he did, indeed, describe himself as an “originalist.” As this play defines that label for us, it means “to interpret the Constitution as it is written and as it was understood when its authors crafted the original document.” Hey–way to come into the 21st century, Antonin! Or even the 19th!

This hour and forty minutes play that was inspired by the late Justice is entertaining theatre, no matter your political thoughts or affiliations. The excellent writing, by John Strand, is very compelling, and gives the three characters plenty of witty banter for us to enjoy.

But what a difficult assignment for these actors, to learn all that legal jargon!  I’ve never understood how lawyers can do it all, but that’s their job—they studied hard to do it.  But (most) actors did not. 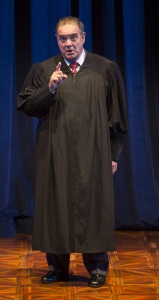 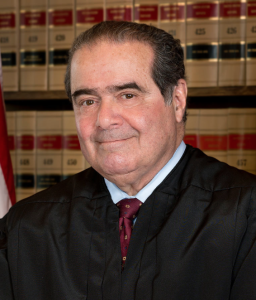 I got a kick out of seeing that Ed Gero, the actor who plays the judge, looks just like him!  Great casting, although his excellent acting job makes Scalia seem charming, which I certainly did not find him to be. But, as a character in a play, Ed’s comic timing is spot-on, so he’s fun to watch.

And there are many great quotes along the way. My favorite, which is said by the Scalia character, is, “I’m not afraid of being wrong; I just value being right.”  That’s exactly how I feel. (My friends think that I have to be right all the time, but they are incorrect. I don’t have to–I just am!)

I was happy to be in a politically-knowledgeable audience. There was hearty laughter all night, and in all the right places. I had the feeling that I was among a group of people who are as miserable about Orange Hitler being in charge of this country now as I am. (And that’s pretty miserable. I understand that laughter is supposed to help us in these uber-difficult times, but it’s not really working that way with me. I’m in a perpetual state of fear and horror.)

One interesting aspect of The Originalist is that the Scalia character does what is basically an opening monologue. And to make it further amusing, he performs it with the house lights on at least halfway, so the audience can feel like they are in one of his speeches or lectures, which is what the scene actually is.

Even if you share my distaste for the real Scalia, (or maybe especially if you do,) The Originalist, which imagines his sparring partner/mentor relationship with a first year law clerk, is worth seeing. 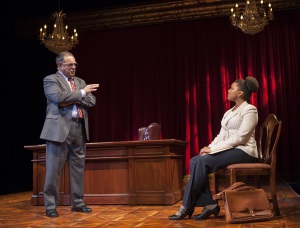 There’s only one tiny weakness in the entire production, and it’s a small matter of staging.  When the clerk, played by Jade Wheeler, talks to her (unseen) father, who, it turns-out, is supposed to be in a hospital bed, she keeps looking at the floor, rather than somewhere at bed height.  She does that in a few scenes, and it took me forever to realize the dad is in a hospital; I thought she was supposed to be sitting on a bench in a graveyard, for her to be looking down to the ground like that. (I wondered why I was hearing faint bells in those scenes; I thought that they were maybe from a cemetery church, rather than hospital machines.) Several audience members mentioned that anomaly to me, as well, after the show, so I’m not the only one who was confused by that physicality.  Perhaps that should have been caught in rehearsals. (But let’s hope the situation is fixed by the time you see it because it’s pretty distracting. I spent so much brain power trying to figure out what was going on in those scenes that I missed what she was saying.)

In the play, the judge says that he puts “a lot of stock in good writing.”  That one little sentence reminded me of my own horror story about my college writing, which I’ll share here with you quickly. For my very first writing class in my very first college, I was advised to choose the wife professor of a married teaching duo. But, by accident, I signed-up for the husband’s class. I met him while doing so, and being the Empath that I am, I didn’t want to hurt his feelings by asking him to transfer me to his wife’s class, so I naively asked if he sometimes gave good grades. He answered in the affirmative, and added as long as a student writes well. I told him, “Oh, great; I’m a really good writer!”

When I wrote my first paper in that class, on The Catcher In The Rye, and passed it around the cafeteria to my friends before class, they were all in hysterics. It turns-out that I have always written the way I do now, which—don’t worry–I know is a bit different from the norm. And it was not at all the way that college papers were supposed to be written back in the day. (And, actually, probably not now, either.)

So, before I handed it in, I printed this at the end: “I was only kidding when I said that I write well.” And when the professor returned it to me, he had written in red, next to my confession: “Yes, I know.” And then he added, “You write like you talk.” Duh. I’m assuming that he would not be a fan of this e-zine, either. Double duh.

So, I guess that I, too, am an originalist, of sorts, only in a very different definition of the word than the one Scalia went by.

No matter what that word means to you, I’m recommending that you see The Originalist, and decide for yourself. Even if the subject matter is anathema to you, on either side, I’m pretty confident that you’ll still appreciate the ever-present humor.