Trending
You are at:Home»THEATRE»THEATRE: THE MOTHERF**KER WITH THE HAT
By Karen Salkin on July 29, 2014 · THEATRE

THE MOTHERF**KER WITH THE HAT

I really wanted to like this play. And I did—to a point.  I’ve been wanting to see it since I first heard it’s crazy title when it was on Broadway three years ago.  Some of that desire on my part had to do with the colorful moniker, but most of it had to do with that New York cast.  I love me some Bobby Cannavale and Chris Rock!  How could it not be a laugh riot with guys like that?!

But it wasn’t, at least not in this production at The Lost Studio in Hollywood. This L.A. cast is comprised of all good actors, (the three men in the show each have film and television credit lists that take a day to read!,) but no one comes close to what I imagined those original two to have created, whether or not my assumptions are correct. 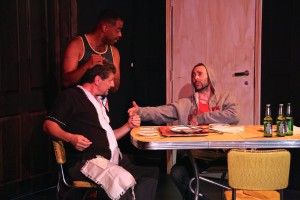 The lead guy, Christopher Amitrano, did grow on me, though.  By the end, I was a fan.  Of his, not the play itself, nor this production.  Still, if like me, you’ve been interested to see The Motherf**ker With The Hat, and you live in/around the area, this is your best chance. It’s entertaining enough, but there are several slight negatives, that all interfered with my enjoyment of the show on opening night.

The worst part of this production at The Lost Studio is the staging; it’s all wrong.  This Equity Waiver theatre has the biggest stage area of all the little theaters around town, (that I’ve seen, anyway,) yet the crew moves the set between every scene, rather than leaving the few pieces of furniture set-up in the three different areas used, and lighting them accordingly.  All that superfluous movement is ridiculous. But at least they play good music during each black-out for the change, so there’s that.

Speaking of the theatre itself, rather than the play, it has horrible sight lines.  I couldn’t see over the giant head of the man in front of me, so the show was almost like a radio play for me.  They should have staged it all much further back, so it would be easier for everyone who was not in the front row to see, especially because they had several parts of scenes on, or near, the floor!  It was extremely difficult to get a consistent visual going. (And, because I actually care about people who sit behind me, I felt awful that I had to keep moving my head to try to see around the man’s. That took a lot of my attention away from the action on stage.)

And then, I could barely hear the actors over the air-conditioning, but we all would have died if they had shut it because it was so hot in there. So, that’s a conundrum. Have a bunch of dead audience members who can hear, or alive ones who have to try hard to make out much of the dialogue. Toss-up?

The play is more about the journey than the destination, which is fine with me.  It did keep me wondering how it could possibly be resolved, which was a good thing, but then it just kind-of ended, which I didn’t like.  I never want to continue a script on my own–that the playwright’s job, not mine.

And, if you’re not a fan of the F-word, this is the wrong show for you. I actually didn’t mind that at all, and knew it was totally necessary. I’m from New York, so it was no biggie whatsoever. (As a matter of fact, after spending a day with Mr. X and me once, one of my pals declared, in her inimitable Brooklyn accent, “It’s not like you guys are even fighting; it’s more like you’re just cursing each other out!” And? Your point is???)

Here are the final two problems with this production: They say it’s an hour and forty-five minutes, with no intermission, but we had it clocked at closer to two hours. It can easily lose a good fifteen minutes or so. The other is that they have a black actor play the cousin of the main dude who’s white, (or maybe Puerto Rican?,) which is a tad confusing. I didn’t know if that was supposed to be part of the story or not, so it distracted me quite a bit. They were both excellent, though, so I guess that explained the casting. (And you all know that I can’t wait for the day when I can star in A Raisin in the Sun, don’t you?! That won’t be too confusing, will it?)

Speaking of the actors’ abilities, I have no complaint in that category. All five of them were of a much higher caliber than I’ve seen in other Equity Waiver productions around town. None of them pulled me out of the action. (I would have just liked to see them better, to really enjoy their performances to the hilt.) [Note: None of the actors’ credits are in the written programs, which, though clever, is a bit disappointing. They instead have their “gratitudes” listed. Trust me, I’m the first one to appreciate gratitude of any kind! I would have just liked to see their careers get their printed due, as well.]

The story itself, about a recently-released-from-jail-druggie, (courtesy of playwright Stephen Adly Guirgis,) is kind-of interesting. The opening night audience had some good laughs, and even I had a few.

So, if the purpose of the show is to showcase good, professional actors, (for example, Alex Desert, who plays the cousin, was a regular on Becker,) and entertain a hip-enough audience, it accomplishes all that. And, for the low price, it’s a great week-end night of entertainment. Just get there early, so as to get the best seat possible.