Trending
You are at:Home»THEATRE»THEATRE: THE LIEUTENANT OF INISHMORE
By Karen Salkin on July 22, 2010 · THEATRE

THE LIEUTENANT OF INISHMORE

I saw this awful play before Clarence got sick, so that fact did not color my opinion of this story about a dead cat and blood and gore. Clarence’s poor health had nothing to do with my dislike of it. The topic, much of the writing, and the extreme graphic violence were my problems with it. And, although it was a comedy, I laughed only twice, and those were pretty much out of desperation. 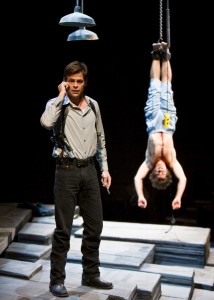 See what actors have to go through roles nowadays! Seriously, that one guy did his entire part hanging upside-down like that! Photo by Craig Schwartz.

As you may know, I don’t like to know what plays and movies are about beforehand; I like to experience everything as new. I did know it was a black comedy, which I’m rarely fond of, but the title, The Lieutenant of Inishmore, did not have me conjuring up the death and destruction that unfortunately befell my eyes on opening night at the Mark Taper Forum.

To be more than fair, the opening night audience did seem to enjoy the show. There was lots of laughter, but also a lot of moans, as in “Oh no you didn’t!” I don’t know if the reactions were those of true enjoyment or just strangers being uncomfortable.

That being said, the acting was all excellent, so that was a bonus. But the writer, who doesn’t even deserve his name to be mentioned, should be, at the very least, slapped. To foist up-close and personal scenes of horrific torture and human mutilations on an unsuspecting public is just downright sick. He should have worked out his issues in therapy and not wasted our time. No one normal could have come up with this one!

The one saving grace was that, as it was set in Ireland and the actors affected the appropriate accents, I could make out only about half of what they said. Including about five hundred instances of “fecking.” Enough already.

As the second act wore on (and on and on,) one of the characters exclaimed, “Worse and worse and worse this story gets!” I could not have agreed more. Then one of them uttered, “Will it never end?,” just as I was thinking the very same thing! This two hour show seemed to me to be about five hours long.

The whole thing was just so dreadful, on every level, including the way-too-dark put-people-to-sleep lighting, that I don’t want to waste more time on it than I already have. Except to laud the lovely family of Cobe Getzug, the young guy in the play, who was basically the second lead (behind Chris Pine.) Here’s the story: 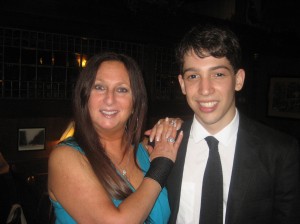 Karen with one of the stars of the play, Cobe Getzug. Photo by Micah Getzug.

I had, by chance, met his lovely grandmother before the show, and was therefore looking for a teen-ager in the play. Though I believe Cobe is just that in person, his performance had a very grown-up, professional-for-many-years quality to it. If I hadn’t known better, I would have thought the actor I was seeing on stage was at least twenty-six. His acting is very mature and well thought-out, and made me actually a little proud to have made his grandma’s acquaintance.

Then, the woman with fabulous shoes who sat next to me turned-out to be his agent, and then that turned-out that she’s at the same agency I had been with for variety work for years! So, I felt like it was people I already knew somehow. Then, at the wonderful (except for someone breaking a glass that sent several shards into my legs) after-party, I got to meet Cobe and he was every bit as darling as his acting was admirable. I also met his mom and younger (if that’s even possible) brother, Micah, who is now my new best friend because he’s as interested in sports as I am.

So, to sum-up: loved the acting, absolutely hated the play. Loved the food at the McCormick and Schmick’s party, hated the shards in my legs and the red wine stains the glass-shattering forced upon my favorite dress. Love Cobe Getzug and his fam, hated the rude guests who kept putting their debris on my table. That about says it all, except for that I really wish that the memory erase pill was already invented, because I would have instantly swallowed a whole bottle of them after this one!