Trending
You are at:Home»THEATRE»THEATRE: THE HITCH-HIKER’S GUIDE TO THE GALAXY
By Karen Salkin on June 11, 2019 · THEATRE

THE HITCH-HIKER’S GUIDE TO THE GALAXY

I hate to say it, but this is the most off-target production I’ve ever seen at The Wallis. Luckily for you guys, it played this past week-end only, so there’s no chance of you also wasting your time on it. 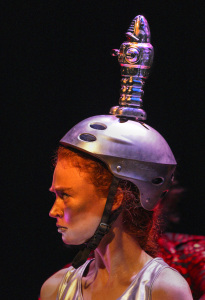 Lucia Towers. Photo by Lawrence K. Ho, as is the big one at the top of this page.

I still applaud The Wallis for bringing us such a broad range of entertainments, and for giving young people an opportunity like this one; The Hitch-Hiker’s Guide to the Galaxy was produced by The Wallis Studio Ensemble, which is a theater company for “early-career actors.”

That nescience was definitely on display here; this particular group has so much more to learn–everything about their performances was wrong.

The entire presentation was like one of those bad high school presentations on Saturday Night Live, where the students think they’re being so profound. But at least the kids on SNL are funny! That’s what this show is supposed to be, but sadly, it missed the mark.

The Hitch-Hiker’s Guide to the Galaxy began as a comedy science fiction broadcast on BBC radio in England back in 1978, when hippies were busy asking each other if they “grok.” People probably listened to it while on LSD. So that might explain the popularity and the longevity because this production definitely did not!

Since the series et al has such a loyal cult following, obviously The Hitch-Hiker’s Guide to the Galaxy, in general, has many fans. I don’t think it would have been my cup of tea, under any circumstances, and this offering did not alter that point of view. There was so much opportunity in this often-produced show for fun and merriment. But none of it ever came to fruition here.

I researched it later, to find-out what I had just seen, (since these actors did not give me even a clue,) and it turns-out that, after the radio program, it was turned into several other forms, including novels, comic books, a TV show, a video game, and even a not-too-long-ago movie. So I guess there are audiences who are interested in this tale. (But first you need to be able to decipher what the actors are saying.) It’s considered to be in the lonely category of “comedy science-fiction,” two other aspects you could not tell from this production. 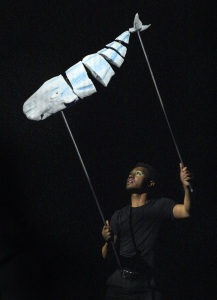 As to the performances, every single member of this big cast tried way too hard.

Because the original radio show was in England, several cast members tried to affect a British accent, but none too successfully. Just because it originated in England all those years ago, there was no need for them to use English accents. Most of the action takes place in Outer Space! But they did not do alien accents, (or was that were they doing?,) so they needed to drop the bad British ones! I’ve honestly never before seen an entire cast I did not understand! (At least a few of them finally gave up on their clumsy attempts pretty quickly.)

The most guilty of them was Schuyler Girion, who played the Narrator. She was absolutely not trying to help us understand anything she was saying–she appeared to be too busy being impressed with her desperate fake English accent and not-straight-standing self. (But it’s unknown how much of the fault may lie with Madeleine Dahm, the director, who allowed or encouraged the synthetic performance.)

Also annoying was that the cast walked among the audience every now and then. And I have to advise that it was not smart of them to throw a giant ball into the audience; even had it been lighter than it looked and sounded, if it had hit someone, the Wallis would have a new moniker, if you get my drift! 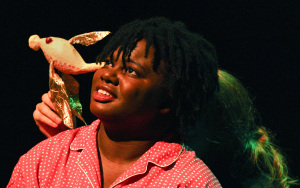 I always try to find something positive to say about everything I’m reviewing, so here are a few of those happy thoughts: The two actors who played twins (or something like that,) Kelvin Morales and Helya Salarvand, spoke pretty much in sync the entire time, which my friend was impressed with. And the occasional dancing was pretty good, especially by Tecey Dory and Viva Kanani Obiajulu Wittman, who I could tell was a dancer right away. (But girlfriend may have to change, or even just shorten, her name! Just sayin’.) The few tiny bits of taped music were fun. (And a relief from the rest of it!) There was one good visual effect, with a disco ball. And my friend got a kick out of the very upbeat Siera Williams, who played Martha Dent, the main character. And one actress, Bernadette Sullivan, had a pretty voice, although we didn’t see her. (I think she played an unseen computer.) She was actually the only person I understood all night. She sounded kind-of like Kathy Lee Gifford, so I’m pretty sure she’s a grown-up.

And at least I was able to entertain myself during the interminable hour and forty minutes by making a mental list of all the activities I would rather be doing, like having a root canal. Or being chased by wild dogs. Or listening to Fergie sing that infamous National Anthem again.

And I must say that The Hitch-Hiker’s Guide to the Galaxy has one distinction—it now outranks the awful Tiny Beautiful Things (which was recently at the Pasadena Playhouse) as the most disappointing show I’ve seen in years! So there’s that.

On to the next, Wallis! No matter what, I’m always happy to explore all theatre possibilities with you!