Trending
You are at:Home»THEATRE»THEATRE: THE HEART OF ROBIN HOOD
By Karen Salkin on December 8, 2017 · THEATRE

THE HEART OF ROBIN HOOD

The fun in The Heart of Robin Hood begins as soon as the first actor makes his entrance by sliding down the height of the set, from the top of the backdrop all the way to the stage, a device that is used often from then on, to my delight. That humongous, centerpiece “sliding pond” (as we New Yorkers call it,) is just one of the many innovations in this very different version of the Robin Hood legend. 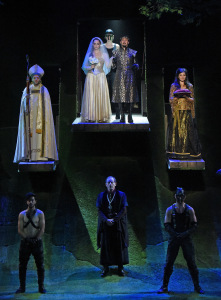 Photo by Kevin Parry for The Wallis. The big photo at the top of this page is by Luke Fontana.

I was entertained throughout, despite the first act being about fifteen minutes too long. There’s a plethora of set, and physical, surprises, many of which I’ve never seen anywhere before. You really can’t avert your eyes, or let your mind wander, for even one second, or you’ll miss something fabulous!

The Heart of Robin Hood is playing at The Wallis in Beverly Hills, one of my favorite theatres in town. The seats are the most comfortable ones ever, and, as Mr. X pointed-out, there are no bad sightlines. Unlike the horrible Microsoft Theatre downtown, you barely even know that anyone is sitting in front of you here!

I have to admit that in my whole life, and despite having two literature teachers as parents, I never got into the myth of Robin Hood, (if there even is a definitive one, after having become a British folklore hero in the fifteenth century or so.) Tales like this are sooo not my cup of tea. But I wanted to see The Heart of Robin Hood not only because I so love The Wallis theatre, but also because I saw some photos of the show, and the lushness of the set called to me. And I was definitely not disappointed in it in person, as I often am. So, even though I usually eschew new takes on classic narratives, I was able to go with the flow on this one. 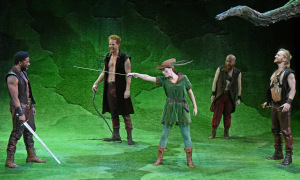 And I was rewarded with a visually stunning, very funny, inventive, dare I say cutting-edge, creation. If I had to describe this unusual offering, I’d say it’s Shakespeare meets Monty Python meets The Matrix, with a dash of Dame Edna thrown in for good measure.

But I didn’t care about the story at all here, (which is good because it’s somewhat iffy.) Rather, there were several other aspects of the show that got my attention, and admiration, as well; I disliked only the horrible murders and mutilations, which, very thankfully, are not prolonged.

So, here’s what I am a fan of about this production. First of all, as I mentioned above, I adored the theme park’s worth of surprises in the beautiful Borkur Jonsson-designed set. I won’t describe them here so that you can experience them for yourself, except to label them “Cirque du Soleil light,” which is still a really good thing. 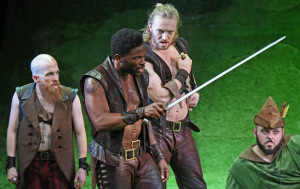 Next, on a very shallow note, Luke Forbes is the hottest Robin Hood ever! (Although I do have to admit that, no matter how athletic the feat, or herculean the effort to hang upside-down for five minutes at a time, it’s really painful to me to see a black man hanging upside-down from a tree ever, but especially now, with all the discord in this country. That image was really jarring to me, even though it was just a coincidence in this show, without the usual horrific meaning being assigned to it here.)

Back to shallowness now. I was so happy that the entire cast features more great abs than I’ve ever seen in one space, even in my recent clubbing days, where my group of guy friends looked like models. I would have loved to be in on these casting sessions!!! (Is that too Harvey Weinstein-esque of me to say?!) 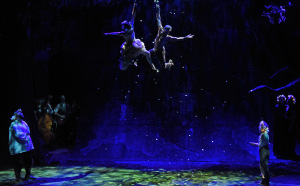 Some of the beautiful aerial work. Photo by Kevin Parry for The Wallis.

Despite all that eye candy, and attendant phenomenal physicalities, my favorite performance (as I think everyone’s must be,) is that of Daniel Franzese. Yes, the playwright gave Maid Marion a chubby, fop-ish bestie, but it could have gone really south with a different actor in this juiciest of roles. Daniel is a laugh riot who hits everything just right. His portrayal is spot-on.

I usually don’t like music in a show for no reason, (because this is not a musical, but rather, a play with a band and singer that have nothing to do with the scenario, except to sing about it,) but I didn’t mind it here because the singer, (and musician and Musical Director of this show,) Salka Sol, is fabulous. (And her first name is practically my last!) I had no idea she’s from Iceland, where she’s a big star. She reminded me of someone who would make the Top Ten on American Idol, but would erroneously not win. (And I thought of that even before I noticed Nigel Lythgoe sitting in front of me!) Salka is like a cross between that show’s Hayley Rinehart and Jax. So I was happy whenever she appeared. And she was, by far, Mr. X’s favorite part of the show. 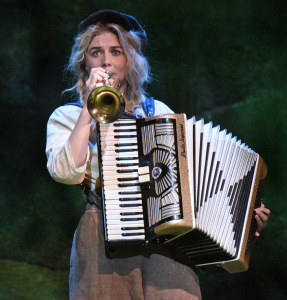 I also like that The Heart of Robin Hood appears to be a true international presentation—the cast and technical peeps are from all over. I needed an atlas to get through their program bios!

So I recommend seeing The Heart of Robin Hood at the Wallis while you have this opportunity. Just don’t expect a classic Robin Hood saga; if you’re someone who will be disappointed with this a-bit-skewed take on the forest outlaw and his cronies, just tell yourself it’s all new characters. It definitely helped me that I had no idea who most of them were supposed to be.